Battle of the AFC North: Inside Linebackers

Share All sharing options for: Battle of the AFC North: Inside Linebackers

This is the tenth article in the series. Links for the earlier posts can be found at the end of this article.

As I noted in the previous article covering the outside linebackers, the AFC North is divided not just by our loyaties but by our defensive schemes. The Steelers and the Ravens run a 3-4, the Browns and the Bengals run a 4-3. This makes it somewhat of a challenge to compare players, but it's worth a try. A post comparing all linebackers would be incredibly unwieldy, so even though it isn’t ideal to divide them this way, that's how I did it. This post will deal with the inside linebackers of both persuasions.

The RILB is Jameel McClain, who was signed as a UDFA by the Ravens in 2008. He was the only UDFA to make the roster that year. Last season he finished second on the team in tackles. The Ravens valued him enough to sign him to a three-year contract during the off-season. McClain does philathropic work for the Salvation Army in Baltimore, in part because he and his family were intermittently homeless while he was growing up, and sometimes lived at a Salvation Army shelter.

The LILB will be the very veteran Ray Lewis, who led the team last season with 95 tackles. As with James Farrior's last season for the Steelers, there is some question as to how long Lewis can continue to be effective. Like Farrior last season, Lewis dropped some weight during this offseason to hopefully add some of the speed Father Time has removed. (Lewis was a first-round pick in...wait for it...1996.)

Behind McClain and Lewis are, most likely, four-year veteran Dannell Ellerbe and ten-year veteran Brendon Ayanbadejo.

The Steelers are without James Farrior, the heart, soul, and captain of the defense for many years. His role at LILB will be assumed by Larry Foote, no spring chicken himself. He was the Steelers’ fourth-round draft pick in 2002, and other than an ill-advised one-year move to the Detroit Lions has been a Steeler ever since. Foote has an excellent understanding of the defense, and spelled Farrior frequently last season.

The RILB position is manned by Lawrence Timmons, the Steelers’ first-round pick in 2007. Timmons, it can be said with confidence, plays better on the inside. Timmons’ numbers in the stats nerd portion of the article are going to look a good bit poorer than they should by rights, as injuries to James Harrison and LaMarr Woodley and a lack of experienced depth behind them forced Dick LeBeau to move him to the outside for much of last season. Timmons should look a good deal better this season, assuming the same situation doesn’t occur.

At the moment, at least, it would seem their backups are Stevenson Sylvester, one of the Steelers’ 2010 fifth-round draft picks, and Sean Spence, their 2012 third-round pick.

On to the 4-3s. As a courtesy to the amazingly unlucky Browns, I will begin with them. I only hope they will have enough men left to field a team by the time the season begins.

D'Qwell Jackson, the Browns’ 2006 second-round draft pick, plays MLB. (In the picture above he is sacking Andy Dalton.) By his third season he was the NFL leader in tackles, despite playing out of his natural position in Eric Mangini’s 3-4 defensive alignment. After missing much of the next two seasons to injuries, he returned to a 4-3 scheme, where he has thrived.

The backup for Jackson is still up in the air, because of the suspension Scott Fujita will serve and the season-ending injury for Chris Gocong, which has forced considerable reshuffling. A prime candidate appears to be UDFA L. J. Fort, who has impressed the coaches sufficiently to apparently move him past Benjamin Jacobs on the depth chart.

Finally, the Bengals. Rey Maualuga, surely one of the scariest-looking men in the NFL, was the Bengals’ second-round pick in 2009. Maualuga anchored a very good Bengals defense last season, but as Anthony Cosenza of Cincy Jungle wrote in July:

The 2012 season is going to be crucial for Maualuga and the Bengals. If he can stay healthy and prove that his problems are behind him, he has Pro Bowl potential. He's also entering a contract year, so it's critical that he has a solid year to prove to the club that he is their middle linebacker for another half-decade or more. With all of his flaws, he's still one of the better players on a good Bengals team.

Maualuga gave Bengals fans a scare when he left the first preseason game with an "unspecified" knee injury. It turned out to be an MCL sprain, but minor enough so he is expected to play in next week’s game.

Maualuga’s backup was expected to be Roddrick Muckelroy, but Vontaze Burfict has come on unexpectedly well in camp. It wouldn’t surprise me to see a sort of MLB by committee approach if Burfict continues to develop well and Maualuga struggles at times.

So on to the stats. We don’t have any rookie starters, at least at the moment, so we’ll look at how all these men performed last season. As usual, we will begin with the NFL stats:

The only part-timer on the list, Larry Foote, was also the only AFC North ILB without an interception. Cleveland's D'Qwell Jackson is the winner in almost every category, so far.

Now let's look at some analysis on the raw numbers. First, Advanced NFL Stats. As a ranking, lower is better. It's also worth mentioning they rank all of the linebackers without distinguishing between OLBs and ILBs or defensive schemes, so there are 147 ranked linebackers on the list. 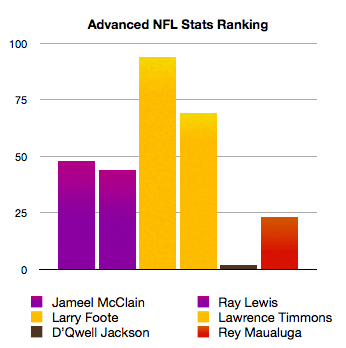 As would seem to be reasonable looking at the raw numbers above, D'Qwell Jackson was their favorite AFC North linebacker. (That isn't quite true—Jackson was No. 3, and Terrell Suggs was No. 1.)

Next up are the Pro Football Reference Average Values for the players, with career highs and the most recent year (prior to 2011) it was achieved: 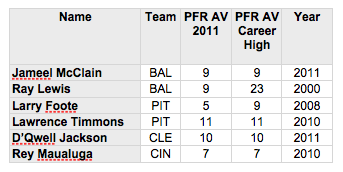 No, neither "23" nor "2000" for Ray Lewis are misprints. He's had great seasons since then, but never again achieved such a high score. Hardly anyone else has, either...

Finally, the Pro Football Focus overall ratings for ILBs. As a rating, higher is better: 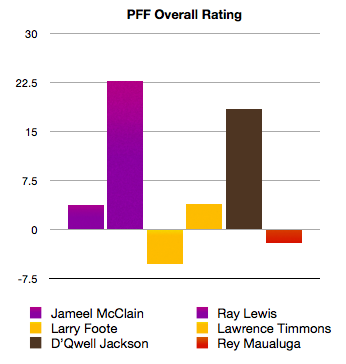 The Pro Football Focus guys like Ray Lewis a lot more than the other analysts, and D'Qwell Jackson a lot less, for that matter. (NaVorro Bowman of the 49ers was their top ILB, in case you were wondering.)

As usual there are substantial disagreements between the analysts. After all, the raw numbers don't tell the story, but everyone has their own way of interpreting the story as they use the numbers. One of the players who is hardest to pin down is Rey Maualuga. I note the same thing on Cincy Jungle, where some commenters think he is great and others believe him to be mediocre. So as usual I'm going to average out the results and then make my pronouncement.

If we go by the Advanced NFL Stats assessment, the order would be:

If we go by the PFR AVs or the Pro Football Focus ratings, the order would be:

And perhaps this is where my Steelers homerism shows, but I'm going to trade out the Ravens and the Steelers and otherwise go with the second option, thus:

Why? I just have a feeling 2012 is finally the year Ray Lewis is going to go the way of Hines Ward, James Farrior, Aaron Smith, and other legends of the AFC North. (Although in many ways Lewis is the biggest legend of them all.) If you look at Lewis's last four or five seasons you can note a gradual decline which has been picking up speed for the past few years, unlike Lewis himself. Father Time always wins in the end. And the depth behind him is not particularly impressive—although both are veterans of the Ravens' system, Ayanbedejo was not particularly impressive last season, and Ellerbe was not good. On the other hand, McClain appears to be a player on the way up, and he should help compensate for Lewis's declining production.

The Steelers have a similar issue with Larry Foote, but Foote is at least six years younger than Lewis. He was never anything like the kind of player Lewis was, even in his prime, but there are two indicators I think are interesting to consider. First of all, Foote left Pittsburgh for the ill-fated stint on the Lions because he wanted to be a starter. He came back to Pittsburgh because he decided he wanted to be on a winning team more than he wanted to be a starter, and he knew he was going to be in James Farrior's shadow. And even last year, when Farrior went quickly downhill, Foote mostly shared snaps with Farrior. This year he will be a starter, perhaps for the last time in his career. I've seen more than one comment by Steelers insiders such as Craig Wolfley to the effect that Foote is working and playing like a man possessed. I have this gut feeling we are going to see a final blaze of glory out of Foote.

Conversely, Lawrence Timmons had seriously suppressed numbers because of being forced to play out of position for much of last season. Assuming this doesn't happen again, and I don't think it will, I believe Timmons will have a great season.

Jackson played extremely well last year in Cleveland, and there is no reason (age, known injuries, etc.) to believe he won't go from strength to strength.

Maualuga is the unknown quantity, in a sense. He's playing for a contract, and this might inspire him to new heights of achievement. On the other hand, he could find himself on the outside looking in if he doesn't deal with his off-field issues, and if Burfict is as impressive as reported. A position battle which continues into the season is not going to make for stability among the defensive front.

As always, feel free to disagree, and I would love to have the perspective of fans from other teams, especially if I missed some late-breaking news.

Here are the links for the other articles in the series: