Share All sharing options for: Battle of the AFC North: Defensive Line

This is the eleventh article in the series, after a rather-too-long hiatus. But, as my momma always says, better late than never. Links for the earlier posts can be found at the end of this article.

The AFC North is divided not just by our loyaties but by our defensive schemes. The Steelers and the Ravens run a 3-4, the Browns and the Bengals run a 4-3. This makes it somewhat of a challenge to compare players, but that’s the way the cookie crumbles. So each team will have either a three-man or a four-man line, depending.

This is an appropriate point to repeat my disclaimer—I’m entirely dependent upon unofficial online depth charts, as the teams themselves have generally not committed to a depth chart for the upcoming season, even at this point. So if those of you from other fanbases have more accurate information, please do leave a comment to elucidate.

Let’s begin with the 3-4 defenses this time, and check out the Ravens:

The Ravens, as usual, make life difficult for everyone, because Defensive Coordinator Chuck Pagano has not been at all averse to throwing out a 4-3 look when he feels like it. While we don’t know whether the new DC, Dean Pees, will continue this, it would be rather surprising if he didn’t, as he was promoted from his former position as the Ravens’ linebacker coach. But I’m going to write them up as if they are a standard 3-4.

DT Haloti Ngata is a beast. Just ask Ben Roethlisberger. I expect his nose still twinges when the wind shifts after Ngata converted it from cartilage to, as the surgeon described it, cornflakes. Ngata came to camp this season ten pounds heavier than last year and promptly tweaked his hamstring during a conditioning run, but he's off PUP now, and presumably set for the season. Hali is backed up by Bryan Hall, a 2011 UDFA.

The LDE is Arthur Jones, the Ravens’ 2010 fifth-round pick, and 2010 second-round pick Terrence Cody is the NT. Cody is backed up by none other than the older brother of the Steelers’ former left guard, Ma’ake Kemoeatu. Jones is backed up by 2011 fifth-round pick Pernell McPhee. (This is curious, BTW, as McPhee looked distinctly better than Jones in the rankings I saw. Any Ravens fans have thoughts on this?)

This season the Steelers have gotten a makeover on the defensive line. It has long been the quiet repository for arguably the best front three in the league, Aaron Smith, Casey Hampton, and Brett Keisel. But age catches up to us all. Aaron Smith, after two seasons in which he sat on the bench with major injuries more than he played, has retired. Casey Hampton is still on the team, and will probably remain there for this season, but how much of the time he will actually play is a big question mark. The only real starter this season from the Steel Drapes, if you will, is Brett Keisel. And although Keisel is the youngest of the three, Father Time is catching up to him as well. His beard-growing abilities, however, seem to be, if anything, enhanced by the passing years. So whatever the various depth charts on the web may say, the starting line is almost certainly Ziggy Hood at LDE, Steve McLendon at NT, and Brett Keisel at RDE. Keisel may well share snaps with his backup, 2011’s first round pick Cameron Heyward. Hood is backed up, at least at the moment, by Al Woods, and McLendon will share snaps with Hampton when Hampton is fully recovered. They are backed up by 2012 fourth-round pick Alameda Ta’amu.

The Browns have the first rookie lineman we’ve seen, RDT John Hughes, their third-round pick. His opposite number is Ahtyba Rubin, the Browns’ 2008 sixth-round pick. They are backed up by another rookie, 2012 sixth-round pick Billy Winn and Scott Paxson. The Browns picked up Paxson at the beginning of 2011 after the Steelers waived him the previous fall.

On the inside are Domata Peko and Geno Atkins. I seem to hear those two names a lot when the Steelers play the Bengals, and not in a good way (at least for a Steelers fan.) Peko was the Bengals’ 2006 fourth-round pick, and Atkins was their 2010 fourth-round pick. They are backed up by a couple of rookies, Devon Still (second round) and Brandon Thomas (round three.) Pat Sims is actually the backup to Peko, but as far as I can tell is on the PUP list.

On the outside are Carlos Dunlap, the Bengals’ 2010 second-round pick, and Michael Johnson, their 2009 third-round pick. Dunlap is backed up by oldie-but-goodie Robert Geathers, and Johnson by Jamaal Anderson, a 2008 UDFA pickup by the Falcons who the Bengals signed this March after he was cut by both Atlanta and Indianapolis.

We have a rookie to look at first, John Hughes of the Browns. Let’s see what a scouting report said:

Cincinnati Bearcats defensive tackle John Hughes excels as a run defender and has limited upside as a interior pass rusher. Hughes plays with a very nice pad level that helps him overtake ground in the trenches and gain position.

When double-teamed, he can hold his ground and not get pancaked. Doesn't have very long arms, but uses leverage to his advantage at all times. Plays a very cerebral game from play to play. Hughes plays with a chip on his shoulder and would be an ideal fit in rotation that only keeps him on the field on first down and other run situations.

If he adds bulk to his lower half, he could improve his explosion off the line which is inconsistent at times.

Interestingly, Walter Football’s Consensus Rankings (in which they add up the main big boards to get an average number predicting where each player is expected to be drafted) had Hughes as 29 out of 30 DTs ranked. Hughes was expected to go in the seventh round or go undrafted by most pundits, so a lot of heads were shaken when the Browns took him in the third round. He was expected to merely provide depth behind Rubin or 2011 first-round pick Phil Taylor, but got pushed into a starter slot when Taylor went down with a torn pectoral muscle. Taylor is expected to be out for most of the season.

Now for the veterans. First, the NFL stats:

As usual, raw numbers don't necessarily tell us much, but they are a place to begin. Now, the ranking by Advanced NFL Stats. They don't rank every player, so a few are missing. This is a ranking, so lower is better. They separate the players (somewhat arbitrarily, I might add) into DTs and DEs. First, the DTs: 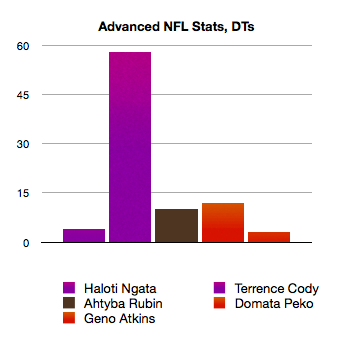 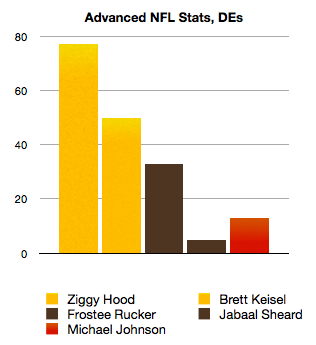 Now let's take a look at the Pro Football Reference AV. As usual I give the personal best for each player. Interestingly, in every case but one the players had (or matched) their best season in 2011: 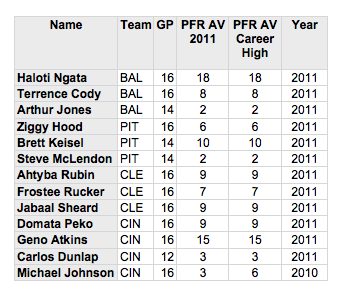 Finally, Pro Football Focus. In an article earlier this summer profiling Ziggy Hood I pointed out the widely divergent ratings he received in various discussions. PFR gives Hood a respectable (if not terribly impressive) AV of 6. Pro Football Focus considers him to be the worst DE to ever walk the face of the earth, at least during 2011. Odd, that: 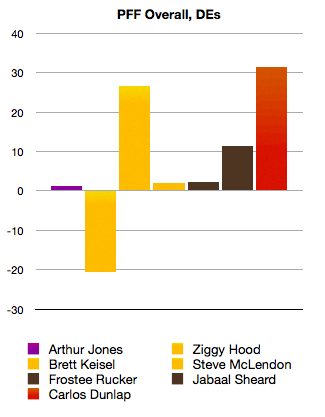 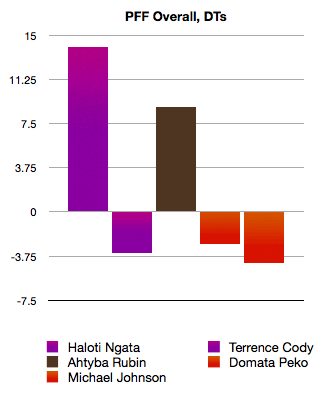 It's time to man up and look at the data. (Or in my case, woman up.) I have to admit I wasn't expecting the Steelers to look so very weak in relation to the other teams. I don't believe they will be, either, but since I'm basing my assessments off of last year's data for everyone, so be it.

Let's break it down according to the various ratings first. Advanced NFL Stats doesn't rank everyone, so we'll have to work around it. If you take the average of ranked players in both categories (DT and DE) and add them together, here is how it comes out: (NB: Despite the fact Haloti Ngata was ranked as a NT by Adv. NFL Stats I've calculated him as a DE for the purpose of this exercise.)

In case you're wondering, I assumed unranked players, unless there was reason to believe otherwise, were near the bottom of the list of 77 players ranked by Adv. NFL Stats. I assumed a rookie projected as a seventh-round pick or UDFA is probably far weaker than any of the veterans as of last year (although, of course, this may not be the case next season.) What it really boils down to is none of the teams have three or four really strong players on their defensive line, according to last season's production, so awesomeness by, say, Haloti Ngata is balanced out by not-so-awesomeness by Arthur Jones. Cincinnati blew everyone else out of the water, even with an unranked player (Carlos Dunlap.)

Now let's see how everyone looked according to Pro Football Reference. Since everyone (except the Cleveland rookie) appears on their rating, it makes life easier. I added the scores and divided by three for PIT, BAL, CLE (since they only had three ranked) and by four for CIN:

Honestly, I think the first ranking is probably closest to the mark. Whether Cleveland looks better or worse than Baltimore is going to depend almost entirely on whether their rookie plays well or not. So I put them about equal, and feel Cincinnati has, based on last's year's performance, by far the best line.

I have high hopes for the newly energized Ziggy Hood—I'm hoping he will at least not be the VERY worst DE on the PFF ratings, and perhaps even "above the line." McLendon/Hampton is going to be an interesting duo to watch next season. (For what it's worth, Hampton ranked in about the middle of the pack last year.) And if Keisel has got another great year in him, that will help a good deal.

That's all for now. We're on the home stretch. It may be difficult to rank kick teams, since BAL just cut Billy Cundiff and who knows what other changes are in store? Special teams is also tricky. And after the Michael Lombardi ranking of coaches, I'm tempted to try my hand as well. At any rate, I will put out a snapshot next week as to where each unit is now, after cuts, IRs, and so on, and see whether it changes the picture for 2012.

Here are the links for the other articles in the series: