Share All sharing options for: A Comparison Of The 21st Century Steelers Super Bowl Teams With The 2012 Steelers

My original idea for this article was to compare this year’s team with the 2011 Steelers as the season unfolds. I’m pretty pleased with myself for thinking of this in Week 3, instead of Week 11 or so, the way I usually do these things, thus setting myself up for an absolute marathon of looking up stats, setting up charts, and so on.

However, as I prepared to start writing I realized it would be even more interesting to compare this season’s team with the Super Bowl teams from the last decade. So I’m in for the usual marathon of stats and charts after all. But I think it will be worth it. I’m going to compare the teams in a number of areas. I’ll also throw in information about notable inactive players or injuries occurring during the game and suchlike.

This post will begin with Week 1, and I’ll hopefully be caught up to the current season at the end of the Bye Week, which occurs fortuitously early this year : ) I’m not prejudging the results, as I haven’t looked at a single stat at this moment. So let’s see what the teams looked like after Week 1.

2005 followed an exciting 2004 season in which the team went 15-1, but culminated in a heartbreaking conference loss to the Patriots. After a 2005 preseason in which the Steelers were unable to score a single touchdown, the men in black and gold stilled the fears of Steeler Nation with a convincing win against the Titans. The game was the debut of RB Willie Parker, who ran all over the Titans. The 161 yards he gained was the most ever by a Steelers back on opening day. Parker also had a 48-yard reception. Troy Polamalu and Ricardo Colclough both had a pick, and Chris Hope and Ike Taylor recovered a pair of fumbles.

Parker was playing in the first place because of injuries to Jerome Bettis and Duce Staley. These were the only notable injuries I could see—I haven’t found a straightforward way to get the inactives for games that long ago, and I don’t know all of the players from that era. Those of you with great memories, feel free to add any corrections in the comments.

Roethlisberger was 9/11 on the day. His 11 passes were the fewest thrown in a game by the Steelers since 1977. On the other hand, 18% of his passes resulted in touchdowns, a pretty good number by any measure. The TDs were hauled in by Heath Miller and Antwaan Randle El.

The Steelers began the 2008 season as the defending AFC North champions, but a division crown is never enough for either Steeler Nation or the Steelers organization. Unlike 2004 they did not even make it to the Conference game in 2007, having lost a close game to the Jaguars in the Wild Card round. (Unlike 2011’s Wild Card game, the Steelers lost at home.)

The Week 1 game was the debut of Rashard Mendenhall, who had 10 carries for 28 yards. Mendenhall would be the only rookie to start even a single game in 2008. Mendenhall also returned two kickoffs for 27 yards and 19 yards.

Parker had another superb game, gaining 138 yards on 25 attempts, with three TDs. Roethlisberger was 13/14 for 137 yards and two touchdowns. Both TDs passes were hauled in by Hines Ward. LaMarr Woodley and Troy Polamalu both registered interceptions, and James Harrison forced a fumble, recovered by LaMarr Woodley.

No one of note was missing from the game. A number of Texans were injured during the game, and frequently the name appearing in parenthesis on plays in which a Texan was injured (indicating who made the stop) was one J. Harrison.

2010 began with the four Roethlisberger Shaming Games. No one gave the Steelers much of a chance during the first quarter of the season, except the Steelers themselves. After all, the 2009 Steelers were 9-7 after a humiliating mid-season collapse and didn’t even make the playoffs. However, the Steelers stunned the visiting Falcons and picked up an overtime win to give them their eighth straight opening day win.

Rashard Mendenhall scored the sole TD for the Steelers, and the Falcons didn’t even manage that. The teams were tied with three field goals each, and Mendenhall’s TD was on a 50 yard run in the first Steelers possession of overtime. (The Falcons had won the overtime coin toss, but a holding penalty on ATL forced them to punt after getting a single first down.) At the end of the day Mendenhall had 120 yards on 22 carries, as well as two receptions for 15 yards.

QB Dennis Dixon threw for 236 yards in 26 attempts, with a 69% completion rate and one interception. Troy Polamalu evened things up with an interception of his own. Jeff Reed's first field goal was a 52-yarder, the longest NFL field goal made in Heinz Field history. However, Reed was 3 of 5 on the day. Fortunately the Falcon's kicker missed an attempt as well. Either kicker could have won the game in regulation.

Once again no one of note was missing from the lineup, except for the unfortunately extremely notable Ben Roethlisberger and the originally projected starting QB, Byron Leftwich. Leftwich was injured during the final preseason game. Of course, a notable injury for the season was RT Willie Colon, who tore his Achilles during the offseason. He was replaced by Flozell Adams, an old Cowboys castoff who had been a penalty machine at LT in his later years in Dallas. Many people thought this was a bad idea.

I won’t bother to recap the 2012 opener, which is still painfully fresh in all of our minds, I’m sure. I will just note it was the only away game of the four under consideration, and a great many notable players were missing, including James Harrison and Ryan Clark. At some point during the game Troy Polamalu was injured, although he didn’t come out of the game. Two fifths of the starting offensive line was injured and left the field, never to return. As a result, more than half the game was played with no backup offensive linemen, always a scary proposition given the Steelers’ propensity for ripping through them.

Now for the geeky, stats-laden portion of our program: 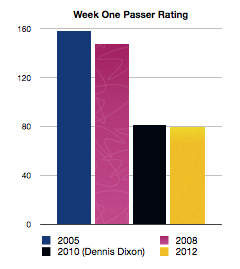 Average Gains per Attempt for Passing and Running Plays: [Note that passing plays include sacks] 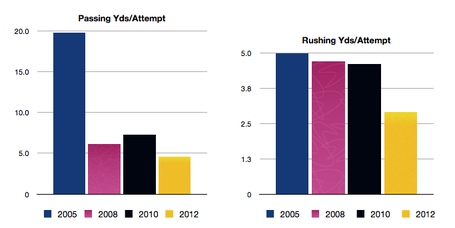 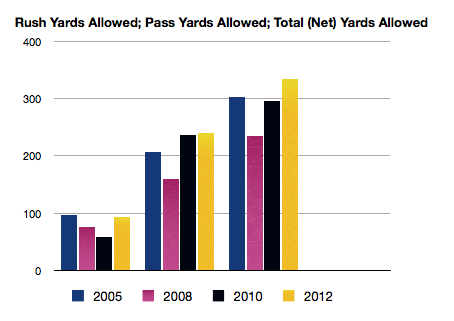 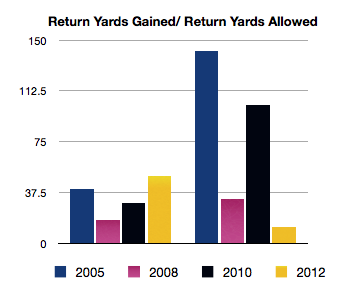 Well, that's Week 1. If you can think of other things it would be interesting and relevant to compare, put them in the comments and I'll take it under consideration.