A Comparison Of The 21st Century Steelers Super Bowl Teams With The 2012 Steelers, Week 2

Share All sharing options for: A Comparison Of The 21st Century Steelers Super Bowl Teams With The 2012 Steelers, Week 2

As noted in the Week 1 post, I’m behind by a week because I didn’t think of this idea soon enough. I’ll be caught up after next week, as I will post the Week 3 data during the Bye Week. You can find the Week 1 post by clicking the link if you missed it.

Unlike Ryan Mundy, I'm aiming right for the numbers:

By winning this game the Steelers had 16 consequtive regular-season wins, matching the record of the 1971 and 1983 Dolphins for second-best all time in the NFL. [The top such record was held by the 2004 Patriots, who won 18 regular season games in a row before Pittsburgh took them down.]

Roethlisberger was questionable to play because of a knee injury, but had a second stellar game. This made him 15-0 as a starter in his career.

The Texans decided to wear their road whites at home and open the roof of their stadium. The temperatures in the stadium started at 110 degrees and continued to rise, but it didn’t appear to faze the black-clad Men of Steel. The Texans, on the other hand, never even scored until the second half. Part of the problem may have been the eight sacks they gave up to the Steelers’ defense. Troy Polamalu had three of them.

Jeff Reed’s second of two field goals on the day was his 21st consecutive successful attempt, which was a Steelers record. Willie Parker was still the starting back, as neither Bettis nor Staley had returned from their injuries.

The Steelers had won 15 of their previous 16 games against the Browns, and this game would not be the exception. As usual, it was a low-scoring, last-minute affair as Cleveland was within four points and had the ball in the last minute. Phil Dawson, the Browns’ kicker, was Cleveland’s MVP, scoring the only points Cleveland would earn in the game. This would not be the last time Dawson has scored the only points... Winning this game meant the Steelers had won 10 games in a row against Cleveland, the longest such streak in the NFL at the time.

Brett Keisel was injured during the first quarter. This is a remarkably small number of injuries for a Browns-Steelers game.

Rookie Antonio Brown announced his presence to the league by taking the opening kickoff 89 yards for a touchdown. Neither team would register a touchdown after that until the fourth quarter, but Jeff Reed had been busy in the meantime, making four field goals in four attempts.

QB Dennis Dixon left the game in the second quarter with a sprained knee, and Charlie Batch would finish the game. The game was considerably more comfortable for him than it was for the Titans’ QBs, as the Steelers defense sacked whoever Jeff Fisher stuck in at quarterback and forced seven turnovers. (Vince Young was benched by Fisher after turning the ball over three times; Kerry Collins, who replaced him, would give up two more interceptions.) Chris Johnson had his league-best streak of 12 100+ rushing games ended, with the Steelers holding him to 34 yards.

Max Starks and Casey Hampton were both out of the game, and were replaced by Jonathan Scott at LT and Chris Hoke at NT. James Harrison had three sacks, and Super Polamalu made an appearance as Troy flew over the line of scrimmage on a Titans’ goal-line stand, taking down Kerry Collins and forcing the Titans to settle for yet another field goal.

The game against the week-one leaderboard winner, score-wise, was a relief for Steeler Nation, who had not been overly impressed with the team they saw in Denver in the first week. To everyone’s relief, the starting offensive line made it through the whole game without Marcus Gilbert falling on anyone’s knee. (If we could just get him to fall on the opposing players we might have a new secret weapon.) Mike Wallace’s hold-out didn’t hold him out of the endzone, nor did he forget to notice where the out-of-bound lines were. Ben Roethlisberger looked in control of the Haley offense, and the Polamalu-and-Harrison-less defense did what was necessary, although they didn’t particularly impress, other than Ryan Clark, who apparently felt his absence in Denver required him to win the Jets game single-handed. But for the second week in a row the running game failed to - er- get off the ground, although Todd Haley’s insistence on running the ball anyhow was either admirable or stubborn, depending on your viewpoint. Fortunately, Roethlisberger was unstoppable on 3rd-and-long. (His 125.1 passer rating for the game is the highest ever allowed by the Jets under Rex Ryan.) And from the look of things, it’s a good idea for Roethlisberger to get plenty of practice at 3rd-and-long, unless Rashard Mendenhall can somehow galvanize the ground game.

The win gives Pittsburgh the longest active streak in the league for home opener wins, at 10. Ben Roethlisberger surpassed 27,000 yards passing during the game, putting him second only to Terry Bradshaw. He needs less than 900 yards to move past Bradshaw into the No. 1 spot.

Now on to the stats and charts. From now on I will keep a season cumulative total of each stat presented in addition to the totals for the week under consideration. These will be for the season to this point—for instance, the passer rating season average is the average of weeks one and two, so they will update each week, even for the previous seasons. I think it will be interesting to see how the teams develop each season. 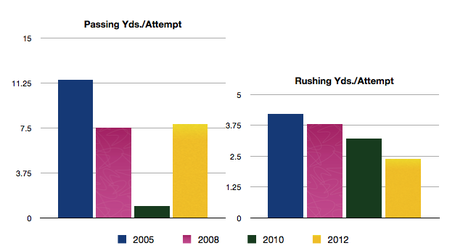 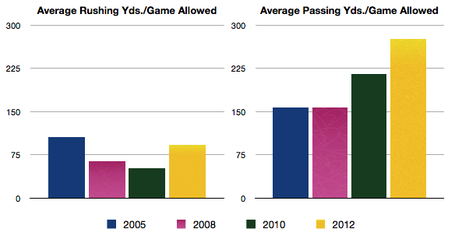 Week 2 Cumulative Turnovers/Takeaways Margin: (This is the difference between the total number of takeaways by the defense and turnovers by the offense. If no bar is showing it is because the total thus far is zero. For example, Ben threw a pick in the 2012 Week 1 game at Denver, but a special teams forced and recovered fumble brought the margin from -1 back to zero. In 2012 Week 2 Ryan Mundy recovered a muffed punt, and the offense didn't cough any up, so the total is now one.) 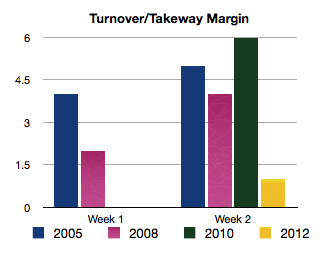 Ratio of Field Goals to Touchdowns:

And finally, Average Points Per Game: 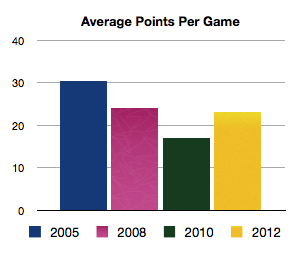