Big Ben and Heath Miller led their respective positions in fantasy scoring, and many BTSCers had a banner week with them leading their rosters. Get your Week 4 picks in before 8:20 pm tonight (kickoff for Browns vs. Ravens).

We're back for another week of Pick 6 Football! If you've missed it, it's a relatively new little fantasy football game from SB Nation that's very easy to pick up - you start with a clean slate each week and your job is to pick six players that fit under your salary cap. It's set up so each site has it's own scoreboard, and it's just some fun, friendly competition in our BTSC community. You need to get your picks in before 8:20 pm tonight - kickoff time for Thursday Night Football between two teams that no one really cares about. 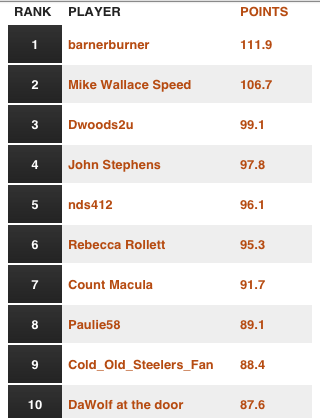 Excellent evaluating (or homerism) led to Big Ben and Heath Miller each being on six of the above rosters, and it paid off huge as both of them led their respective positions in scoring. Unfortunately with the Steelers on their bye, we'll have to figure out some other way to dominate again this week.

After my Week 2 picks stunk up the joint, I shot back to the top with solid performances across the board. I didn't have Ben - opting for Andrew Luck instead at half the price - but got lucky hitting on A.J. Green, who turned out to be the top-scoring receiver.

I thought it would also be interesting to take a look at the top performers at each position and see if it would've been feasible to field all five of them (and if there would've been enough cap space remaining for the Wild Card spot).

If you haven't joined in yet, you should this week - the game has been updated so you can sort every player in a position based on high- and low-priced guys, and also top performers from the previous week and for the season. Scoring isn't too far off from the standard set-up for fantasy football, and you can read more on that here.