This should have come out earlier in the week, especially this week, as the Browns and Ravens have already played their Week 4 game. But we'll ignore that for the moment and take a quick look at how the AFC North finished in Week 3. First, the record:

Yes, friends, the Steelers are in firm control of the No. 3 slot in the AFC North. How can this be? Let's take a look and and see if we can figure it out:

Here is how the AFC North quarterbacks stack up at this point in the season. I've used the average QB rating for weeks one, two and three. Here it is: 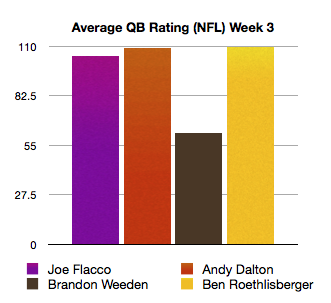 I also decided to add another feature, the Pro Football Focus Quarterback Rating. As they say, "Offering an alternative to the out-dated standard, we take into account dropped passes, throw aways, spikes, and yards in the air and further adjust the old formula so it makes more sense and is a more accurate measure."

I was curious how this metric differed from the NFL one. Of the top 10 quarterbacks, three of the PFF ratings were higher and seven lower. Of the next 10, five of the PFF rankings were higher and five were lower. Of the final 12, eight were higher and only four were lower. In fact, the final five (Ryan Tannehill, Michael Vick, Josh Freeman, Brandon Weeden, and Jay Cutler) were all higher, some substantially. Offhand I'd say these gentlemen's receivers aren't doing them any favors. As you can see, Flacco, Dalton, and Roethlisberger all have a lower ranking from PFF than the NFL number. 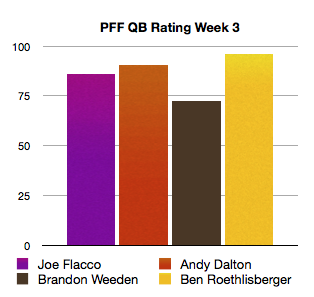 The Pro Football Focus guys ranked the quarterbacks according to this measure, league-wide. Ben Roethlisberger is No. 6, Andy Dalton is No. 13, Joe Flacco is No. 17, and Brandon Weeden is the lone QB before Jay Cutler, at No. 31.

On the Interception Watch, so far Ben Roethlisberger is the winner, with one; Joe Flacco has two, Andy Dalton three, and Brandon Weeden comes in with an impressive six. I gather the NFL is now collecting a stat for "Almost-Intercepted," but I haven't checked that out. Frankly, if you start counting things that didn't actually happen, you're going to be awash in a sea of data eventually.

As the above information from PFF indicates, it takes two to tango. And poor Brandon Weeden is pretty much a wallflower at the moment, still leading the pack in dropped balls. I decided it might make more sense to put out a "drop rate" for all the receivers, for Week 3 and for the season, rather than just a cumulative number, which doesn't tell you as much: 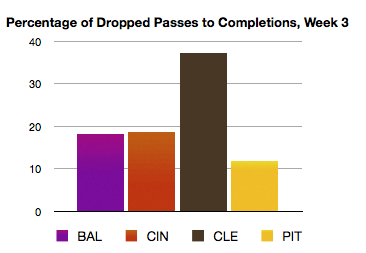 If the receivers are dropping close to a third of the passes Brandon Weeden is putting out there, it's no wonder the Browns aren't winning any games.

I had a look at Pro Football Focus to see who were the winners and losers in individual drop rates for receivers. Most of the receivers for BAL, CIN and PIT have no drops of what PFF deems "catchable" balls. This includes three of the four principal TEs, although surprisingly that would be Ben Watson of CLE rather than Jermaine Gresham of CIN, who has two drops in 14 catchable targets. Mostly, it's easier to look at who is dropping balls at the moment:

and the big-time winner:

Notice whose receivers aren't dropping anything at all? That's right, Baltimore. The rest of the AFC North are presumably fervently hoping this changes, and soon!

Well, we know the Steelers' running game isn't improving as of Week 3. Let's see about the rest of the division. These are season average stats as of the end of Week 3: 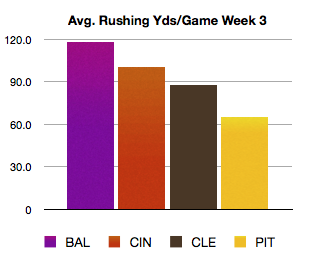 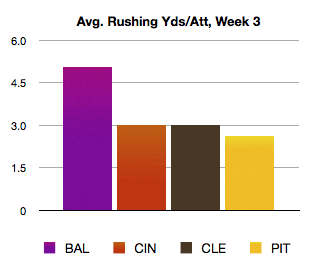 The Steelers still have both the least abundant and the least successful running game. I suppose the only comfort we can derive is CIN and CLE are inching closer to our futility level. Hopefully things will improve for the Steelers after the Bye Week.

To this point, no defense is showing up in a typically ferocious, AFC-North sort of way. The NFL ranks the defenses this way:

Here are charts for Passes Defensed, Sacks, and Turnover/Takeway Margin. (All are cumulative.) 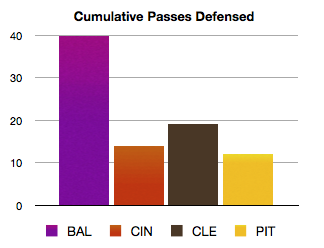 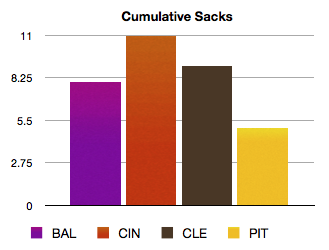 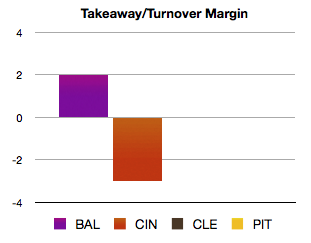 (CLE and PIT are at zero, hence their bar doesn't show up.)

The only teams so far to have a Special Teams touchdown, or to have given one up, were playing each other at the time; (CLE special teams gave up a touchdown to CIN.) But otherwise Cleveland's return game beats the rest of the AFC hollow: 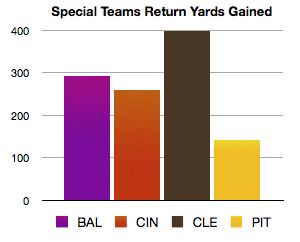 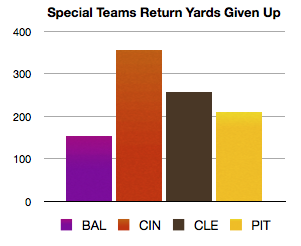 So far the kickers are equal, with 100% success rate on field goals. As we all know by now, that will change in Week 4, at least for the Ravens, but we'll deal with that next week.

Thanks to a questionable call by the referees, the Ravens stay tied with the Bengals for first place in the division. Thanks to the Browns, the Steelers are not tied for last place.

Joe Flacco is, I have to say, playing well for the most part. I still find it incomprehensible that the Ravens are content to keep Ray Rice on ice for the majority of games when it seems every time he touches the ball he rips off five or six yards. But perhaps, as Cam Cameron was quoted today, they are trying to keep him fresh. And, after all, they are 2-1 now (and, as we all know, actually 3-1.) For all of the talk about the defense being not what it has been, I see the Ravens as the most balanced team right now, unfortunately.

Brandon Weeden would probably look a lot better if the Browns had taken some trouble over getting him a few receivers who can hold onto the ball. Greg Little is a great physical specimen, but for every great catch he makes he drops one—or nearly. It rather painfully reminds us of another large, physically-gifted receiver who never overcame this problem. The rumors are Little may be demoted, but with Massaquoi out and Cribbs concussed, they may not have any choice but to run him out there and pray. Or wave for PI calls...

Andy Dalton doesn't seem to be suffering from any sort of sophomore slump. He's got some great receivers as well. And although the defense is giving up a lot of yards, their sack rate is unbelievable.

As for the Steelers, who knows? I'm a bit concerned about the number of penalties the team is garnering, and it seems as if special teams is giving up a lot and not getting it back. Here's hoping the Bye cures all ills, including Harrison's knee and Polamalu's calf.

As for predictions this week, you can take this one to the bank - the Ravens are going to beat the Browns on Thursday night football. Given that I had a spectacular fail rate of 100% on last week's predictions, I think I'm going to stay out of the prognostication business from now on.