Much has changed, both in the NFL and in video games. There was a brief, shining point in time in which the universe opened and we caught a glimpse of nature's sheer, awesome power. That was Lawrence Taylor in the Tecmo Bowl series.

Share All sharing options for: The Most Dominant Player in the NFL and in video games of the past

Debating who the most dominant player in the league forces us to look back in the past to determine a measuring stick.

There are many who believe Bo Jackson is the most dominant video game player of all time. I've ardently denied this over the years, attributing Super Tecmo Bowl Bo's incredible abilities to more slanted offensive side propaganda by the brainwashed masses.

Bo was good, no doubt. Bo doesn't hold a candle to Giants OLB Lawrence Taylor in either of those games.

Does EA Sports' John Madden Football series have anyone like that in their 2013 version? Is it even possible? Or did we learn as a society some primal forces of nature can be unleashed upon the world, does that mean we should?

Lawrence Taylor in the Tecmo Bowl series was as unleashed a beast as we've ever seen. That's with all due respect to Bo Jackson.

Taylor had an entire glitch appear because of him. With the game's limited technology and the lack of understanding of the legendary football game Tecmo Bowl, Extra points and field goals consisted of six players lined in gaps extending from the outside of one hash to the outside of another. Two players appeared to be playing in two-deep coverage for the field goal, and begin the play in a three-point stance. 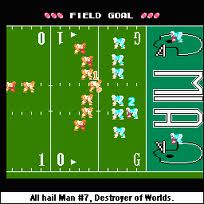 As you can see in the picture, the player labeled with the "2" over his head lines up directly behind what would appear to be the 7-technique defensive end on the play.

That was the team's outside linebacker in the game. That was Lawrence Taylor's spot.

Lawrence Taylor was without question the most dominant defensive player in either version of the game, but in the original, before the formation itself was tweaked by the creators, Taylor could rush from this spot, straight through the C-gap and maul the holder (sometimes the kicker too if you could time it well).

Such an advantage cannot be ignored, even for the likes of Bo, who, in the Super Tecmo Bowl version, could be rested to Good or Excellent health during a season and be seen to rattle off 1,000 yards rushing in a single game.

Kicking wasn't an option against the Giants. And against poor teams like Minnesota, with slow-ass Herschel Walker in the backfield and a cripplingly painfully slow end-around to WR Leo Lewis, Taylor could stand up at the point of attack and take on blocks as well as his defensive linemen.

Taylor created so many mismatches, and when going against teams that only have four plays to choose from, knowing he could single-handedly blow up one of those plays, you have that much more of a chance of selecting your opponents play (which is like taking HGH with dramatic results occurring within seconds).

Bo still had to run the risk of working his way out of a correct defensive play selection.

Taylor not only didn't need the play to be selected, he set everything else up for his teammates with his ferocious backside pursuit of every play. And you couldn't game plan him. You couldn't put three guys on him like they did in the mid-1980s.

While Bo Jackson (and Christian Okoye) can enter the discussion as the best video game player ever, Lawrence Taylor was the most dominant.

So who's the most dominant NFL player today, both on the field and in Madden 13? Weigh in by clicking here and making your argument.