The Pittsburgh Steelers are a team committing themselves to improving their running game in 2013; however, at the moment, they don't have a single running back under contract.

When the Pittsburgh Steelers declared they would waive Chris Rainey on Thursday, they essentially released the only running back under contract for the 2013 season. This fourth installment of a series exploring the team's options regarding its players and the NFL salary cap, will attempt to cover how the Steelers might fill those empty roster spots.

We began by restructuring the three highest salaries on the payroll: Ben Roethlisberger, LaMarr Woodley and Lawrence Timmons. We also estimated budgets for reserve quarterbacks and linebackers, and covered the release of Rainey. We were finally under the cap when we left off last, however the picture is about to start getting cloudy as Pittsburgh has begun filling its off-season roster, which will reach upwards of 90 players. Here are the numbers to this point: 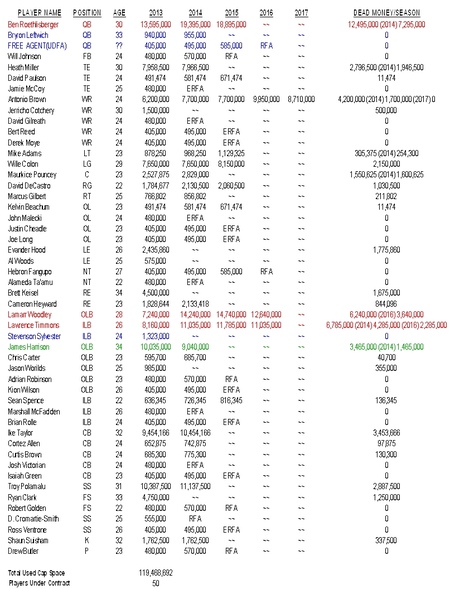 We have no restructure opportunities in this group. If Rainey really is about to be released following the Super Bowl, the closest thing to a running back remaining on the Steelers 2013 roster is fullback Will Johnson. Johnson is playing on an undrafted free agent contract from last season, and is all but cemented into the 53-man roster as his performance led to a progressively increased role in the offense.

Normally, a team without a single player at a specific skill position would address such a need in the NFL draft. Pittsburgh is set to select 17th, but have multiple first-round worthy needs across the roster. Without a flock of quality franchise backs projected for selection, the Steelers are more likely to find one in a later round, or amongst the hundreds of players who go undrafted.

The Steelers are more likely to re-sign guys who played significant roles in 2012. If you will pardon my speculation, I will provide my reasoning for who I believe Pittsburgh will be bringing back.

Let's start with who will not be coming back - Rashard Mendenhall. His departure will have nothing to do with his ability or athleticism. The Steelers simply cannot afford to offer him what he will expect. Rumors have placed estimates between six and eight million dollars per season. Mendenhall has failed to finish two of his first five seasons, including a torn ACL at the end of 2011. With the Steelers being in such tight quarters cap-wise, they will be unable to gamble new money on the possibility he can stay healthy. It is highly unlikely Mendenhall goes unwanted in free agency, leaving little hope of keeping him at a reduced rate. With Mendenhall gone, the team will have to focus on the guys who are left.

Baron Batch ended 2012 on injured reserve after breaking an arm against the Cincinnati Bengals in week 16. He is an exclusive rights free agent this season. An ERFA is a player whose contract expired before accruing three seasons. Accrued seasons are years in which a player was an active participant in at least six games. ERFA tenders are based on the number of seasons accrued by the player. Here are the projected ERFA tenders for 2013:

After spending his rookie season on injured reserve, Batch appeared in a majority of the 16 possible games this season. His two accrued seasons schedule him for a $555,000 tender. Teams have the right to negotiate long term contracts with their own ERFAs, but the Steelers are most likely to wait until 2014 to make a decision toward Batch's future with the organization. For 2013, he will be the sole third-down back, no longer required to split snaps with Rainey.

Jonathan Dwyer became the starting running back in Pittsburgh following a fumble-filled loss to the Cleveland Browns in Week 12. Dwyer also started two games earlier in 2012, gaining over a hundred yards in both against the Bengals and Washington Redskins. Dwyer is a restricted free agent, and is expected to be the Steelers starter in 2013, if not longer. There are three possible options in Dwyer's case.

Ultimately, Pittsburgh needs to decide how highly they value Dwyer, a sixth round draft selection out of Georgia Tech. If the Steelers feel he is replaceable but wish to retain him for his familiarity with the offensive system, they will offer him a second-level tender demanding at least a future sixth round selection as compensation from another team for signing away their projected starter. If the Steelers are looking at 2013 as an uninterrupted audition for Dwyer to be the feature back unopposed, they may want to insure him a little further by offering him a third-level tender requiring a compensatory second-round pick. A first-round compensation would be unlikely because of its added weight toward the cap, and few teams would view Dwyer as being worthy of a first-round draft selection. The more probable option would be the third-level tender of $2,032,088, if Dwyer is valued as a long-term possibility.

The third option for Dwyer is to offer him a long term contract now. The expected value of such a deal would be lower based on his current statistics. Should Dwyer have a breakout 2013 season, any contract offers would be driven much higher. A multiple-year deal could be structured to hit the cap lightly in the beginning of the contract, with the only real holdup being the amount and distribution of a signing bonus. Here's an example:

Dwyer may want more as a starter than what this example provides. For projection's sake, we'll label him with the third-level tender - the most expensive of the three options presented here.

The one player in danger of going unsigned is Isaac Redman. Redman is also a restricted free agent in 2013, but at 29 years of age, he should hold little hope of Pittsburgh offering him anything more than an RFA tender. He will most likely receive the minimum level tender, only giving the Steelers the right to match any offers received by Redman from other teams. Redman was an undrated free agent himself, meaning there is no value in an original round compensation. His role as the backup running back leaves little chance the Steelers will feel a need to insure his tender with high round compensatory picks, or for them to pay him the amounts required with such a tender.

Based on current draft mock-ups, franchise running backs are not expected to be on the Steelers menu - at least not in the early rounds. We will fill the third running back hole on our ledger with Redman at a first level tender of $1,323,000. Should Pittsburgh draft a running back or find an undrafted project, the value of the new players contract would be less than the amount of Redman's tender, giving the Steelers a few extra pennies to work with cap-wise.

Because of the three tenders offered in this post, we are back over the salary cap; but we are also beyond the 53-man limit. As more players are signed to camp invitations, we will continue to exceed the limits. In the next post, we will begin formulating a projected cut list to keep the roster counted against the cap at the season limit of 53. 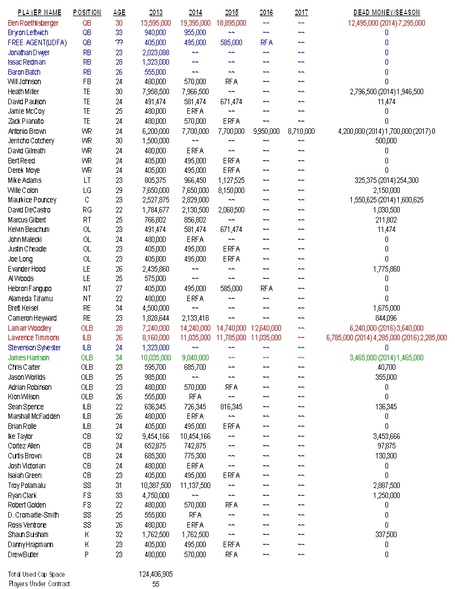 A few new names were added to the list with the signings of Danny Hrapmann and Zack Pianalto. I also corrected three errors. I had incorrectly estimated the futures contracts of Kion Wilson and Ross Ventrone. I also discovered inaccuracies with the numbers associated with the contract of Mike Adams. These corrections have been made and are reflected in the most recent list's totals.

If the Steelers are to improve upon one of the worst rushing seasons in team history, they will need their running backs to step up their game. To further address the situation, Pittsburgh will also have to field the best possible offensive line to open holes for those backs. Next time, we will focus on the men upfront - especially Willie Colon.