Pittsburgh has several key players whose contracts will demand special attention this off-season. Possible releases could consume one of the Steelers starting safeties - maybe both.

Suspicious minds are examining veteran contracts after general manager Kevin Colbert declared the Pittsburgh Steelers were "married" to no one. Key figures from championship rosters of the past are finding their careers exist on a bubble inflated with nostalgia.

As we continue our positional exploration of the 2013 roster and its compliance with the NFL salary cap, we have already recognized two highly paid players on the bubble list - Willie Colon and James Harrison. Opening the safety group reveals two more players whose tenures are in question, both starters - Troy Polamalu and Ryan Clark. 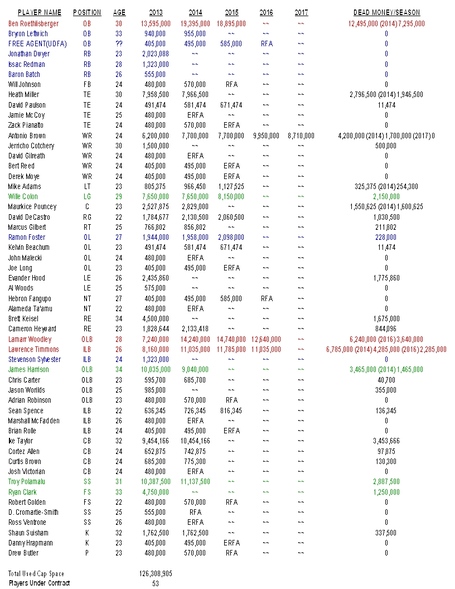 Polamalu, Pittsburgh's long-haired legend, missed nine games in his tenth NFL season. Despite healthily starting every game in 2011 and the final five contests of 2012, some have come to label him as injury-prone. Polamalu has played in 130 of 160 regular season games since being drafted in the first round of the 2003 NFL Draft. He has appeared in every possible game for five of his ten seasons.

At 31 years of age, one would assume he should be able to fulfill his contract, which has two years remaining; but people are questioning whether the Steelers should honor his contract, which accounts for the fourth-highest cap hit in 2013, based on a perceived uncertainty surrounding his ability to play an entire season, as time continues to erode the abilities which make him unique and dominant.

Polamalu is scheduled for cap hits of $10,387,500 (2013) and $11,137,500 (2014), but only $2,887,500 of each year is considered dead money - residual cap designations from signing bonuses which cannot be reassigned or restructured. With dead money being considerably low in ratio to base salaries, his contract has a wide range of options toward clearing cap space. We will focus on three.

First, Pittsburgh could release Polamalu - fear of injury or not - to clear some cap space in 2013, and all of his hit against 2014. His dead money would accelerate to a penalty of $5.775 million against 2013, but the Steelers would save $4,612,500 from his originally scheduled cap hit, while completely erasing his hit in 2014. The biggest problem with parting ways with Polamalu is the fact Pittsburgh doesn't have a definite replacement on the roster yet, leaving many to believe the Steelers will draft a safety early in the upcoming draft.

Should Pittsburgh decide to keep him for one more season, allowing a possible draft pick to understudy a future hall-of-famer, they could restructure his contract. Normally, team's don't restructure two year deals, but it would save some cap dollars without losing him in 2013. Should the team restructure $6.4 million of his $7.5 million base salary into a signing bonus, they could charge half ($3.2 million) to 2014, saving an equal amount in 2013. If Polamalu wants to play in 2014, the Steelers could offer him an extension without its own signing bonus, giving them extra years to spread restructured money across. An extension would allow the team to deal with a reduced dead money penalty in 2015, covering only money restructured out of 2013 and 2014.

The third option is to do nothing, allow him to play out 2013 and make the same tough decision prior to 2014, only with half of the penalty when considering release or retirement. The Steelers will most likely wish to retain him somehow, because all of the remaining safeties on their roster fit the mold of Clark, more than they do Polamalu.

The group of reserves behind the starters has only one member who was on the 53-man roster to open the 2012 season - Robert Golden. Golden saw most of his action on special teams and spot slot duty in defensive packages late in the season after Ike Taylor, Curtis Brown and Keenan Lewis began dealing with injuries. His flexibility between safety and corner make him a valuable player, but he will need to show more improvement before being considered as a possible starter.

Da'Mon Cromartie-Smith has spent the past several seasons bouncing between the Steelers active roster and its practice squad. He will need to have a tremendous training camp as he will not only be expected to outshine any incoming draft picks to earn the spot behind Polamalu on the depth chart, but also make Pittsburgh forget about their two top reserve safeties from 2012 - Ryan Mundy and Will Allen.

Allen re-endeared himself to the Steelers when he took over for a struggling and unproductive Mundy as the team patiently awaited Polamalu's recovery. Both Allen and Mundy are about to become unrestricted free agents. Unfortunately Mundy's performance has not warranted another contract, and Allen's years of experience will demand too high of a contract even at CBA-mandated minimum, because of the team's position in regards to the salary cap.

Even Clark could become a cap casualty in 2013 - the final year on his contract. He is the least likely to be released of our bubble list players, but after dealing with a couple of concussions in 2012, his physical style of play is taking a toll on his longevity. The only real option outside of doing nothing at all, would be to release him. Subtracting his dead money from his originally scheduled cap hit saves $3.5 million dollars against the cap. Clark was one of the biggest reasons for pass-defensive success as players were repeatedly subbed in for injured men this past season. However, as Colbert said, the Steelers aren't married to anybody anymore.

Little has changed, outside of adding both Polamalu and Clark to our bubble list. After positional breakdowns have been explored, the bubble list will be revisited to determine which players are preventing the club from being cap compliant. Our cut list remains the same as well, however it won't remain this way for long.

Even if Pittsburgh does not sign any free agents other than their own players whose contracts have expired, there are at least seven more players which have to be accounted for in our cap math - our upcoming draft picks. The following numbers are merely estimates - budgets to accommodate for eventual insertions. The Steelers are slated to select 17th. These figures were calculated by using the contracts of the 16th selections from each round of the 2012 draft, with an additional $15,000 per season of base salary to compensate for the league-wide increase in salary cap, rookie and veteran minimum scale, and tags and tenders. These estimates will be updated once actual contracts have been signed.

The biggest question now, is where to assign these numbers to our 53-man ledger. We will include these numbers to insure we maintain our relativity to the cap in reality. I will let the readers decide where to assign these designations. The poll below asks which position the Steelers will draft with their first round pick. Whichever position the majority selects is where we'll insert the draft selection and make any necessary cuts to make room for the new player.

In our next installment, we will insert our first draft pick and explore another group of multi-taskers. Safeties are required to support run defense and cover pass receivers. On offense, tight ends are expected to block defenders and catch passes. In Pittsburgh, a tight end is arguably the most important player of his team's offensive unit; but his injured knee will make his contract one of the most glaring issues for the Steelers front office.