Among several potential targets the Steelers may have with the No. 17 overall pick in this April's draft, we break down Ohio State's Johnathan Hankins, a big defensive tackle who's size and ability to anchor against a double-team could make him a valuable addition.

It is no secret that Pittsburgh's General Manager Kevin Colbert has shown some recent trust in the Ohio State Buckeyes and their ability to produce quality talent. The Steelers have drafted at east one Buckeye in the last three drafts.

The top player from Ohio State in this upcoming draft just happens to fit a major need for Pittsburgh. Johnathan Hankins is a defensive tackle for Ohio State and he is no small man at 6-foot-3 330 pounds. Hankins draft stock continues to be in flux. He was considered back in September as high as a top five player in the 2013 draft class.

His junior season ended with 55 tackles, (four TFL) and one sack. As of January he was the No. 9-rated player on Mel Kiper's big board but there is much debate in draft communities about where he should be ranked.

Johnathan Hankins has lined up in every position along the defensive line for the Buckeyes. He has the body type NFL teams look for in a NT, carrying a majority of his weight in his lower half. Hankins' physicality and power, both in his upper and lower body, are elite. He shows surprising lateral agility for a man his size. An unnoticed portion of Hankins play is his great ability to read plays while engaged. The following plays will be used to highlight the qualities Johnathan Hankins possesses to be a nose tackle in the NFL. 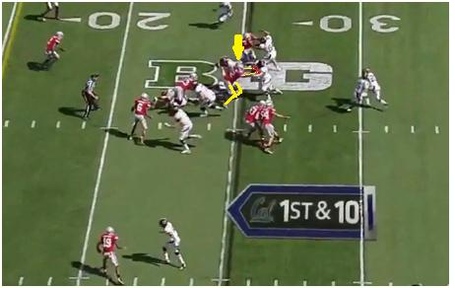 In this first image Hankins displays text book technique; his knees are bent, he is lower than the offensive lineman in front of him, he pushed back the lineman a full yard creating a new line of scrimmage but most importantly his hand are on the inside grabbing the chest plate of the lineman and his arms are fully extended allowing him to read and react to the play. 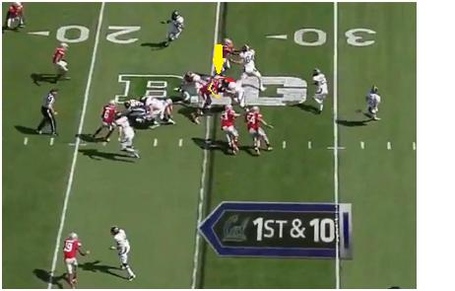 As the play continues Hankins sees that the play is a run to the right. This is where he disengages from the block. With his left hand he pushes the lineman right while his right hand (highlighted in yellow) goes over the top executing a swim move (highlighted by the red arc). Eventually at the end of this play Hankins helps with a group tackle a half of a yard behind the line of scrimmage. 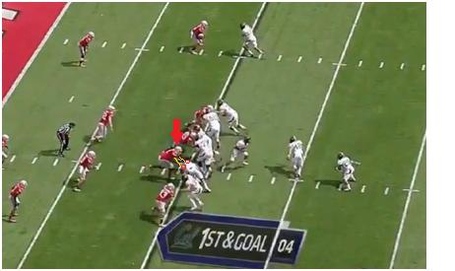 This play shows an underrated skill needed for a defensive lineman. In this image Hankins is lined up of the outside shade of the guard. The guard attempts to cut Hankins, but Hankins uses his hands and balance to stay on his feet.

Anchoring Against the Double Team 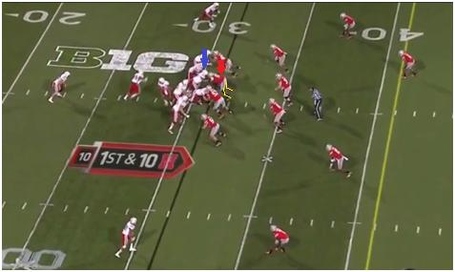 This play begins as a power play to the offensive left side. Hankins (highlighted with red arrow) lined up in front of the left guard. Off the snap he does a good job of staying under the guard'spad level while keeping his knees bent and a wide base. 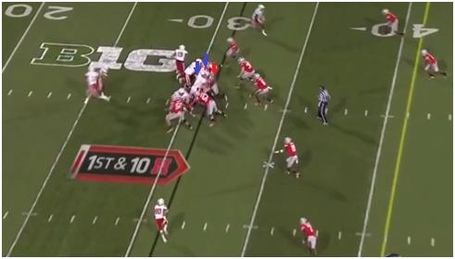 The left tackle sees that the guard is having trouble with Hankins and tries to help. Hankins still maintains a wide base and uses his balance to not be moved backwards. 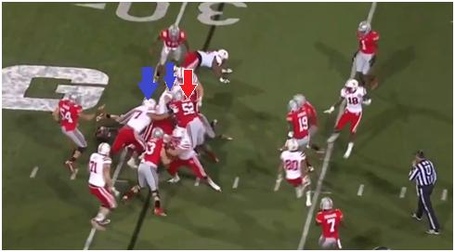 Hankins recognizes the play is going to the left. He disengages the guards and immediately drives the tackle back into the hole. With no hole the running back has nowhere to go and is tackled at the line of scrimmage.

The major critique in Johnathan Hankins game is that he lack the "explosive plays" and that his tackles for loss dropped in the 2012 season. When watching film I felt there were a few plausible explanations for this decline. The first reason is a philosophy change along the defensive line. In 2011 when Hankins put up 10 TFL Ohio State ran an aggressive front coaching its defensive line to shoot gaps. In 2012 Hankins rarely tried to shoot the gap he was coached to take up blockers instead.The second was an increase of film on Hankins. In 2011 Hankins saw very little doubleteams as he was a relatively unknown player. This changed in 2012 as team understood the impact he can make.

So what are legitimate flaws in Hankins game?

He has an inconsistent get off from the line at the snap. He can be the first out of his stance or the last. Hankins doesn't have the same explosion from last year. The most likely reason for this is that he looks about 10 pounds heavier than he did in 2011. Hankins' conditioning is a concern though it is pretty good for a man of his size. While I did not see him take a single running play off, as a pass rusher later in the game he was more than content with just taking up a blocker and did not attempt to disengage the blocker on numerous occasions. Hankins will also play higher when he is tired. Finally his weight issues are a major concern. Prior to 2011 he was around 350 pounds for the 2011 season he dropped down to 325 pounds. This season he looked to have gained some back and be around 335 pounds.

Formerly considered a top five pick for the 2013 draft, Hankins stock has fallen some. I believe at the combine it will continue to fall if for no other reason than that Sheldon Richardson will put up some amazing numbers. This is perfect for the Steelers who need a 3-4 NT. Hankins displays impressive power, good hand technique and can anchor against a double team. Lacking the explosiveness in his play, Hankins may not fit for a 4-3 defensive front but he has the making to be a very successful nose tackle in Pittsburgh's 3-4 front.