With a part-time practice squadder for the left and a sophomore seventh-rounder in the right, the Steelers will need to fill the empty shoes of their 2012 team MVP.

"A wedged-shaped stone, which is the final placement in a masonic architectural arch. It is the missing link in the engineered design which allows the system to support a substantial load, connecting all intersecting arcs at the apex."

Since being selected 30th overall in the 2005 NFL Draft, Heath Miller has been the keystone of the Pittsburgh Steelers offense.

Miller is like a rock. (Cue Bob Seger.) His durability in his eight year career has been impeccable. Of the 128 regular season games Pittsburgh has played during his tenure, he has missed only five.

He is the best football player in the league, hands down. Others may be faster, bigger or stronger; but none represent the overall model better than Miller. The tight end position requires its player to both block like a lineman, while running routes and catching passes like a receiver. Miller's hands are unquestionable, making him the perennial security blanket for Ben Roethlisberger. Miller is a better technical blocker than over half of the offensive linemen employed in the NFL. His build and strength fit the prototypical parameters of the perfect tight end, and his speed and athleticism make him a mismatch against most linebackers and safeties.

What separates Miller from every other player in the league, let alone his position, is his intelligence. Miller is the third, emergency quarterback on gamedays because of his understanding of the entire offense. When all else fails, Miller holds the whole thing together, no matter who the coordinator is or which offensive scheme is implemented.

Unfortunately, the structural integrity of the Steelers offense in 2013 will suffer from, what architects refer to as, bald arch.

Bald arch is a term used to describe a common ailment of ancient and medieval keystones. Vibrations cause minute, unnoticeable collisions amongst the makings of the supporting arch, slowly grinding away at the keystone which begins to crumble and crack, as if plagued by a million silent jackhammers. These vibrations are usually the result of unexpected changes in the arches environment, or unforeseen impacts against weaker extremity points.

Miller has shouldered the load under numerous coordinators. When Ken Whisenhunt left to become the head coach of the Arizona Cardinals and Bruce Arians became Pittsburgh's offensive coordinator, Roethlisberger often leaned on Miller as patchwork offensive lines and gameplans repeatedly forced Ben to run for his life - and then find a receiver. Miller was, and still is, often the target and recipient of the most important first-down and red zone passes, out hitting charging defenders at the point of impact. As Arians left for the Indianapolis Colts and Todd Haley replaced him, Miller became the kingpin of a majority of the playbook - either as the primary pass target or lead run blocker. Nobody makes more contact per game than Heath Miller.

The Steelers roster will absorb several blows from multiple directions, with the possible departures of Mike Wallace and Rashard Mendenhall. The salary cap may force the release of Willie Colon, and the non-re-signings of Max Starks, Ramon Foster and Doug Legursky - players who each started games in 2012 and other points in their respective careers. Their absence will resonate throughout the offensive unit as the team learns to adapt without the usual key components.

Miller tore ligaments in his knee during the Week 16 loss to the Cincinnati Bengals. Miller left the game after being caught in an awkward position while run blocking, though he absorbed a bone-splintering hit directly on the same knee earlier in the game from Reggie Nelson. Miller was placed on injured reserve prior to Week 17, granting Pittsburgh one more roster spot to reserve a prospect player for the following season. Unfortunately, Miller will not be healed by the time training camp opens in Latrobe.

It is still uncertain if Miller will be able to play at all. Return dates are impossible to predict until he is able to complete physical rehabilitation and return to practice. He could begin the season on the PUP list if the team physicians believe he can be ready by Week 6. If the feel it could take a bit longer, he could be placed on injured reserve designated for return, the same rule which allowed David DeCastro to return to the lineup after also tearing ligaments in his knee during a preseason game versus the Buffalo Bills. This would allow Miller to return somewhere between Weeks 8 and 11. If his body is still unprepared, he may never play a snap and be shut down for the remainder of the season.

Regardless of the date of Miller's return, the Steelers will have to cope without him. In 2012, Leonard Pope and David Paulson rounded out the positional depth chart. Pope, a seven-year veteran who played under Haley in Arizona and also with the Kansas City Chiefs, signed a one-year deal prior to 2012; and is about to become an unrestricted free agent. Pope's return is doubtful, although Pittsburgh may be unable to find a cheaper, suitable replacement. His accrued seasons would require a minimum base salary of $840k.

Paulson, a seventh round draft selection in 2012, earned the favor of head coach Mike Tomlin and a spot on the active roster. Now with Miller out, Paulson will most likely be the number one tight end when Pittsburgh opens the regular season.

Jamie McCoy was signed to the roster when Miller was placed on IR. He spent several weeks on the Steelers practice squad at different times the past two seasons. His cheap contract and familiarity with the team may earn him a spot as the third tight end - second if Pope is not re-signed. The last tight end currently scheduled to appear at camp is recently signed Zack Pianalto, who signed a futures/reserve deal last week.

Otherwise, the Steelers will have to look elsewhere. Pittsburgh may take another look at David Johnson, who was a regular starter with the Steelers until injuring his ACL in the 2012 preseason, ending his season. The emergence of fullback Will Johnson would allow David Johnson to focus on tight end. His blocking ability could allow him to surpass McCoy on the depth chart.

Miller, despite his importance, will find his contract on the bubble list with Colon, James Harrison, Troy Polamalu and Ryan Clark. Miller is in little danger of being released, but he could see an extension and/or a restructure. Because his eventual return is expected, Pittsburgh may not want to address the position in the draft, but there may not be many desirable, affordable candidates in free agency.

Here's where we stand at this point in our positional exploration of the Steelers salary cap situation, without adding any players like Pope or Johnson until further information about Miller's recovery is released. If he is a PUP possibility, the team could use an undrafted free agent to fill in for six weeks. 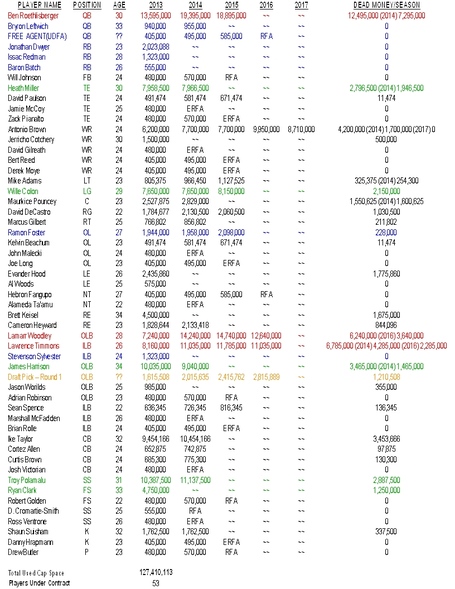 In our previous look at the safeties, readers were polled to decide which position Pittsburgh might select first in the upcoming draft. Right outside linebacker won by majority, and has been added to the list. To make room for the rookie, Chris Carter has been moved to the cut list and dead money penalties have been applied to the team cap figure above. If the team releases Harrison this offseason, Carter could retain his place on the 53-man roster.

We've placed one rookie contract, but now we need to place the second. ROLB has now been replaced with inside linebacker on the poll below. Select which position will be selected in the second round. Here are the remaining salary budgets which will need to be figured in to our roster budget.

Any mathematical manipulations of Miller's millions will have to wait until the remainder of the roster has been examined, and the total cap deficit has been determined. When we resume, we will address one position we are least likely to address in the draft, but need to address in the offseason - Cornerback.