If the Steelers want their top pass-defensive ranking to remain the same on the stat chart, they will need to find a way to keep the same names on the depth chart.

Few people remember the question marks circling the Pittsburgh Steelers secondary after the departures of Wille Gay and Bryant McFadden.

The team remained atop the statistical rankings and competed for championship trophies, but failed to pass the eye test of coaches, executives and fans alike. The Steelers entered 2012 with only two certainties. Ike Taylor would hold down his spot at the top of the depth chart at cornerback, and everyone else below him had little to no experience.

With absences at safety and linebacker inviting opposing offenses to attack through the air, the secondary got off to a rough start. Keenan Lewis, whose years of service in Pittsburgh made him the starter opposite of Taylor heading into training camp, played better than expected. At times he even played better than Taylor, who was called for multiple pass interference infractions and repeatedly beaten by double moves and physical receivers.

Eventually, the pre-season rust wore off, and the unit played exceptionally until Taylor broke his ankle against the Baltimore Ravens in Week 13. Injuries also nagged at Lewis and nickel back Cortez Allen, who was a takeaway creator in Taylor's absence. With their top three corners missing time, younger reserve and role players got a chance to see the field. Curtis Brown, Josh Victorian and DeMarcus Van Dyke showed moments of promise both on defense and on special teams; however, they failed to outshine those they were replacing.

Their evident inexperience will only bolster Pittsburgh's desire to re-sign Lewis in an effort to remain a championship contender. Lewis is set to become an unrestricted free agent following the Super Bowl.

Lewis has issued his obligatory desire to remain with the Steelers, but he has not shied away from his want for starter-equivalent pay. Early guesstimations have placed his value between $30- and $50 million dollars for five seasons. If Pittsburgh makes him an offer, it will most likely be towards the lower end of the spectrum because of their tight financial situation as it is already.

Contributing to the problem, is the contract currently retaining the services of Taylor, who is already 31 years of age with two season remaining on his deal. He is scheduled for base salaries of $6,000,500 in 2013, and $7,000,500 in 2014. If Lewis and his agent demand to high of a base salary in either of these seasons, the Steelers will be unable to afford both contracts. Allen is expected to eventually take Lewis' spot, when Lewis replaces Taylor as the top dog; but his cheap rookie contract allows Pittsburgh to enjoy a Lewis/Taylor tandem for at least one more season. Both Allen and Brown will see their rookie deals expire and become free agents in 2015.

Because the team will most likely wish to retain both Lewis and Taylor, Lewis could see a contract structured something like this:

The signing bonus would be charged equally across the life of the contract, adding $3 Million dollars to each season as dead money. The sum of base salary plus dead money equals total cap hit.

The team's wish to re-sign Lewis could force some re-work of Taylor's contract. Only having one season beyond 2013, restructure is unlikely unless an extension is included. Knowing Allen and Brown will be wanting pay raises when their contracts expire makes an extension for Taylor even less likely. Should the Steelers release or trade Taylor, they would suffer an accelerated penalty equal to the dead money remaining on his contract - $6,907,332 - but would save $2,546,834 against their cap situation as it stands. His large dead money designations are the largest hindrance against cap magic. If the team can make it through 2013 without touching his contract, a release in 2014 would only bring half the penalty, saving even more cap space.

For right now, we'll add Taylor to the bubble list with James Harrison, Willie Colon, Heath Miller, Troy Polamalu and Ryan Clark. Someone on this list will not play for Pittsburgh in 2013, and the list is not full yet.

The Steelers have already begun signing training camp participants, signing Isaiah Green to a futures/reserve contract. Justin King, a former Penn State product who was signed by the Steelers by the end of 2012, has already expressed on Twitter a gratitude for the opportunity granted by the Steelers to compete for a job in training camp, although no contract has been signed as of yet - we can expect him to. Another expected signing includes Van Dyke, whom the Steelers signed after being released by the Oakland Raiders at the beginning of the 2012 season. Van Dyke is an Exclusive Rights Free Agent, meaning he will be affordable. His amount will be similar to the one projected for Baron Batch. If the team spends for Lewis, they may not retain Van Dyke. Nothing has been made official in his case, so we will abstain from adding his name to the roster just yet.

Here's our situation with only three positional groups remaining to explore: 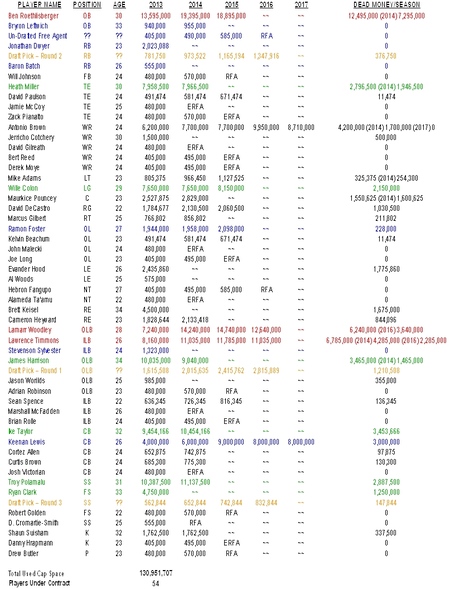 A reader's poll selected ROLB to be the first position selected in the upcoming NFL draft. To make room for the incoming player, we sent Chris Carter to the projected cut list. In the poll to decide our second round selection, we almost had a tie. RB edged out SS for the spot, but SS received more votes than any other position combining both polls. We will insert SS as our third selection. To make room for the new safety, recently signed Ross Ventrone was added to the cut list.

To make room for our new running back, I retracted my tender offer from Isaac Redman. Part of Pittsburgh's problem running the ball was a lack of carries and snaps for all of the backs on the roster. With Chris Rainey gone and Rashard Mendenhall leaving, the Steelers are unlikely to put themselves in the same position. If a running back is drafted in the first three rounds, it will be of the overall, potential-starter variety; leaving little room for Redman, regardless of his toughness and tenacity.

This leaves our roster at 54 men. Miller's absence early in 2013 will most likely provide a roster exemption. His salary will count against the cap, but his body will not affect the roster count. When he returns, the extra tight end will be the one released to make room.

With ROLB, RB and SS now off the list, we now need to find a home for our fourth round selection. Voice your opinion on the poll below. When we resume, we will explore the positional antithesis of the cornerbacks - the receivers.