With their prized thoroughbred prepared to bolt when the gates are opened, the Steelers will need their young stallions and ponies to carry playoff hopes through next season.

The young money crew is about to look more like scattered change.

Mike Wallace is about to become a free-agent, and the chances of Pittsburgh being able to afford a respectable contract are nil. He has been the most productive receiver from an overall statistical perspective for the Steelers during his time with them, and his speed is virtually unrivaled in the NFL. His refusal to sign his restricted free-agent tender and skipping of training camp prior to the 2012 season have been well publicized. While the reality is Pittsburgh cannot afford a contract of Wallace's alleged desires over the next five seasons with a salary cap in place, his holdout certainly did not help convince the front office to make necessary concessions to clear enough room to keep him around.

With Wallace surely gone, Antonio Brown will become the Steelers top receiver. Brown signed a multi-year deal with Pittsburgh during Wallace's abstinence, committing himself through the 2017 season. Unfortunately, the abundant depth perceived prior to 2012, has left little behind Brown for 2013 and beyond.

Emmanuel Sanders has shown splashes of starting material since arriving in Pittsburgh, but usually gave way to Wallace and Brown in the pecking order. Brown had produced 1,000 yards receiving and 1,000 return yards in 2011, while not being one of the team's top two receivers entering the season. This production inspired confidence in the front office to offer him a long term deal. Sanders has not put up those types of numbers, and will be auditioning for such a contract in 2013.

Sanders is a restricted free-agent. Selected in the third round of the 2010 NFL Draft, he will most likely be offered a second-level tender requiring a compensatory third-round 2013 pick, while paying him $1,323,000. If Sanders and Brown are able to keep the offense a contender, Sanders could receive a contract offer when he becomes an unrestricted free agent following the season. He could receive an offer this off-season, but both the team and Sanders' agent will want the extra season to establish a value range when negotiating a new, long-term deal.

Jerricho Cotchery will return, bringing his veteran experience and tenacity to the slot as the team's third receiver. Cotchery could become a cap casualty, though only as a last resort because his release only saves one million dollars against the cap. The team will need all the wisdom and leadership they can get this season.

After Cotchery, there are most likely two roster spots up for grabs. The Steelers have already signed three other receivers to futures/reserves contracts - Bert Reed, Derek Moye and most recently Khasif Moore, whose addition was announced on Monday afternoon. David Gilreath, who appeared in a few games for the Steelers this season, is also on the roster expecting to compete for a job in training camp.

Reed, Moore and Gilreath share similar builds and skill sets. While each could still be productive, the receiving corps is missing a large physical presence during short-yardage and red-zone situations. Plaxico Burress was signed late in 2012. Now a free-agent, the Steelers could consider bringing him back to camp; but their cap situation prevents them from adding too many extra dollars. A younger guy may be given a chance due to reduced wages. Moye could become a possible replacement. At 6-foot-5, he would be the tallest receiver, however height is not always everything. With an impressive camp, his height could give him an advantage over his competition when cuts are decided.

There are multiple options in free agency, but as is the case with Burress, Pittsburgh really doesn't have the cap room to make any offers. The team will be forced to be content with what they have, outside of signing some more undrafted prospects or drafting a receiver in the upcoming draft.

Reader's polls have selected in the first three rounds: ROLB, RB and SS. In our fourth round poll, the readers agreed the Steelers will address their receiving group in the fourth round. We've been keeping a running tally during our positional financial exploration of the Steelers roster. We've added the projected fourth-round selection and the RFA tender to Sanders. Here's where we stand to this point, with our new additions: 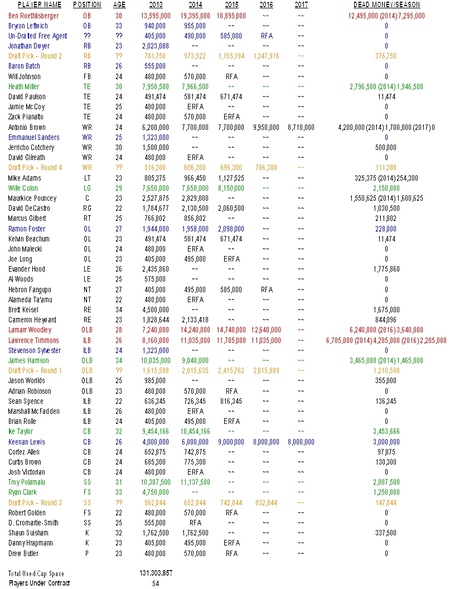 With the projected draft pick filling the fourth receiver spot, for now Gilreath will hold down the fifth spot having actual game experience with the offense. Keeping Gilreath, the draft-pick and Sanders, forces Reed, Moye and Moore to the projected cut list. It will be up to them to earn their way off. We're also adding the name of cornerback Justin King who has officially been added to the team's official website. His five years of service would have required a minimum offer of $715k. According to Rotoworld, King signed a one-year deal. We've determined there is little room for him in his positional group, but he will at least have the opportunity to win a job.

We have two more groups to cover before we know exactly how much money the front office will have to clear up. As it stands now, we're about $12 million dollars over the projected cap limit when including the current penalty total of almost $600k. We will resume our exploration with the defensive line, where we will find another player whose career exists on a bubble; then we will wrap up our roster tour with the special teams. Once our potential roster has been defined, we will begin playing around with cap options squeezing the Steelers best possible rosters under the NFL salary cap.

We've placed four draft picks so far, in the poll below make your choice for where we should place the fifth. Not every draft pick is guaranteed to make the roster, but depending on which positions are selected could decide which veterans the team will be comfortable walking away from.