Here's where the AFC North stands at the end of the regular season:

This week the AFC North confined itself to hurting each other. The Ravens and the Bengals played each other at M & T Bank Stadium, in a meaningless game in which the Ravens held out many of their starters. Winning the game could not get the Ravens a bye week, even if the Patriots lost. The Bengals had the final Wild Card sewn up, and were playing, I suppose, for momentum. The wisdom, or lack thereof, of the respective schemes will be endlessly debated in the coming months if they don't work. And honestly, who knows? If I was coaching the Bengals I probably would have done the same thing. The Bengals are pretty inexperienced in the post-season, and it is probably best to keep them in fighting trim. And although the starters played about half the game, many of them were pulled in the second half.

Ironically, running back BenJarvus Green-Ellis sustained a hamstring injury in the pre-game warmups and did not play. Green-Ellis was back at practice yesterday, however, so presumably he is good to go for Saturday's tilt at Houston.

The Browns traveled to Pittsburgh knowing they were going to be playing their third-string quarterback, rather like the Steelers had to do a month ago when they traveled to Cleveland. In both cases the third-string quarterback lost. Thad Lewis, said QB last Sunday, looked a good deal more impressive in doing it than his Pittsburgh counterpart did in November. But, like the Steelers in November, the Browns doomed themselves with three fumbles and a pick. It took the Steelers twice as many turnovers to lose...

Prior to the game there was impassioned discussion in Steeler Nation as to whether the coaches should play for draft position (in other words, lose,) and/or sit Ben Roethlisberger. But Roethlisberger was having none of either proposition, declaring before the game that one of his goals coming into the league was never to have a losing season. As his coach, I wouldn't have wanted him to end the season the way he did versus Cincinnati, and apparently Mike Tomlin felt the same way. While Ben wasn't fantastic, particularly early in the game, he was a great deal more like the quarterback Pittsburgh knows and (mostly) loves.

On to the stats. I'm not going to follow the Bengals and Ravens through the playoffs. What I am going to do in the coming weeks is analyse the season's data for each team and compare it to my pre-season projections for each unit. So stay tuned!

Although both Joe Flacco and Andy Dalton were replaced partway through Sunday's game, I chose to only use their passer ratings. Roethlisberger and Dalton were essentially tied for the year-end average NFL passer rating, at 89.7 and 89.6 respectively. (Of course, Roethlisberger's rating includes three and a half games worth of Charlie Batch and Byron Leftwich, which didn't improve matters.) If you look at the Pro Football Focus passer rating, Roethlisberger is head and shoulders above the other AFC quarterbacks, despite the poor games by Leftwich and Batch. But more of this in the retrospective post.

Again, I'll analyse this data more thoroughly in the Quarterbacks post, but Dalton and Roethlisberger are not only better overall (or at least were this year) but more consistent than either Brandon Weeden or Joe Flacco. (The two sub-65 rated games for Pittsburgh are Leftwich and Batch.)

Last week I decided to add the number of touchdowns thrown as well for each passer—it is the second number, and the third number is TDs to INT:

More about these figures next week... 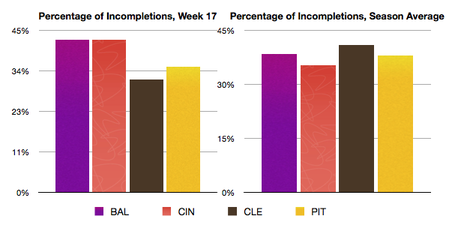 Considering how differently the teams began, it's interesting how similarly they ended up on average. 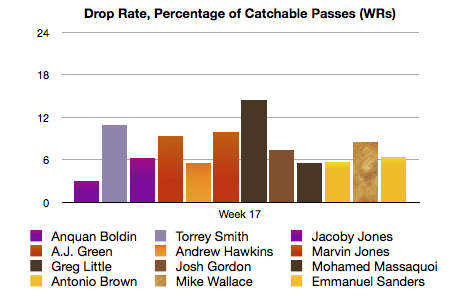 I suppose you could say this chart is relatively meaningless, since Mohamed Massaquoi, Anquan Boldin and Mike Wallace didn't play, Torrey Smith only played a short while, Josh Gordon was carted off the field, and so on. But this is where they ended up. 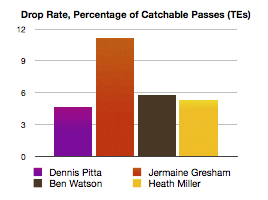 Similarly, Heath Miller didn't play on Sunday, and of the other three only Ben Watson had a significant number of targets.

Pittsburgh ended up last in average rushing yards this season. Perhaps not what Art II had in mind...

Every team except the Browns improved in defensive ranking the past three weeks. Interestingly, despite a slow start Pittsburgh has been the only team to consistently be in the top ten defenses this season. 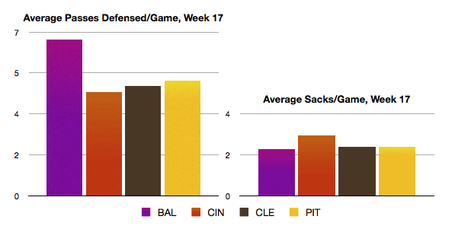 Baltimore has been without peer in the Passes Defensed category this season, even as they plummeted from the heady heights they began the season with. (As I noted in an earlier post, you can trace the loss of Lardarius Webb in Week 9 and Jimmy Smith shortly thereafter on the trending chart.) Pittsburgh ended up a distant second to Baltimore. Conversely, Cincinnati was the clear sack leader all season despite a similar fall-off through the season. Pittsburgh and Cleveland tied for second, with Baltimore close behind (but still last : ) 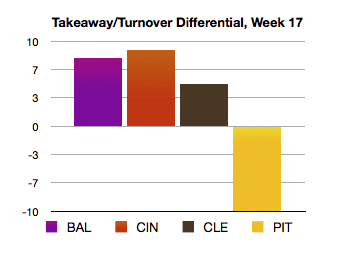 Pittsburgh still dominates in the Turnover category, as they have done since the Week 10 minus eight debacle at Cleveland.

Baltimore had the best Special Teams unit overall, with Cleveland close behind. Below is the ratio of yards gained (bright color) to given up (black:) 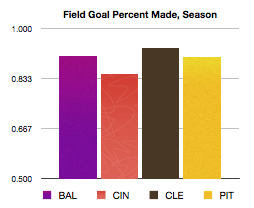 It's worth noting (and I should have done so sooner) that the Bengals' kicker was replaced in Week 15 when Mike Nugent went on IR. The replacement, Josh Brown, has been almost perfect, hitting 11 of 12 attempts. His sole miss was over 50 yards. As a result, the Bengals' average has been climbing towards respectability. All the other AFC North kickers ended up making more than 90% of their kicks, which is pretty remarkable.

It will be really interesting to see if there is any meaningful difference between the Ravens' +54 and the Bengal's +71. Or, for that matter, between the Bengals' No. 7 Defensive ranking and the Ravens' No. 15.