A changing of the guard is taking place amongst arguably the most crucial component of Pittsburgh's consistently dominant defense.

Dick LeBeau's three-men defensive fronts have been dictating offensive gameplans throughout his two tenures with the Pittsburgh Steelers. Time has begun dictating the passing of torches, issuing in a new generation - possibly the last to be coached by LeBeau in his Hall-of-Fame-worthy career.

Prior to 2012, the Steelers parted ways with Aaron Smith, their long-time starter at left end who had become unable to finish NFL seasons and retired from the game he played so well, for so long. Ziggy Hood, the team's first-round selection in the 2009 draft, was promoted to Smith's former spot.

Hood, a collegiate defensive tackle, was expected to convert to a new position in a new defensive scheme while trying to fill the void left by a franchise legend. His learning curve may be on a slow, creeping grade; but he has always improved from season to season and much is expected during the final season of his rookie contract. The team continues to act as if they believe Hood is the LE of the future, but 2013 will still be an audition for Hood as the quantity of his production will affect the quality of any future contract offers. The Steelers may attempt to offer him a contract extension this season, but Hood and his agent may wish to wait until he becomes a free agent. Hood has never talked about wanting to play other positions or for other teams, so for now we will expect his contract - and role with the team - to remain the same.

Backing up Hood on the left side is Al Woods, who is also in the final year of his contract. Woods has been solid in spot appearances. His only fear of being released before his contract expires naturally, involves the team drafting a defensive end. Although, once his contract expires, there is little reason to believe he will receive another offer.

On the opposite end, Brett Keisel reprised his starting role for the seventh consecutive season, since replacing departing starter Kimo Von Oelhoffen, who left for the New York Jets following the 2005 Championship season. Keisel's durability has rarely been questioned, missing only 14 of 112 possible regular season games since becoming the full-time starter at right end.

Unfortunately, Keisel and his infamous beard cannot play forever. A 34 year old player entering the final year of their contract would normally expect an impending end to their career. Few players outside of kickers, punters and passers receive contract offers after 35. Waiting to take Keisel's place, is 2011 first-round draft selection Cameron Heyward.

Heyward will see his rookie contract expire following the 2014 season, and is also expected to warrant a new contract by then. Until Keisel is gone and Heyward becomes the starter, the team will continue to consider itself fortunate to have relatively inexpensive, quality depth at the end positions.

Because of the difference in salaries between Heyward and Keisel, combined with the low ratio of dead money associated with Keisel's cap hit ($1.675 million compared to $4.5 million cap hit); Keisel's name has to be added to the bubble list of players whose contracts may see special attention this off-season. Keisel, like Ryan Clark who is also in the final year of his contract which has almost identical terms to Keisel's contract, is scheduled for a salary which severely underestimates the wealth of experience and leadership either player provides to the field and locker room; however, the impending free agency of Heyward may convince the team to test his ability to start over a two year span rather than make a crucial decision over a former first-round pick and starter after a one year sample size, while saving a few crucial cap dollars in the process ($2.825 million).

Moving inside to nose tackle, we find a 35 year old player whose contract has expired with little chance of any new offers. Casey Hampton, yet another former first-round selection, has been the pillar LeBeau has built his stellar Steeler defenses around. Unfortunately, all good things must come to an end. Hampton's career was very good.

Some continue to hold out hope the team may be able to re-sign him at a reduced salary, however with three intriguing options behind him on the depth chart who demand at least equal or less cap room than re-signing Hampton, the team may not choose to add to the amount of space they will have to clear for 2013.

With Hampton likely gone, Steve McLendon is expected to assume the starting position by default entering the off-season. McLendon has proven he has the ability to create penetration, but his performance against the run has left room for doubt over his long-term success as the starter. McLendon is a restricted free agent. Originally signing with the Steelers as an undrafted free agent, he will probably receive a base-level tender of $1,323,000 with no draft pick compensation.

If the team felt they were in danger of losing McLendon, they could escalate the level of his tender to require a compensatory pick; but a cheaper option would be to offer him a long-term deal with a cheap first year if thoughts of his departure were to create such anxiety. If McLendon is hoping to receive a Hampton-level contract offer and remain the full-time starter through the future, he and his agent would most likely prefer to play for the tender and audition for the best possible offer. Adversely, the team may wish to only offer him a tender and see if he is able to handle the role required of his position.

Behind McLendon resides Alameda Ta'amu, the fourth-round selection in 2012 who had an intoxicated run-in with authorities and still may see jail time as a result. Ta'amu's massive frame was projected to be the perfect sequel to Hampton, however he failed to shock-or-awe in his first NFL training camp. Ta'amu never saw a single snap in his rookie year. His legal issues earned him a two-week suspension, and eventual demotion to the team's practice squad. Should his personal problems not force him away from team operations, an impressive training camp and preseason could earn him the starting spot over default incumbent McLendon.

After Ta'amu, the team also has Hebron Fangupo, who was snatched up during the final week of the 2012 season. Fangupo was allegedly a target of the Steelers when entering the draft, and possesses the necessary traits to play the position. However, paper potential and on-field performance don't always equate. He will get as fair of a shot as everyone else to compete for a spot on the roster. Ta'amu's possible incarceration only benefits Fangupo's chances of at least making the roster.

For the sake of our tracker, we will only add McLendon's proposed RFA tender from the defensive line. The only other current addition is the result of our previous reader's poll which is projecting quarterback to be the fifth-round selection in the upcoming draft. The draft pick will assume the placeholder we had originally set for an undrafted third quarterback. This will inflate our projected reserve passer budget, although the team may elect to also sign an undrafted player rather than a veteran to fill out the depth chart, which would instead save Pittsburgh a few cap bucks. 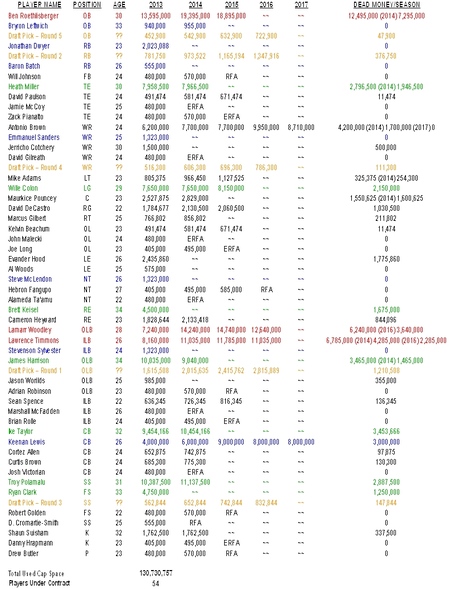 Because the installation of a draft pick at quarterback only assumed the place of another speculated contract, we had only one addition to the projected cut list to make room for a re-signed McLendon; however, this cut will not come from the defensive line. Instead, I am going to move my projected offer to Ramon Foster off the table. It is impossible to predict how much he will demand in free agency, or how much the market will demand his services. The budget allotted covered the re-signing of one of three impending veteran free-agents: Foster, Max Starks or Doug Legursky. Foster would provide the most value for the suggested price, especially if the team is dead set on starting Mike Adams and Marcus Gilbert at the tackle positions in 2013.

For now, we'll not re-sign Foster (or whoever) until we have a complete picture of the roster and know exactly how much cap space we can safely clear, and just how difficult extra space will be to come by:

The Super Bowl is quickly approaching, meaning the off-season is just around the corner. We will wrap up our positional exploration with the special teamers while tending to some final housekeeping regarding our cap situation before we begin exploring possible routes to the projected target range of $116 million dollars, when considering the expected tender offers and free agent re-signings the team is about to attempt to overcome.

The poll continues the placement of our draft pick budgets. Share your thoughts on where you expect the Steelers sixth-round selection will go.