Steelers 2012 Year in Review: the Curious Case of Benjamin’s Performance

What started off looking like it could be one of the better seasons of Roethlisberger’s career ended up being a disappointment with the Steelers failing to make the playoffs. With an 8-8 record, it could be imagined that the Steelers’ franchise QB had a bad year statistically.

Share All sharing options for: Steelers 2012 Year in Review: the Curious Case of Benjamin’s Performance

But numbers can be deceiving, and before engaging in unfounded speculation or assuming answers that may not be correct, maybe some dissection of Roethlisberger's statistical performance is in order.

The Steelers franchise quarterback Ben Roethlisberger finished the season as the seventh ranked quarterback in terms of passer rating.

Roethlisberger shared the top ten with the usual suspects such as Aaron Rogers of the Green Bay Packers, Peyton Manning of the Denver Broncos and Tom Brady of the New England Patriots who were ranked first, second and sixth respectively. Surprisingly, two rookies, Robert Griffin III of the Washington Redskins and Russell Wilson of the Seattle Seahawks, ranked third and fourth respectively, finishing ahead of the Steelers' QB, as did Matt Ryan of the Atlanta Falcons. Drew Brees of the New Orleans Saints, Matt Schaub of the Houston Texans and Tony Romo (eighth, ninth and tenth respectively) round out the top ten.

There are stats other than the NFL's Passer rating used to measure and compare a quarterback's performance, but to avoid arguments over any strengths or weaknesses in them, the NFL's Passer Rating as the most commonly used was chosen as the basis for this analysis.

The first and most obvious positive observation to be made is that Roethlisberger managed to rank as high as he did (seventh) despite missing three games (18.75 percent of the season), and apparently not being 100 percent physically and/or mentally upon his return for the final three games of the season. What's even more impressive is that Roethlisberger is ranked just behind Brayd (98.7) and ahead of Shaub (90.7), both of whom are in the playoffs.

The next aspect to consider is how well Roethlisberger did given his receiving corps' performance; obviously a quarterback needs receivers who can hang onto the ball with some regularity in order for his QB rating to benefit. 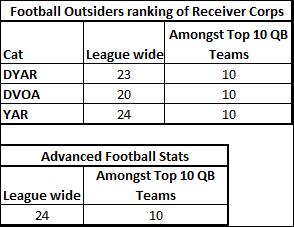 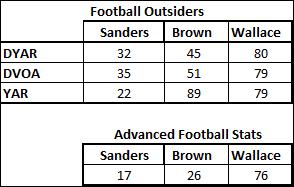 Simply put, Roethlisberger was a top ten passer despite throwing to a sub-par performing receiving corps.

This ranking would improve somewhat if tight ends were added to the mix, given the Pro-Bowl year the Steelers' Heath Miller was having, but not to a degree sufficient to change the overall standings or lessen the impact of the poor performance of Steelers wide receivers Mike Wallace, Emmanuel Sanders and Antonio Brown.

Roethlisberger's season long passer rating of 97 was achieved game by game as shown below; the dotted blue line represents his rating per game, the solid red line shows his rating on a cumulative basis.

On a quarterly basis Roethlisberger's season passing statistics can be broken down as shown in the table below:

From an effectiveness standpoint, the table above indicates that the third quarter was the most successful quarter for Roethlisberger throughout the season.

On a quarter by quarter basis, the table and graph below breaks down Roethlisberger's performance in a manner to account for most aspects and milestones of the season:

Despite his third quarter performance record, it is the second quarter that Roethlisberger threw the most (10 or 38 percent) of his 26 touchdowns, although his completion percentage is the lowest of the regular four quarters and is what made the most difference between his second and third quarter ratings.

Roethlisberger's touchdown and interception performance by quarter is illustrated below: 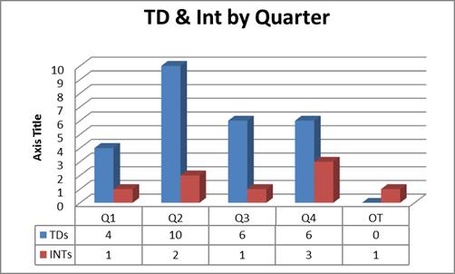 Much can be said, has been said, and undoubtedly will be said of Roethlisberger's performance after his return from injury starting in Week 14, in particular whether he was mentally or physically ready to play given some of the questionable decisions he made. However, from a performance standpoint it would be a mistake to pin the Steelers' 8-8 season solely on the arm of their franchise quarterback or Todd Haley's new offensive scheme; Roethlisberger's attitude towards his new OC may have had an influence, and certainly the continuing revolving door of offensive line configurations and the very erratic rushing attack hampered any continuity the Steelers offense tried to establish, but statistically Roethlisberger didn't have a bad season; he just made some crucial errors at key points in crucial games near the end.

The interceptions in the Chargers, Cowboys and last Bengals game certainly killed any chances for the Steelers to manage the much needed wins necessary to qualify for the playoffs, but equal blame for those games being so crucial can be shared with the Steelers' defense which allowed teams like the Oakland Raiders and Tennessee Titans to defeat the Steelers early in the season. Those losses, added to Roethlisberger's questionable condition upon his return and all the other injuries accumulated along the way were just too much for the team to overcome.