The James Harrison show will be playing center stage in the Steelers front office this off-season, as they cannot escape the inevitable decision which will have to be made regarding a former defensive player of the year.

Share All sharing options for: Steelers 2013 salary cap options by position - outside linebacker

The most ferocious, devastating hit James Harrison will make in 2013 will not come on a football field, but on the Pittsburgh Steelers payroll ledger instead.

The 2013 NFL league year has not even officially begun yet, but the Steelers find themselves already over the estimated salary cap of $121 million. The Steelers are expected to use several methods to clear cap space allowing them to sign a few of their impending free agents and upcoming draft selections.

We began our positional exploration with the quarterbacks, which also gave us a chance to go over some fundamentals. Here is what our picture looked like when we last left it: 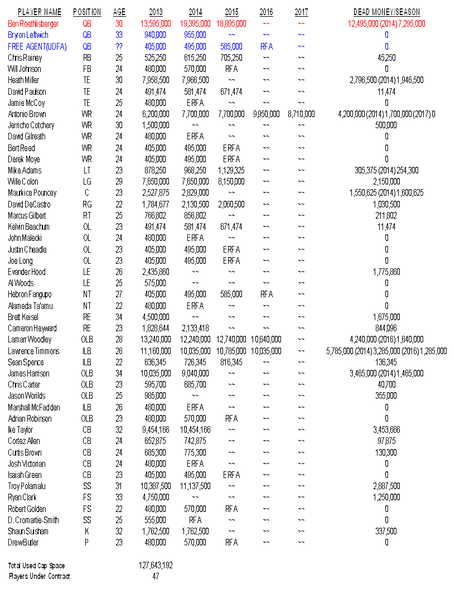 Even after restructuring the contract of Ben Roethlisberger, Pittsburgh found itself still roughly seven million dollars over the cap limit, with only 47 of a 53-man roster. We added two quarterbacks to the roster who have not been officially offered contracts by the organization in an attempt to project the possible actions of the Steelers front office. While the two players to actually fill those spots could be anyone, the cap hits listed should be close to the amount Pittsburgh will be willing to spend on backup quarterbacks in 2013. Should the Steelers spend less than projected, they will save even more cap space. Consider it an added bonus, but it will not be enough to fix all of the financial issues plaguing the roster.

Pittsburgh has paid its premier players a pretty penny as it attempted to keep their Super Bowl winning core together. Some of those contracts have become cumbersome as the players in question find their skills in question, as their age increases faster than some of their statistical categories. None are questioned more than the Steelers two starting outside linebackers.

The 2013 regular season was easily the most disappointing for they dynamic duo of LaMarr Woodley and James Harrison. Harrison missed all of training camp, preseason and several games of the regular season dealing with defiant knees. Even when he did return to the field, he still took several more games before he began to show glimpses of his usual form. Harrison played his best toward the end of the season, applying steady pocket pressure and playing a role in forcing multiple turnovers. However, for many, it was simply not enough.

In an off-season where Pittsburgh will seek to pinch every single penny they can, Harrison's cap hits cannot be ignored. The trouble with tough decisions is they have to be made, whether the right choice is known or not -- if there are any right answers at all. To make any decision, one must first weigh the possible options involved.

Harrison has two years remaining on his current contract, scheduled to become a free agent in 2015. He is set for cap hits of $10.035 million in 2013, and $9.04 million in 2014. Harrison is 34 years old and while he may claim to feel like a younger man, the fact is he is only getting older. Some have begun to doubt whether Harrison can continue to produce on the field at a level equal to his pay grade, or cap consequence.

Cap hits are made up of two parts: prorated bonus money and non-guaranteed base salaries. Harrison is set for base salaries of $6.57 million in 2013, and $7.575 million in 2014. The prorated bonus money fills in the difference with designations of $3.465 million against 2013, and $1.465 million against 2014. Pittsburgh has several ways they can go about clearing cap space through Harrison's contract.

The first option would be to retire/release him. Should the Steelers choose to terminate his contract, they could wipe his remaining base salaries from the ledger, but they would still be held accountable for all of his remaining bonus allocations, meaning Pittsburgh would suffer a cap penalty of $4.93 million dollars. Subtracting this penalty from his original hit would save $5.105 million dollars against 2013's salary cap, and all $9.04 million against 2014.

The second option would be to release him after June 1st. When teams release players after June 1st, they are allowed to split resulting "dead money" penalties between the current and the following season. Going this route, the Steelers would suffer a penalty of $2.465 million dollars against both 2013, and 2014. Pittsburgh would save $7.57 million against 2013's original cap hit, and $6.575 million against 2014.

The third option would be to release Harrison as described in option one, but re-sign him to a much smaller, non-guaranteed salary. As was the case with option one, his prorated bonus charges would be accelerated and held against the cap figure. It is difficult to assume exactly how much the team would be willing to offer in this scenario. If they offer him too much, they won't save any cap space at all. A veteran with his number of accrued seasons would warrant a minimum salary of $940,000 dollars. If this is the amount offered to Harrison for a single season deal, the Steelers would then only save $4.165 million against 2013, but still save all of 2014's hit. It would seem logical that Harrison would want slightly more than minimum, but Pittsburgh may not be able to afford to offer him more.

Trading or Restructuring are not viable options in Harrison's case. Trading him would still accelerate "dead money" penalties like releasing him, and not many teams are in the market for 35 year old linebackers with questionable health. Because he only has one season left beyond the current year, restructuring his deal would clear the least amount of cap space, while only creating a more painful predicament for 2014. The Steelers would only save about $2.8 million against 2013's cap, but add $2.8 million of guaranteed, unrestructurable dollars to 2014.

Woodley, on the other hand, has four years left on his contract making him a prime candidate for restructuring in 2013. He is scheduled for a base salary of nine million dollars in 2013. For projection's sake, let's say the Steelers move eight of his nine million in base salary, and convert it into a signing bonus. The eight million dollars is divided amongst all the years remaining on the contract including 2013, and added to each year's prorated bonus charges. This would save Pittsburgh six million dollars against 2013's cap hit, but add two million to each year after.

Woodley has too much "dead money" associated with his line in the ledger, meaning there is no way the Steelers trade or release him anytime soon. Ideally, the Steelers would love to get through 2013 without having to restructure any contract, but sometimes it is inescapable. The Steelers would definitely like to get through 2013 without touching Harrison's contract, as his "dead money" hit in 2014 is two million dollars less than 2013. Releasing Harrison in 2014 would be far less painful, especially if they released him after June 1st; unfortunately, the front office just can't wait that long.

The picture doesn't get much clearer beyond the top two names, either. Jason Worilds has earned his spot as first reserve at both outside linebacker spots, although he has played much better on the left behind Woodley. Worilds will play the final year of his contract in 2013, and the Steelers will be forced to make a decision in his regard following the season. Chris Carter was expected to be the heir to Harrison's position, but injuries and inexperience have prevented him from earning the job outright. He is only 23 years old and has two years remaining on his deal, however he could find himself expendable if the Steelers draft another outside linebacker, want to re-sign Worilds, and find a way to keep Harrison.

Even if the Steelers don't address the position in the draft, Carter will still have his hands full as he will continue to compete for his roster spot with youngsters Adrian Robinson, Marshall McFadden and Kion Wilson. The Steelers will be signing many more players as they prepare for the 2013 season, and several of those players are sure to be linebackers. The real trick is deciding which guys are up to the task, and are also affordable.

Here is an updated view of our situation, including the Woodley restructure discussed here and the new contracts of Kion Wilson and safety Ross Ventrone. We're not going to make any assumptions on Harrison's behalf for now, but we will make him the first name on "the bubble list". 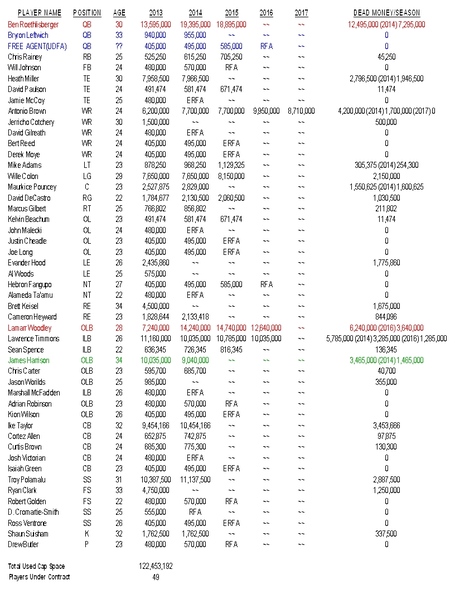 With just our second restructure, we're within $1.5 million dollars of the team salary cap limit. Next time, we will stay on the defensive side of the ball and explore the inside linebackers where we will find the next most-likely candidate for a contract restructure.