Should Ben be Ben?

Share All sharing options for: Should Ben be Ben?

Earlier this week Ryan Clark, never a man to keep his thoughts to himself, stirred up a little mini-controversy in Steeler Nation when he said on ESPN

You to have to protect Ben against Ben. Right now, we have to tone Ben down in a sense and say, ‘Hey, right now, we're not a good enough football team for you to try to extend plays, for us to take sacks, for us to have turnovers.'

Clark backpedaled when asked about this by Alan Robinson of the Tribune-Review:

But in that as well, he needs to understand that, as constructed right now, we aren't playing well enough as a team to where we can take sacks and have turnovers. That's a team solution, but the quarterback has to spearhead it.

Ben Roethlisberger, in a fit of tact, said

It is what it is. I'm just going to play the game the way that I play it and try not to turn it over.

What makes this particularly interesting were the remarks made by Bill Polian, also reported by Alan Robinson in last Sunday's paper. He characterized Roethlisberger's performance in the loss to the Vikings the previous Thursday as "phenomenal."  Polian continued:

Ben Roethlisberger put on the greatest single individual display, south of Peyton Manning and Tom Brady and Drew Brees, that I have seen in a long time—maybe in my entire career... He avoided or shrugged off at least four sacks. He made plays down the field that were unbelievable, and he was under duress all night from snap 1...Ben's performance was absolutely unbelievable. And the fact they were one play away from tying the game tells you a heck of a lot about his competitiveness and toughness and his ability to make plays.

But he's not lasting the season if they don't shore up that left tackle spot. It's that simple.

I like Polian's solution better than Clark's. Rather than trying to turn Ben into a pocket passer, something Todd Haley has apparently tried and failed to do, perhaps the best answer is to change the conditions under which Ben plays so that he isn't forced to improvise so often.

Does he occasionally miss a possible dump-off pass or quick strike in favor of trying to make something else happen? Well, yes. But I would be willing to bet for every time he ignored an open receiver in the slot, he was under pursuit by a crazed defensive lineman, with everyone covered downfield, at least twice.

We're all devoutly hoping Kelvin Beachum and/or Levi Brown will prove to be an upgrade at left tackle. Mike Adams was identified by Polian as the problem. (His exact words were "he couldn't block anybody—he was beaten from word 1 virtually all night...")

So perhaps the question will be answered on Sunday. Will Ben, with better protection, be willing to get the ball out quickly and stop putting himself at so much risk by running around in the backfield? This is, of course, assuming that some combination of Beachum/Brown can provide better pass protection.

Levi Brown's run blocking has consistently been superior to his pass protection during his career. I was curious as to how it compares to Mike Adams and Kelvin Beachum, the other two candidates for the LT position. As usual I headed to Pro Football Focus, because whether one agrees with their assessment in every individual case, it's at least a neutral place to look.

The first interesting thing I discovered was, according to PFF, Beachum has not played left tackle this season. When he was subbed in for Game 3, it was only for Marcus Gilbert. In Game 1 he played center for all but a couple of snaps. So I don't have much with which to compare Beachum to the others.

But we might as well compare the other three anyhow. Here's what I found:

PFF assigns each performance a number, with the area between 0.9 to -0.9 representing an "average" player at the position. Let's look first at run blocking.

As we can see, Adams was within the "average" range, with Week 4 vs. the Vikings being his best run blocking performance, although it still didn't rise to the level of above average.  Gilbert and Brown each had a couple of average games and a couple that were a bit better than average.

Pass blocking is another story altogether. Of the three players, only Marcus Gilbert had a game with above-average pass blocking, and Game 1 was pretty bad.  Mike Adams posted by far his best score in Week 1, being just above average, and then dropped precipitously. As you can see, he was worst than a -5 in Week 4 (the actual number was -5.2.) Levi Brown began on a bad note but overall the numbers, while definitely below the line, are better than Adams. (Note that in Week 2 Adams was also below -5.0 overall—the actual number was -5.1.)

Here is the overall ranking for the same time period: 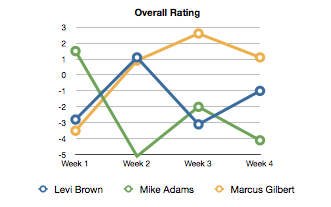 In the few numbers we do have for Beachum (mostly at center) he was, curiously, better at pass-blocking than run blocking. (Both were in the average range.) I wonder if we won't see him and Brown subbing out for a while with an emphasis on run plays for Brown and pass plays for Beachum, at least until one or the other of them shows enough to win the job outright (or until Adams is ready to reassume it.)

What does all of this tell us? That, frankly, it's a really good thing Ben Roethlisberger is so good at improvising. Yes, I hope he can be persuaded to throw the ball away instead of taking a sack from time to time, or taking the available quick out when it is taking too long for a downfield play to develop, but whatever Ryan Clark thinks about it, the Steelers' only hope for winning games in the next few weeks is for the defense to improve and maybe even actually take away the ball from time to time, while the offense improvises as needed to produce enough points to win. Ben's probably going to be pretty sore after the next few games, but frankly that's what this team appears to be at the moment. And of course if Le'Veon Bell can live up to the promise of last game, that will help a great deal as well.

In the meantime, maybe the costume department (or whatever they call the uniform guys) should get the Kevlar vest out for Ben again, and maybe put the steel plates back in his shoes. Just in case...