On Tuesday, Ben Roethlisberger expessed his concern about fans cheering after Matt Schaub sustained an injury. He's clearly right, but it seems some fans have trouble remembering that football is just a game.

Texans fans were cosmically punished for cheering Matt Schaub's recent injury in the form of a stern ass-paddling at the hands of the St. Louis Rams. Backup QB T.J. Yates threw 2 picks and posted a 45.3 quarterback rating in relief, perhaps in an on field rendition of the resounding "Eff You" Texans fans were issued from pretty much every player that was asked their opinion on the matter. Even the guy that sacked Schaub was in on it:

If you were at Reliant stadium and cheered Matt's injury, you are a poor representation of your fan base and a bad example to young fans.

Roethlisberger expressed his feelings on his radio show yesterday:

"It's truly, truly unfortunate...Booing when somebody gets hurt, it was just sickening. It's just so hard to understand, especially your home crowd."

Of course, most Texans fans probably didn't cheer, or at least regret cheering after spending some time outside of the groupthink fervor of the moment. But still, considering the current state of the NFL, rooting for injuries is beyond antisocial. For once, it's a good thing players have social media to express their opinions about something that happened during a game. Hopefully, their messages will reach a few of the people that couldn't distinguish entertainment from entity. These players are out there (in part) for your entertainment. 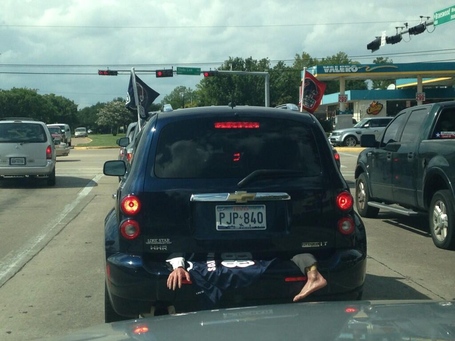 The HHR trunk effigy is probably more tongue-in-cheek than a legitimate hankering for a seemingly melted and otherwise petrified quarterback hanging out of the back of their obnoxious little car, or whatever you call those things. But a lot of the fans in Houston are just the latest surly flicker in the spectator arm of the Schadenfreude constellation.

It sucks when a player for your team sucks. And sometimes those sucky players suck for an inexplicably long crappy, sucky time. Just ask Jets fans any question including the words "Mark" and/or "Sanchez". But that doesn't mean they should hope he contracts Hepatitis or something from a sexually numb bar skank on a post-benching wallow-bender that ends at a dirty Brooklyn Waffle House. Or pulls a hamstring or whatever.

Here's to the hope that the marquee reprimand will aid Houston fans -- and all sports fans -- in remembering that these are just games, that the lives the players lead are far more important than their performance on the field.