The Steelers season is still alive, thanks to a gutsy win over Baltimore. Pittsburgh will have to beat the Raiders -- and avoid The Black Hole -- to keep it that way.

Share All sharing options for: Raiders vs. Steelers: Escaping the event horizon

Oakland is all that stands in Pittsburgh's way of a surprising three game win-streak that would seem to signify what some people refer to as a "pattern." That would be nice since we've seen the other side of such phenomena.

And it's not pretty.

The Raiders have lost to Kansas City, Indianapolis, Denver and Washington. That's a pretty elite group -- except for Washington, but it still seems like any team could end up losing to RGIII if they catch him on the right day. Other than that loss, their beatings have come at the very capable hands of some of the league's best, so their record is more of a soft 2-4 than a convincing reflection of their play so far.

The Steelers looked absolutely invigorated against Baltimore, thanks to a great performance by the defense and an innovative game plan that featured one of the team's best young players in Le'Veon Bell. This still might end up being a bad season for the Steelers, but at the very least they can say they took a game from their rivals. A win in Oakland could put the Steelers back in the middle of the AFC North after spending the entire season sweeping the basement.

It's the shaggin' wagon

Just when I thought Todd Haley couldn't get any dumber...he went out and totally redeemed himself. Well, not totally. I just wanted to use the clip since the sequel is coming out soon. Must've watched that movie fifty times when I was a kid.

Anyway, Haley really did turn things around for the offense. He drew up wrinkles to use on one the league's best rush defenses, and it worked. As Michael Bean mentioned, Roethlisberger has attempted significantly fewer passes in the team's wins. That correlation makes a lot of sense. They were playing teams that employs a similar style to their own, which might have lent itself to the decrescendo in the passing game, the defense has stepped up in a huge way, and -- obviously -- they had success running the ball against Baltimore.

You have to give Haley credit for that -- which is a rare, but happy occasion. So, I'm probably going to celebrate by going to see what will probably be a bad movie, because it's fun to remember how the first one made me laugh.

A Battle of The Walking Dead 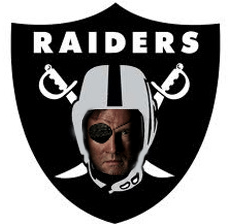 Well, sort of. Both teams' playoff chances are at least on life support, but not quite out of it entirely yet. Un-dead, I suppose you could call it.

The Steelers have actually lucked out in that their division rivals haven't played that well. Cincinnati's 5-2 will be hard for the Steelers to catch, and remember, the Bengals are one up on Pitt because Week Two. But a comeback isn't impossible.

The Raiders on the other hand, have the gruesome misfortune of being in a division that houses two of the best teams in football. They have little to no chance to catch either, meaning their only shot is at the remaining Wild Card, but they could actually pull it off, since the AFC (the entire NFL in fact) is pretty weak after the top few teams.

So Ben isn't big on the Wildcat. But it worked, so we'll probably be seeing it again. But the concern with Ben out wide isn't the same as it for some quarterbacks.

It doesn't seem likely that we'll see Porter -- or any other corner on the Oakland roster -- try to psych out the 6'5" 240-pound Roethlisberger. If defensive tackles and rush linebackers can't take him down, why would corner try it when Ben does even have a role in the play? You never know, but Ben will probably be ready for it if it comes.

More: Wildcat may not last, but the idea is important

Last week was awesome. But it might not have been had John Harbaugh not made a few critical mistakes -- namely the onside kick after the Ravens tied the game. The play itself worked out horribly, but even if it had gone well, what kind of message does that send to the defense? Yes, these guys are all grown men, but gambling with the game on the line like that was reckless to say the least. The defense probably didn't like it, and it's probably safe to say kicker Jutin Tucker didn't enjoy his introduction to Stevenson Sylvester either.

I have to be honest. At the beginning of the season, I didn't think it would matter who the Steelers used at running back. The line was struggling so comprehensively that I didn't think Bell could significantly improve anything behind them.

I was wrong. I make mistakes all the time -- and often times readers are kind enough to point them out to me. BELL IS AWESOME. And while I haven't completely abandoned my opinion on the somewhat layered fungibility of RBs, I can't deny that Le'Veon Bell looked like he had something special last week. He might not end up being an all-timer or anything, but he has some really exciting facets to his game, and his presence -- along with improved game planning and offensive line play -- has seriously bumped up the curve in Pittsburgh. Just ask Isaac Redman.

The Raiders are dead-last in passing. If the Steelers can get out in front in the first half, they might be able to force Oakland into featuring one of their major weaknesses. If the Raiders can keep the game close though, it could be a long and closely contested face off. The Steelers faired well against the Ravens in their field-postion-time-of-possession-grind-it-out-style game last week, but that wasn't the case earlier in the season.

Hey Tomlin, can Manny do a somersault if he scores two 55-yards TDs in the first half?

While we're not actively rooting for a human being to experience any more pain than they do on a day-to-day basis considering their shared experience of utter ephemerality in the midst of a swirlingly infinite universe, dude gets hurt a lot. And as the Steelers defense showed last week, they're not messing around -- at least not anymore. How a team goes from getting smoked by Matt Cassel and the Vikings to beating the defending champions in an incredibly well-played game in just a few weeks is beyond me. But they have, and now they're tied for first in the AFC North divisional standings (all four teams are 1-1). Of course, they'll need to have a better overall record to get any use out that fact.

That's where teams like the Oakland Raiders come in. They have one of the league's best rushing attacks. But Terrelle Pryor actually leads the team in rushing yards. Darren McFadden, on the other hand, has not been very effective -- except against the Jaguars, but does that even count?

Um, Raiders fans? Did you know that by using the term "Black Hole" to describe yourselves, you're actually comparing your fan section to spacetime phenomena that swallows everything that crosses its event horizon at the fastest velocity possible within it? Basically what this means is: When a hypothetical Oakland Raiders fan enters The Black Hole, he or she would "fall" toward the center of The Black Hole at the speed of light -- assuming he or she didn't immediately disintegrate from the unfathomable force. Said Raider fan would then become unable to recognize the passage of time, due to the fact that he/she would be traveling at the same speed as every single atom around him/her. It's uncertain what actually happens to matter that enters a black hole, but some physicists propose that it is instantaneously crushed into a singularity of matter and the black hole continues to become infinitely denser.

I'm not saying "stuck in a time loop" and "infinitely dense" are good ways to describe Raider fans, they are.

If the Steelers can make the Raiders attempt to move the ball through the air, they'll likely add a few more turnovers to their credit. On the other hand, if Pittsburgh struggles to stop the run, this could be a hard-fought game. The Raiders are a better running team than Baltimore, but the Steelers showed some of that vintage gap-stuffing that has made them one the toughest teams to run on in the NFL over the last decade or two. So, hopefully they can amp it up a bit and turn in another solid performance.

I think the Steelers new wrinkles on offense, and the speed they are capable of putting on the field on defense will get them to their third win in a row.