Within minutes of the announced trade with the Arizona Cardinals for OL Levi Brown, Steeler Nation launched scathing comments towards its once beloved General Manager Kevin Colbert. Where is the trust now?

In a move that legitimately raises questions, Colbert has traded a Day Three 2014 draft pick for seven year veteran Levi Brown of the Cardinals. Brown, who missed all of the 2012 season due to injury, was the fifth selection of the 2007 draft, and initially played right tackle his first three years for the Cardinals, but has been at left tackle since 2010.

The rationale for questioning Colbert's move comes from the following: initial reports were that the Cardinals were prepared to cut Brown, and by signing Brown the Steelers would need to create almost $ 2 million in cap space to make room for its acquisition.

As Neal Coolong reports however, the Cardinals re-negotiated Brown's contract down to the league minimum just before the trade.

The point is, where's the trust that was so readily given just a few months ago? Where are the Colbert defenders now? As one who has frequently questioned what Colbert has done in the past, and been highly critical of many of those things, I for one am willing to let this play out.

What is so amazing is that Colbert is now receiving such vitriol for the very cap management issues that were being praised prior to the start of the season as the reason why the Steelers had been to three Super Bowls and winning two in seven years. "It was worth it..." and "In Colbert we trust..." were common retorts to any criticism of Colbert's strategy.

Already Colbert is being tarred and feathered by many in Steeler Nation for this move, which is being seen by many as a desperate attempt to keep his job in light of the Steelers 0-4 record. Blame for the Steelers worst start since 1968 has been freely cast upon Colbert for his cap management practices which prevented the Steelers from pursuing or retaining quality free agents and subsequently for the Steelers' actual execution (pun intended) on the field.

Now Colbert is trying to address the immediate issues of high draft picks not performing, and the Steelers' lack of depth, perceived lack of talent and actual lack of success in 2013, and he's catching holy hell for it.

Of course, once they are disabused for their cap management hypocrisy, such disgruntled members of Steeler Nation will turn to Colbert's recent draft history as reason to pillory the man who stocked the shelves of Steelers' history with such players as Troy Polamalu, Ryan Clark, Ben Roethlisberger, Casey Hampton, Heath Miller, Clark Haggans, Brett Keisel, Santonio Holmes, LaMarr Woodley and other players who filled the roster of the teams Colbert built that won Super Bowls XL and XLIII and made it to XLV.

They will, rightfully so, point to the 2008 and 2009 draft classes as being total busts; they will point to the benching of Mike Adams and the lack of performance of Marcus Gilbert, and the reliance on a player like Guy Whimper as a backup as a reason for Colbert to be the sacrificial lamb for the current woes the Steelers are suffering.

Granted Brown comes with a rather poor rating as a left tackle, but he seems to have garnered higher praise for his past work at right tackle, the position he was drafted for and played his first three years in the League. What will be most interesting is whether Brown is utilized in such a way as to play to his strength, or will the coaches insist on putting a swinging gate where a brick wall is needed and play him at left tackle.

Gilbert says he thinks he's staying on the right 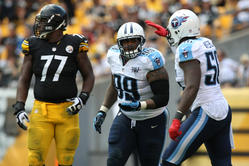 Criticism of coaches for a blown play is rightfully rebutted by the logical argument that it wasn't the coach who blew the execution, it was the player. How many times in recent years has Steeler Nation questioned why a certain player was being utilized in a scheme for which his natural abilities or his experience were not best suited? Ziggy Hood and Steve McLendon come to mind quickly. How many times was it observed that former offensive coordinator Bruce Arians refused to change his scheme or game plan to fit the uninjured players left to take the field? The Steelers were moving the ball on the ground in Super Bowl XLV behind Willie Colon, but did Arians stay with what was working? No, he kept going to the pass, allowing the Packers to tee off on Roethlisberger and take advantage of an offensive line that couldn't perform as well in pass protection as it could execute running plays.

Maybe Brown will play right tackle, and Kelvin Beachum will still be supplanting Mike Adams as starting left tackle, at least until Adams and the coaches figure out why he is having so much trouble. Or maybe Marcus Gilbert will be put back at left tackle, the position he was drafted to play, and the SWK (Swiss Army Knife) Beachum will return to his multi-faceted backup role where he seems to have the most value and provides depth.

But if Brown is inserted into the offensive line at left tackle, a position Cardinals fans cringed to see him fill, and the HOV lanes leading to Roethlisberger are once again filled to capacity, how is that Colbert's fault?

There is a price to be paid in following any strategy; the Steelers made a collective decision to retain its Super Bowl corps as long as possible. Such a decision comes with a price, and that price is being paid now. There are aspects of the scouting and talent evaluation that falls under Colbert as the GM that has resulted in the Steelers having nobody on the roster from the 2008 class, and only two from the 2009 class, but the GM's department has also found and drafted Maurkice Pouncey, David DeCastro, Mike Wallace, Kraig Urbik, Antonio Brown, Cortez Allen, Keenan Lewis, Ryan Mundy and others who are proving their worth in one degree or another. Sure some of them have left for other teams, but that happens every year, with every team, regardless of the cap situation.

Former Steelers head coach Bill Cowher had two losing seasons just two years after reaching the Super Bowl in 1995 and a 6-10 season in 2003, with Colbert as his GM. Tomlin has yet to have a losing season. Highly successful teams have down years from time to time, and they can be beneficial in improving the team's position in the annual draft which can infuse the team with talent to which it otherwise wouldn't have access.

A GM with the reputation Colbert has earned over his career must be smart enough to know he can't operate in a vacuum; the GM must work hand in hand with the head coach to ensure that the coach is given players who can accomplish what the coach plans to do. If you accept this logic where the Steelers are concerned, then you have to be prepared to spread the blame Steeler Nation is heaping upon Colbert to the coaches as well for the failed or failing draft picks.