With the Steelers currently sitting in last place in the AFC North with a 3-6 record in what is now considered a passing league, some in Steeler Nation have accused team President Art Rooney II of “meddling” in his own team because in 2010 he spoke out about improving the way the Steelers ran the ball. What has the alleged meddling gotten the Steelers?

It's been three years and 10 months since that day in 2010 when Steelers President Art Rooney II publicly stated that he and head coach Mike Tomlin agreed the Steelers need to run the ball more effectively. Three years of Rashard Mendenhall, Chris Rainey, Isaac Redman, Jonathan Dwyer and now, Le'Veon Bell. LaRod Stephens-Howling gets a nod, too.

If ever there was a season that the Steelers could use a running game, this is it; Ben Roethlisberger is having one of his worst years in recent memory. At his current pace he is on track to finish the year with 4,050 yards, 21 TDs, 16 INTs and a passer rating of 87.6, the third lowest in his career behind 2008 and 2006 (80.1 and 75.4 respectively)

What must make this season so frustrating for the Steelers (and Steeler Nation) is the fact that opposing quarterbacks for the most part aren't doing much better against the Steelers pass defense. In fact, as the table below shows, opposing QBs overall are faring slightly worse. 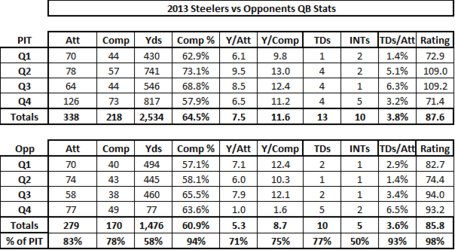 Of course, throwing twice the number of interceptions as your opponent certainly isn't helping the team, and ironically, the much ballyhooed "bounce back win" against the Buffalo Bills last week actually saw Roethlisberger's cumulative passer rating drop from 88.5 to its current 87.6.

These stats highlight what Rooney was trying to say way back in 2010; if the Steelers had been able to run more effectively this season, then the record would most likely be substantially different.

I wrote a column last week that Brett Keisel was right that the Steelers were unprepared to start their games. The empirical data clearly showed that their level of performance in the first quarter over the course of the season has been substantially less than the following three quarters, and I find it hard to imagine the players suddenly got more talented in the those final three quarters.

Be that as it may, what I'm presenting here is the first of three components of my assertion that Mr. Rooney was not only not "meddling" by advocating for a more efficient running game in what is being hailed as the "Passing Era" in professional football, but he was in fact correct in his assertion that to be successful, the Steelers must be able to run effectively.

This first table is presented to show on average the Steelers have possessed the ball for slightly more than half the game; their margin of possession is a +1:54. Despite the two beat down games (40-24 to Chicago and 55-31 to New England), the Steelers are only averaging 4.3 points a game less than their opponents. 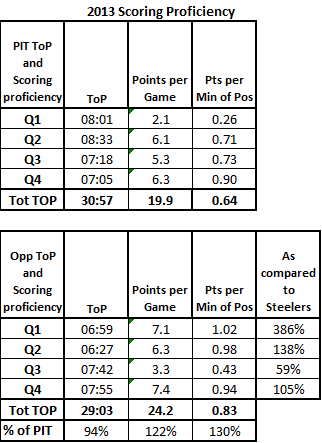 If you go back to the first table, you will see that you can't blame the horrendous scoring disparity in the first and second quarters solely on Roethlisberger's unfortunate turnovers; on average opposing quarterbacks have only scored three touchdowns in the first half versus five for the Steelers. Overall, the opposing QBs have thrown for nearly 25 percent fewer touchdowns as Roethlisberger through nine games, and have done so at a slightly less percentage of attempts.

Yes, there are a couple of pick sixes or fumbles recovered and scored mixed in the Scoring Proficiency Table, but that isn't the material difference in what the Steelers' record is and what it could be, had Rooney's expressed desire been addressed effectively.

Unless you're Terrell Pryor of the Oakland Raiders or Adrian Peterson of the Minnesota Vikings (okay, and maybe Matt Forte of the Chicago Bears), historically you aren't likely to break off a long run against the Steelers. Unfortunately, that doesn't mean teams can't now run against the Steelers defense. Just as you first have to walk before you can run, in football you have to be able to get first downs, and convert third and fourth downs into firsts to move your way down into the field and into the end zone. The following table summarizes the conversion proficiency of the Steelers and their opponents after nine games this year. 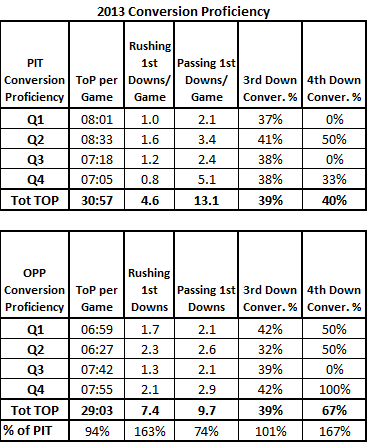 As you can see, the Steelers have been far more successful than their opponents, on average, in gaining first downs by passing, and the third down conversions are virtually tied. The fourth down conversion ratio is a byproduct of the larger issue we're exploring, and that can be found in the comparison of Rushing first downs.

The Steelers are averaging one rushing first down in the first quarter.

Yes the pace at which teams are able to run on the Steelers defense is a huge concern, but the fact that while the Steelers defensive scheme for years has been "bend but don't break" in terms of defending the pass and teams have taken advantage of that with short passes (can you say Manning, Brady, Dalton, Manning) to move up and down the field, this year teams are relying on their ability to run the ball to defeat the Steelers.

The following table spells out why it is so important for the Steelers to learn to run more effectively, even if it does come three years after their owner said they needed to focus on it: 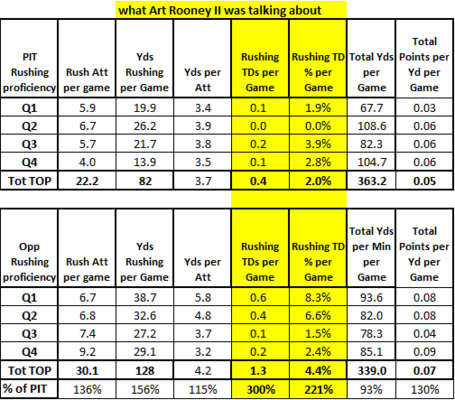 The Steelers have slowly increased their rushing yards per attempt to 3.7; their opponents are averaging 4.2 - not a huge disparity in and of itself. But look at the disparity between touchdowns and touchdowns per attempts. It's enormous the disadvantage the Steelers offense faces if they can't come close to matching the rate of touchdowns the defense is giving up.

In the three wins the Steelers have this season, they have not given up a rushing touchdown. In two of the games in which they have been the most soundly beaten, Chicago and New England, they faced quarterbacks known for their passing, yet the Patriots ran for three touchdowns and the Bears for two.

Everyone in Steeler Nation has been harping on Roethlisberger's turnovers, how the offensive line doesn't give him enough time to throw, yadda yadda yadda; or the cornerbacks play too far back or they don't force enough turnovers or the game has passed LeBeau by, blah, blah, blah, or Art Rooney has ruined this team because he want to run the ball more when it's a passing league. NO HE DOESN'T.

"We need to figure out how to get better running the football."

The Rooneys are a patient family, known for understanding the difficulties in building and maintaining a championship caliber team. But after three years of waiting for his words to be heeded, culminating in a (so far) losing season where his team's effectiveness in scoring touchdowns by running the ball is being surpassed by over 200 percent by the opponents, it is not difficult to imagine the president of the team is beginning to wonder how much longer he's going to have to wait.