Take a dinner roll, put some turkey and stuffing and mashed potatoes in it, smother that with gravy, and settle in for a good, old-fashioned Thanksgiving day bloodbath.

Share All sharing options for: Steelers vs. Ravens Week 13 Preview

One of the best days of the year is going to be twice as awesome this year -- if the Steelers beat the Ravens Thursday night.

The Ravens struggled to get the ball in the end zone against franchise icon Ed Reed and the Jets, but that didn't stop them from winning the game handily. Geno Smith finished the game with a 22.3 quarterback rating and the Ravens held the Jets to just 4.9 yards per pass. Joe Flacco's stat line was aided immensely by a 66-yard bomb to modern dance-enthusiast Jacoby Jones and another 60-yarder to Torrey Smith, but the passing game was effective enough to lead the team. Ray Rice and Bernard Pierce were stuffed by New York, gaining a combined 60 yards on 27 carries. The Ravens are 4-1 at home and 1-5 on the road.

The Steelers can give themselves what would amount to a two-game lead over the Ravens with a win on Thursday. Pittsburgh would be 6-6 and Baltimore would 5-7, but holding the tie-breaker would give Pittsburgh the edge if the two teams finish with the same record.Getting back to .500 for the first time since the offseason would be huge for a Steelers team that looks to have hit their stride after an embarrassing 0-4 start. The Steelers are 2-4 on the road. After their trip to Baltimore, they have just one away game remaining -- at Lambeau Field.

Raiders vs. Cowboys vs. a nap

Another trip to the Poe House

Pittsburgh lost their first game in Baltimore on December 1st, 1996. After that they won 6 games in a row in Maryland. Then, it was the Ravens turn -- they won 5 straight home games against the Steelers from 2003-2007. The two teams have gone back and forth at M&T Bank since, with Pittsburgh winning in 2008, 2010, and last year. In other words, Pittsburgh leads the all-time series with the Ravens in Baltimore 9-8. At home, the Steelers lead the Ravens 14-7 since the moved from Cleveland. 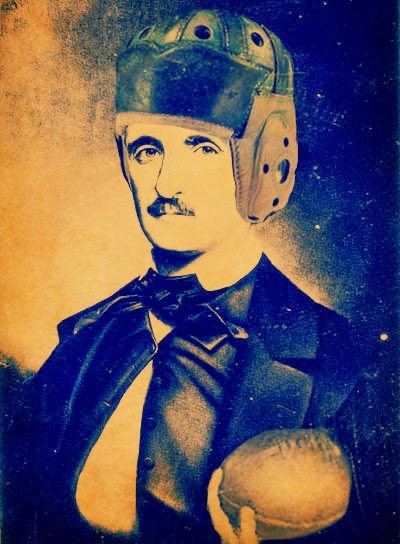 So that's why they named a football team after a poet...looks like he was a big fan of the game.

I actually think it's pretty cool (conceptually) that they named their team after city icon -- even though he died long before football existed. It's certainly less inclusive than naming your team after an entire industry, but I can see the value in it. At least a lot more so than something like the Cincinnati Bengals. Are there a lot of wild tigers roaming around the Findlay Market?

Like a crazy little jackrabbit or an ocelot or something.

A.J. Green is easily one of the best receivers in the game, but Antonio Brown did something that Green couldn't -- get the best of super-corner Joe Haden. Brown was exceptional again on Sunday, going for 92 yards on six catches and scoring a touchdown on a beautiful pass from Ben Roethlisberger.

Of course, it'd be pretty shortsighted to say that performance makes Brown a better receiver than Green. They really aren't similar enough in their approach to be compared on any meaningful level -- at least when it comes to their match up with Haden. Remember how badly the Bengals beat the Browns in their last game? Well, despite just 2 catches for 7 yards, AJ Green was more than likely a big part of the team's offense because his mere presence is enough to alter the defense's entire game plan. And that's beginning to be the case with Brown as well.

The Ravens won't want to let him get loose, so elevated play from Heath Miller, Jerricho Cotchery, Emmanuel Sanders, and even Markus Wheaton might be needed to keep the passing game on track. But even if they decide to blanket Brown all day, he's proven he can make plays while facing pretty much any coverage. He's quickly becoming respected as one of the most elite wideouts in the NFL, no matter who you compare him to.

The worst pun in the world

Jason Worilds was a revelation against the Browns. According to Pro Football Focus, it was tied for the best performance of his career. He put up a +3.3 grade for the game (his other +3.3 was also against the Browns), with 9 QB pressures and a solid game against the rush as well. PFF named him one of their players of the game under the heading "Emerging Worilds." It's not actually the worst pun ever, and if Jason keeps playing like he did on Sunday, it will have a lot more competition in the realm of stupid puns about the low-hanging fruit of his last name.

Anyway, the important part is that he was a monster on the field, consistently beating Cleveland's right tackle Mitchell Schwartz.

Baltimore employed their deep ball/pass interference strategy against last week against the Jets. One pass -- a 60-yarder to Torrey Smith -- led to a field goal, and the other was a 66 yard bomb to Jacoby Jones. Surprisingly, the strategy didn't pay off in the form of a defensive PI call even once in the game. But don't let that fool you. Baltimore has been pretty successful in the deep passing game de4spite Joe Flacco's poor numbers on passes downfield. All it takes is one (or in last week's case, two) deep balls to make a huge difference in a football game. And the receiver doesn't even have to touch the ball sometimes.

I did a brief rundown on this strategy in the last BAL-PIT preview, but I'll reiterate: it isn't cheating. It isn't even dirty. A lot of teams do it, but it seems like the Ravens have really taken it to another level. The Steelers will need to put up something of a safety net at the back end of the defense to avoid long TDs, and sound technique will be pivotal in keeping the refs as quiet as possible.

He didn't really go anywhere, but he's back! Wow. What a game. I think he's one of the best players of all time. But I can understand the arguments for a few other guys -- well, pretty much just Ronnie Lott as far as safeties go. The thing I could not understand is how anyone could form an argument that Polamalu isn't one of the coolest players of all time...unless that argument was the he is definitively and SINGULARLY, the coolest ever and has no appropriate competition. Earlier in his career, it was a matter of opinion. But now, it's just a plain, old fact.

Getting to watch him face off against the Ravens again is a privilege that should not be taken for granted. And it could be another amazing performance, even if the last one came against a human debacle.

He's looked sluggish at times this season (especially against the Patriots), but even a watered-down version of Polamalu is at least one-part Polamalu, and I'll take that over any umbrellaed cocktail of buzzworthy twentysomething safeties any time.

If the ground games for these two teams look like they did in the first meeting, Pittsburgh has an excellent chance at sinking their rivals' hopes for a repeat. But even if both teams struggle to run, I like the way Pittsburgh has been playing -- obviously. If they can limit the Ravens deep ball strategy and put the clamps on Rice and Pierce, it's going to a fun game to watch.

The myth of momentum is my irrational platform for believing in the Steelers this week. It seems inevitable that this game ends up closely contested, but going to buy into that myth this week.

Steelers vs. Ravens Thanksgiving Night: Everything you need to know