The more Jason Worilds continues to look like a starting NFL linebacker on the left side of the Steelers defense, the more LaMarr Woodley develops a striking resemblance to Willie Colon.

If only the question was as easy as, 'Who should start at left outside linebacker for the Pittsburgh Steelers when they take on the Baltimore Ravens Thanksgiving night?"

Unfortunately for the Steelers, problems are always more complicated than what meets the eye at first glance.

If you asked the team this question before the beginning of the season, the answer would have been LaMarr Woodley.  The Steelers restructured his contract in the off-season to save some cap space this year.  By doing so, they added even more dead weight to the remaining years on his deal.

While his contract remains one of the most cumbersome on the roster to the tune of over $14 million dollars in dead money attributed to the three remaining years after 2013, if the Steelers were to seriously consider sticking with Worilds long-term as the starter on the left-side, then this would have to be Woodley's final year with the Steelers.

That's a pretty hefty decision to make considering Woodley's contributions to the defense over his career, after Worilds posted two respectable games after being considered all but a bust after being selected by the Steelers in the second round of the NFL draft.

As Dejan Kovacevic of the Pittsburgh Tribune-Review joked recently during a spot on TribLive Radio, "Two good games (full of quarterback pressures) and we're singing about him like he's Richard Dent."

However, Worilds career has been full of moments like his current hot streak.  In a dismal 2012 season, Worilds led the team in sacks with five.  Most were denounced as free-rushes due to overload blitzes, but the stats remain the same.  The city of Pittsburgh found itself placing its hopes on Worilds' inexperienced shoulders several times as both Woodley and James Harrison spent their share of time in the trainer's room and off the field.

Yet to the eye test, he has often looked out of place, out of sync and out of pass rushing ability.  He never replaced the ferocity Harrison would take with him to the sidelines.  Though to be fair, Worilds spent more time spelling Harrison than he did Woodley.  Maybe this is why he's looked lost more often than not?

Kovacevic, in the same conversation, pointed at Worilds spin move as the reason for his higher level of success on the left side as opposed to the right.  On the left side, Worilds is able to rip inside of his blocker placing him in immediate pursuit of the quarterback - as confirmed by the number of pressures he has racked up over the past two games.

The same move executed from the right side of the line would put him 5-7 yards past the quarterback and completely out of the hunt - an image easily found in almost any replay involving Worilds over the first three years of his career.

Surely one good pass-rushing move does not a defensive cornerstone LOLB make, but it does make for a great starting option until opposing offensive lines figure out how to stop it without sacrificing protection elsewhere to double-team him.

Normally, this would be a good thing for the Steelers, but this decision could become about more than just an AFC North divisional rivalry game in the blink of an eye.  Woodley is nearing a return to 'healthy', and he is anxious to get back on the field.  He is fully aware of what Mr. Worilds has been up to in his absence.

The smart move would be to start Worilds against the Ravens, and give Woodley the extra week and a half to be fully healed for the final push toward the post-season.  The problem is, Worilds may play exceptionally well once again, forcing the team to have to decide which player to start in Week 14. And then possibly Week 15, and again in Week 16.

Turning Woodley's benchwarmer up a notch, is the fact Worilds will be an unrestricted free-agent next season.  Worilds has not quite done enough to warrant a Woodley-like deal from another suitor, but it may not be completely out of the question to be able to sign him as a starter for an average of about $3- or $4 million per year - less than half of Woodley's base salaries, not counting dead money also tied to his contract for cap purposes.

And if the Steelers wanted to part ways with Woodley and his enormous contract, this off-season would be the perfect time. 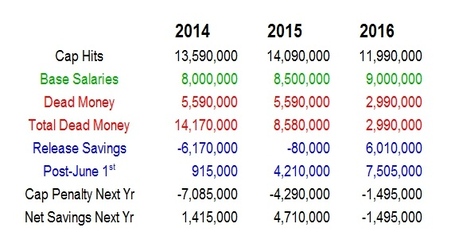 The first red flags which pop up when looking at Woodley's numbers are the cap hits, especially 2014 when the total dead money remaining on his contract exceeds the individual year's cap hit ($14.17 mil > $13.59 mil).

The 'Dead Money' column represents the amount of prorated money attributed to each individual year from previously received bonuses and restructures.  The 'Total Dead Money' column is the biggest flag of all, almost guaranteeing the team cannot afford to release him, not when it would cost them over $6 million in cap space even after erasing his $8 million salary from the books.

Willie Colon also seemed so 'indispensable' once upon a time, right up until the time the team terminated his contract with a post-June 1st designation which allowed them to split his 'Total Dead Money' among this year and next year.  Granted it saved the team a significant chunk of cap change this season, but the team will have to absorb a $4.3 million cap penalty in 2014 as a result.

By releasing Woodley this off-season in the same manner as Colon, the team would actually save $915,000 against 2014 after deleting his base pay.  In 2015, he would create a similar cap penalty, although much higher ($7.085 million), although after removing his $8.5 million base salary the team would net a savings of $1.415 million against current projections.

Neither savings are significant enough to cover the salary of Worilds even at this post's modest estimate, but they are enough to cover a draft pick scheduled to make higher than minimum in each year.

At the same time, the Steelers did restructure his deal this past off-season knowing they would be adding more 'Dead Money' to the rest of his deal - a sure fire sign they planned on him being here for the deal's duration.  Until the team states or acts in another manner, Woodley is still viewed as the franchise's starting LOLB; but Worilds is beginning to catch their attention.

It's amazing how quickly things can change for a player like Worilds, who was expected to be the start on the right side entering the season despite the drafting of Jarvis Jones, and now is pushing the entrenched starter on the left-side for his job instead after not being able to completely hold off the struggling rookie.   Evidently, side does matter.

If Worilds gets the start over a healthy Woodley on Thursday and struggles, things will change again just as quickly, and the the focus will shift back to Woodley.

If Worilds gets the start over a healthy Woodley on Thursday and thrives once again,  anything can happen.