Steelers’ Brett Keisel was right; this team is not prepared to play

It was a “HE SAID WHAT?” moment that Steelers Brett Keisel gave me after the debacle that was the game against the Oakland Raiders. Sometimes you see or hear something over and over again before it fully registers. Steeler Nation better hope someone is listening and finally does something about it.

Share All sharing options for: Steelers’ Brett Keisel was right; this team is not prepared to play

We have been witnessing the team's slow starts in games for more than just this season, but Keisel's admission about the Steelers not being ready to play even before taking the field, made in the aftermath of the team's 21-18 loss to the Raiders in a game that wasn't nearly that close until late in the fourth quarter, stopped me in my tracks.

I've been working on a project that chronicles the passing performance of Steelers' franchise QB Ben Roethlisberger over the course of this season, breaking down his performance by pass type (Shotgun, Center, No Huddle), his passer rating and various stats. Upon reading Keisel's words, I went back to my raw data to see if I could quantify whether this was just a "we have to get better" platitude or determine once and for all whether this is a debilitating influence on our team's performance this year.

The Steelers' offense lives or dies at the hand of its franchise QB Ben Roethlisberger. At first I thought that if there was validity to Keisel's admission, it might start at QB.

Over these first eight games of the 2013 season here is the breakdown of Roethlisberger's passing performance as well as similar cumulative breakdown of the opposing quarter backs.

The passer ratings for both tables are summarized and broken down by quarters in the graph below:

Even with New England Patriots QB Tom Brady and his 432 yard 4 TD 151.8 passer rating beat-down of the Steelers added to the mix, opposing quarterbacks have a cumulative passer rating of 89.4 that barely outscores Roethlisberger's 88.6. More importantly, while his passer rating for the first quarter is not stellar, opposing QBs have not performed much better and in the second quarter there is a huge advantage to the Steelers. Overall, The Steelers' QB has a higher completion percentage (64.9 to 61.7), has thrown three more TDs (and unfortunately five more INTs) than the opposing QBs; he's thrown for 582 more yards on 68 more attempts with 52 more completions.

While Roethlisberger's interceptions and fumbles haven't helped, I thought that Keisel's observation might be demonstrated by a disparity in the time of possession in the first quarter; that maybe the feeling of the six Steeler losses seemingly taking forever to be over meant our opponents were beating us at time of possession overall. But as you can see below, the Steelers hold a 56 second advantage in ToP in the first quarter, and overall there's only a 50 second difference in ToP between the Steelers and their opponents in this season to date.

By contrast, the Patriots offense is ranked 24th in the league, possessing the ball 1:14 less than the Steelers, yet they're 7-2. So simple ToP is not the key, but it holds the answer as to just how bad the Steelers have been in getting themselves ready to play, as Keisel noted.

I dug deeper and decided to look at the efficiency with which the Steelers and the opposing teams used their time of possession, and the results are not pretty. What the following table illustrates is most damning in terms of what Steeler Nation has been decrying for more than just this season, but which has reached such proportions that not only does it validate what Keisel observed; it calls into question everyone on both sides of the ball; offense and defense, players and coaches alike.

This table disregards how the points were scored (rushing, passing, FGs, turnovers, etc). Basically what this table lays bare is the contrast between a Steeler offense that cannot score efficiently and a defense that has allowed the opposing offense to rack up points at a horrendous rate, especially in the first quarter.

UPDATE: Thanks to Kevin78 for heads up on calc error: Previous table didn't average out points per game. End result and ratio between Steelers and Opponents is still the same - The Steelers are being grossly outscored in all quarters except third 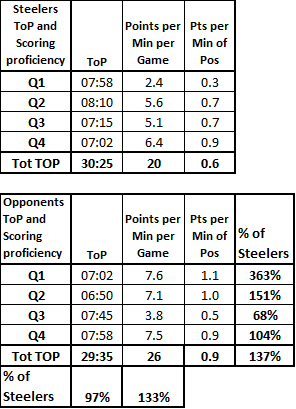 To make Keisel's point more graphically, here is a comparison by quarter of the Steelers' and their opponents' Points per Minute of Possession:

Opposing teams are consuming less than half of the allotted time in the first quarter, racing out to early leads. But if you look at the second quarter where the ToP battle is reversed and the Steelers control more of the clock, they're still only scoring 0.7 points per minute, while the opponents maintain their blistering opening pace, going from 1.1 points per minute to 1.0 points per minute of possession.

Cliques within Steeler Nation scream for the heads of Haley, LeBeau, Tomlin or Colbert but this simple analysis shows the problem is far more complex than simply changing the offensive or defensive scheme.

Keisel will stress need to get off to better start 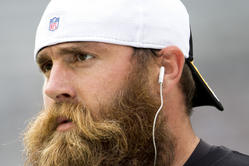 Steelers still waiting for someone to answer Keisel's charge

While doing something radical to the offense might increase the paltry point production, where do you start? Blame Haley all you want, but where is his responsibility for a defense that allows teams to jump out so quickly to early leads; the defense is allowing opposing teams to directly influence the offensive game plan of the Steelers by forcing them to play catch up from practically the opening whistle. Conversely, the offense is not even producing a field goal's worth of points per minute of possession and this inability to move the ball and score places the defense in too many short-field situations for it to be effective series after series.

Unless you subscribe to the point of view that the vast majority of players on the Steelers are physically incapable of playing at a competitive professional level, which I most certainly do not, then what you are left with is the inescapable conclusion that the mental environment which permeates the team, both in the locker room and on the practice and game fields must be the root cause of this malaise that has taken over what was, rather recently, considered one of the premier performing teams in the NFL.

And the mental environment, meaning the teaching and motivating, is ultimately within the purview of the coaching staff, from top to bottom. Forget the "there are no leaders in the locker room" stuff; while they have an influence, leaders are forged from the conditions of the team as a whole. Hines Ward has been gone for two years, as has been Aaron Smith and James Farrior; the lack of leadership is not from a dearth of replacement players, but from the absence of an environment from which such leaders emerge. Since players come and go all the time due to roster moves, free agency or injuries, who is ultimately responsible for ensuring and the proper environment exists that has players mentally prepared to play, and affords those few dominant personalities the opportunity to come to the fore front?

One might argue to the contrary, but a 10 year veteran has raised the issue and the data speaks for itself; Keisel may say the players have to be ready to play even before they get to the stadium, but based on a 0-4 start to this season, and 2-6 record midway through, there's more at fault here than just "players not ready to play". The leadership of an entire coaching staff has failed to create a sense of urgency and the environment necessary to induce readiness in the players, and after two seasons of sub-par performance, it appears the environment they have created is so sterile that it is inhibiting the growth and emergence of new leaders from the collection of players on the roster who might join Keisel in leading the team out of the depths of the mediocrity it currently finds itself in.