Much fuss was made about Ben Roethlisberger's brief comment that directed the reporters to the direction of Todd Haley when asked about the offensive scheme. Ben Roethlisberger clarified yesterday that the quote used was taken out of context.

Literally since the day Todd Haley was announced as the new offensive coordinator, there were articles to be read about how he and Ben Roethlisberger weren't going to have a good working relationship. Several articles are written about their relationship and how there's "friction," or confrontations or criticism of Haley's play calling.  Don't believe me? This is what you get on the first page when you google "Todd Haley Ben Roethlisberger": 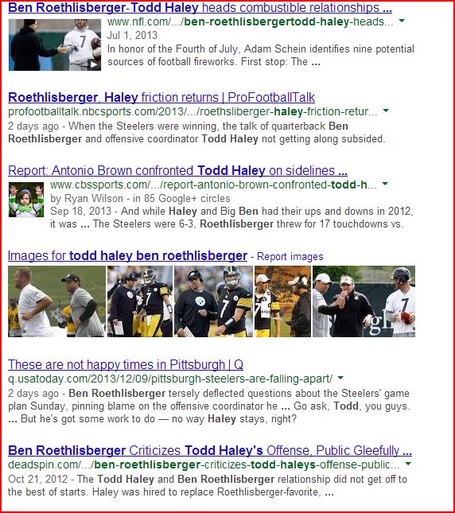 So it was no surprise that after a loss that clinched the Pittsburgh Steelers for a second straight season without a winning record, that you would read more about their "combustible relationship." After the loss to the Miami Dolphins on Saturday, it wasn't long before this broke the news:

Ben Roethlisberger asked why Steelers didn't run as much in the second half. Says, "No idea. Coach Haley's over there. You can ask him."

And promptly, NFL.com released a story about how Roethlisberger was "irked" by the Steelers' "game plan."

Does this all sound familiar? What also might sound familiar is Roethlisberger having to clarify questions about his feelings towards the team in the media, which he did yet again on Monday.

"It's unbelievable," Roethlisberger said during his weekly radio show on 93.7 The Fan. "It gets blown up and it's by reporters that come in there and ask the dumbest questions after a game, and it makes it ridiculous when they only take part of your answer."

"It was taken way out of context. There is absolutely no issue between coach Haley and I. I love where this offense is right now."

Roethlisberger claims that he was simply distinguished that he makes the calls from the no-huddle and can answer questions as to those decisions, while Haley makes the calls during the team huddles. Roethlisberger would also continue in the interview to say that he likes where the offense is going.

"I'm really pleased with where this offense is," Roethlisberger said. I think we're getting better every week. Obviously we're not winning the football games, which is our ultimate goal. But it's hard to argue with the way the offense has been playing, the success that we feel like that we're having,."

It seems to fit the mold, Roethlisberger has thrown for the most yards through the first 13 games of a Steelers' season in franchise history, and threw three touchdowns on Sunday to surpass Terry Bradshaw as the all-time leading quarterback in that category.

Now that the Steelers' playoff chances are next to nothing, much attention will be directed towards how the team plans to move forward. Talks will be had about re-signing Ben Roethlisberger as he approaches the end of his contract and the team will be pressed this off-season to make decisions about team leaders and veterans whose contracts end, such as Ryan Clark, Brett Keisel, Emmanuel Sanders and Jason Worilds.

This off-season being the first time since 1999 that the Steelers will have two consecutive seasons without a winning record, there will also be many questions as to the team's identity (as if there weren't enough already). Part of that identity will be the question of Haley's play calling and his chemistry with Roethlisberger and the offense.

A major question moving forward will be to see whether the comments like these that Roethlisberger has made were candid support of Haley in the Steelers' system, or dishonest commentary in attempt to keep potential fires from spreading. If the team keeps Haley and Roethlisberger for another year, it may be another blow in what could be considered a witch-hunt of an issue between two professionals.

Either way, just don't expect to stop seeing articles about "combustion" between the two until either the team makes a playoff run, or loses one of them.