The Steelers are about to experience a logjam at outside linebacker with Jason Worilds heading through the exit, LaMarr Woodley squeezing his way back in from the bank and Jarvis Jones trying to fit in anywhere he can.

LaMarr Woodley is not going anywhere. He will definitely be a starting outside linebacker for the Pittsburgh Steelers in 2014, but on which side and for how long is anybody's guess.

While Woodley will be the sore thumb in this positional grouping, the real question is how impressed are the Steelers with the performance of Jason Worilds who has seized Woodley's former spot on the defensive left side; not whether the team can afford him.

Every team can find a way to pay a difference-making pass-rusher. They make ways if they have to. It's finding the player who wants to play for your team which is the difficult part.

Granted, the team doesn't really have the cash on hand already to pay the free-agent Worilds, but they will once they've restructured several other contracts and released Levi Brown. 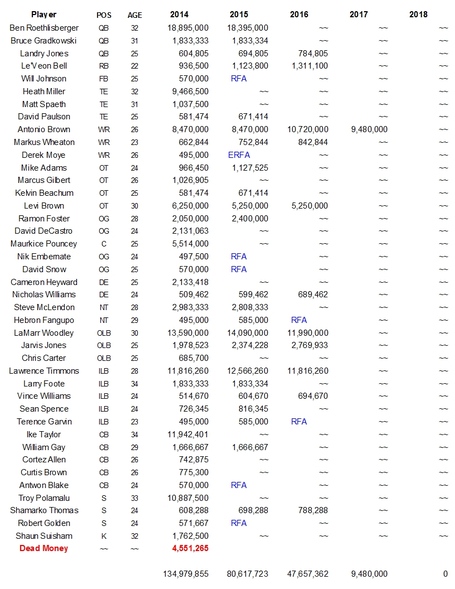 Unfortunately, not a penny can be spent on Worilds until some of the heavier cap hits are dealt with - most notably in this space, the contract of LaMarr Woodley. His deal leaves the Steelers with few to almost no good options, and neither Jones or Chris Carter possess a contract capable of clearing cap room.

No one can deny Woodley's production on the field when healthy, although his most productive years came with James Harrison on the opposite side.

His propensity for missing time over the past few seasons have led many to wish for the player and team to negotiate a paycut, but this is the least likely option of them all. Woodley's agent secured that contract for his client, and will be unlikely to budge much more than a million or two, if anything at all.

Right now, Woodley's side holds all the leverage, with the dead money on his total deal of $14.17 million surpassing his actual cap hit of $13.59 million. The team can't really afford to release him and eat a $14 million hit to the cap for a player not on the field. Even releasing him after June 1st doesn't ease the pain.

The other thing to consider while debating Woodley's contract is the readiness of Jones to take over in a starting role. He has look unprepared so far, and expecting him to suddenly get it in one more off-season is wishful thinking. As Neal Coolong recently wrote, young players in the Steelers defense need time to grow. Jones may not be 'ready' until 2015 or 2016 anyways.

Woodley would be sorely missed if Jones is not ready to bear the load because Woodley was let go too soon.

The ideal scenario for Jones, the Steelers first-round draft pick in 2013, is to play behind Woodley and Worilds for at least one more season, two if necessary. In order to make this possible, Woodley's mess has to be sorted out to fit with Jones' schedule, and Worilds has to be re-signed somehow.

The problem with Woodley's contract is the Steelers will have to pay the piper eventually, unless he accepts a paycut. Restructuring to escape mammoth cap hits only makes things worse. 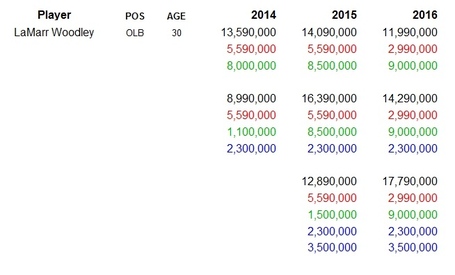 No matter which restructure option you choose, nor the year you would choose to release him after June 1st; there is always at least one year the team will end up paying over $7.5 million against the cap for a player not on the field. The best they can do is $5.59 million, and that is only if team does absolutely nothing to his contract in 2014.

Taking this course of action would require Jones to be ready to take over in 2015. The fact Maurkice Pouncey, Marcus Gilbert and Cameron Heyward will be facing larger hits than the team has become accustomed to make it difficult to let Woodley's deal go untouched again in 2015; and the smaller dead money in designation in 2016 make it all the more tempting to schedule an exit for 2015.

As for Worilds, because Woodley's deal is being left alone, his deal will have to be of the backloaded variety like we proposed for Ziggy Hood in the defensive line breakdown.

This example illustrates a 5-year, $25 million dollar contract which includes a $5 million dollar signing bonus. Three years of less than stellar film will prevent Worilds from demanding Woodley-money, but he has been effective enough to grab some attention in free-agency; although he is not likely to get what Paul Kruger grabbed from the Cleveland Browns this past off-season.

Depending on the Worilds bidding war, the team could add another $5 million to the signing bonus, only raising the cap numbers in each year by $1 million, taking the total value of the contract to $30 million at an average of $6 million per season.

To offer Worilds a contract at all, the team has to be sure he is the long-term solution at LOLB to compliment eventual starter J. Jones. There would be little point in offering Worilds a deal for any less than four years because the team is the tightest cap-wise in the first two-to-three.

This speculative exploration will stick with the example provided above, under the belief his market will be determined by his entire body of work and not just a five game stretch in 2013.

If another team is going to lure Worilds away from any potential Pittsburgh offers, they will do so with a front-loaded or heavily guaranteed deal similar to the structure of Mike Wallace's deal with the Miami Dolphins. However, the odds of Worilds re-signing with the Steelers are higher than most folks assume.

Something has to give in the Woodley department. Negotiating a pay cut may leave the Steelers inclined to keep him throughout the remainder of his contract. Standing pat would secure a nice set of paychecks in 2014 and a shot at free-agency in 2015 while he is still in his early-30's.

It will be a shame to see Woodley leave in such a fashion, but the same can be said for the rest of his fellow veterans over the past couple seasons. 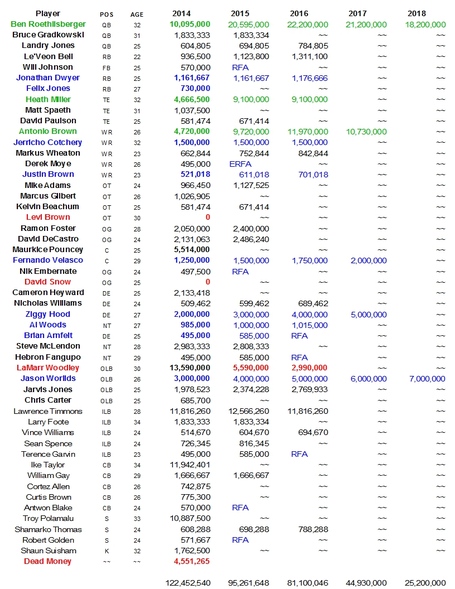