BTSC met up with Gary Pomerantz, author of "Their Life's Work," and asked his opinion on how the Steelers teams of the 1970s would handle some of the issues the Steelers have faced in 2013.

Share All sharing options for: Gary Pomerantz, author of "Their Life's Work," helps connect the 1970s Steelers teams to today

When time rolls past the 2013 season for the Steelers, one of the more compelling issues in discussion will be the amount of newsworthy items that transpired over the second half of the season.

Wanting to view some of these events from a more historically-oriented lens, we reached out to Gary Pomerantz, author of "Their Life's Work," the definitive source of the history of the 1970s Steelers, and a journalist who covered the team in those days.

He was kind enough to answer a few questions for us.

Was Chuck Noll known as being a coach who stepped on the field during play?

Absolutely not.  That wasn't Noll's style.

But Noll had his fiery moments on the sideline. Once, in a 1973 exhibition game against the Giants at Yankee Stadium, Noll berated Terry Bradshaw, and as the quarterback turned away, Noll grabbed him, and jerked him back to their conversation.

But Noll never would've stepped onto the field during a play.

Nor would he have ever angrily stuffed a photo into a referee's shirt pocket as Steelers Coach Bill Cowher once did during a 1995 game while arguing that officials had missed a call by penalizing the Steelers for having 12 men on the field. (The overhead photo proved they had only 11 on the field.)

How would Noll have reacted to the environment in which the NFL now operates? There is significantly more league involvement and seeming week-to-week fines and other methods of disciplinary involvement.

Noll would have adapted. And in the face of the scientific findings that link concussions to CTE, a neurodegenerative brain disease, Noll would've supported the new rules that protect players from helmet-to-helmet hits.

Don't forget Noll once was fined $1,000 by NFL Commissioner Pete Rozelle for comments he made about Oakland safety George Atkinson. In the 1976 season-opener, Atkinson had measured and then struck (with his forearm) an unsuspecting Lynn Swann in the back of the helmet; Swann crumpled to the ground with a concussion and missed the next two games.  At a press conference a day later, Noll said, "You have a criminal element in every society and apparently we have it here in the NFL, too. George Atkinson's hit on Lynn Swann was with intent to maim and not with football in mind. I'd like to see those guys thrown out of the league."  For these comments, Atkinson filed a $2 million slander suit against Noll; in a colorful trial in San Francisco the following year, a jury rejected Atkinson's arguments.

The point is, Noll spoke out against unnecessary violence then. And I think he would do the same now.

Ben Roethlisberger recently broke Terry Bradshaw's franchise touchdown passing record. Understandably, Roethlisberger barely spoke of it, wanting his legacy to be more of competing against Bradshaw's legacy of four championships. What was Bradshaw like when he broke the previous record?

I thought Ben handled that perfectly.  His post-game comments were about the game and the Steelers, not about Bradshaw. He low-keyed it, acted as if it didn't happen. It almost seemed as if Roethlisberger had torn a page from a publicist's handbook, and put it to good use. There is no doubt that this record carries meaning to Ben. He is a consummate competitor - we see that every Sunday - and Bradshaw has been the gold standard for Steeler quarterbacks for a few generations.

How did Bradshaw react when he broke the previous record? He was oblivious to it, same as everyone else. It wasn't like he'd just scaled Everest. He moved ahead of Jim Finks (55 TD passes as a Steeler) in 1975 and then ahead of Bobby Layne (67 TD passes) two seasons later. The record didn't carry much significance then.

Would Jack Lambert have been able to play in the NFL's new era; a largely reduced strike zone on offensive players, scores of "defenseless" players and hefty fines for speaking out about these issues?

Let's get one thing straight:  Jack Lambert could play in the NFL in ANY era. He was a physical player with a ruffian's spirit. Lambert would shove opponents after plays, and push off their face masks to stand up. Several times opposing players charged Lambert with being dirty, a cheap-shot artist, but he wasn't.

His unique body type - reed thin for a middle linebacker - and his adrenalized playing style drew attention: his stamping feet before the snap, his toothless mighty roar. They don't make ‘em like Lambert anymore.

Their Life's Work: The Brotherhood of the 1970s Pittsburgh Steelers, Then and Now 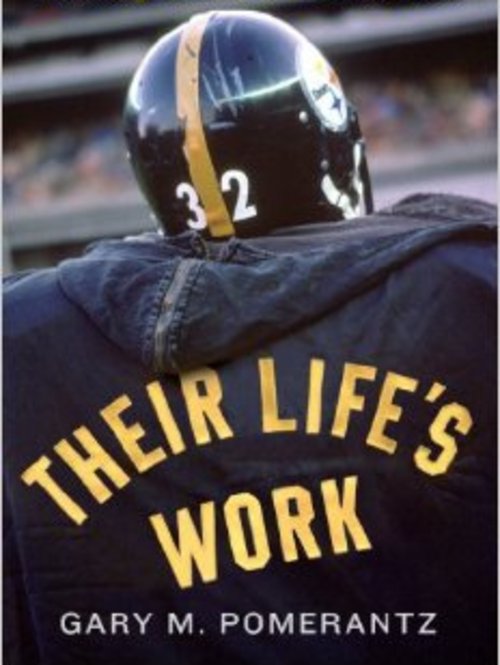 A full review of Pomerantz's book, which came out in October

Lambert played at 220 pounds. If he played today (and EVERY team in the NFL would love to have him), he'd weigh 240 pounds. No doubt he'd complain about today's rules protecting quarterbacks, and he'd probably say that today's girly quarterbacks buy their dresses at Bergdorf Goodman. He'd collect fines for saying that, but that wouldn't bother Lambert, or change him.

One of Lambert's defining qualities often gets overlooked:  the guy was a smart ballplayer. He studied the game, and opposing team's tendencies. He called the defensive signals.

Replace Mike Tomlin with Chuck Noll as the Steelers head into Week 16 all but eliminated from the post season. What would Noll tell the team?

Noll would tell today's Steelers exactly what Mike Tomlin is telling his team now:  "Play hard. Win." In between the lines, players would know they were playing to hold their jobs for next season.

How do you think Antonio Brown would have done playing on the 1970s Steelers? What if you replaced Brown on this year's team with John Stallworth? Lynn Swann?

With his talent and speed, Antonio Brown would have fit nicely with the 1970s Steelers. In mid-decade, the Steelers had a remarkable receiver corps with future Hall of Famers Lynn Swann and John Stallworth, plus Frank Lewis (397 career catches), and Ronnie Shanklin.

Antonio Brown is a big-play receiver. He's already caught 246 passes - including 95 this season - and he's only 25 years old. Those are video game numbers. Today's Steeler offense has a vastly different passing game mixing in many short-range throws. I suspect that Brown would have loved the way Bradshaw threw deep downfield.

Stallworth never caught more than 80 passes in a season. Swann's season-high was 61 catches.  No doubt both would catch many more passes in today's Steeler offense.

Would the Steelers in the 1970s keep LaMarr Woodley (often injured but productive)?

Noll showed loyalty to some of his aging stars near the end of their Steeler careers, Dwight White and L.C. Greenwood, among them. He gave them an extra year on the roster. The players didn't see it that way, of course, but players never do.

It's difficult to know the answer to your question about LaMarr Woodley. I can almost hear Noll saying, "When this guy Woodley is healthy he's been a good player for us. We'll keep him."  But so much has changed in the NFL since the 1970s:  Player salaries, for instance. Woodley is reportedly due $8 million next season when he'll turn 30. Maybe he'll be asked by the Steelers to take a pay cut next season, or not. Woodley is a defensive force when healthy, but he's missed quite a few games with assorted leg injuries the past few seasons.

Your question raises a larger question for the Steelers:  what to do next season with some of their aging defenders?  Today, Brett Keisel is 35, Ryan Clark 34, Ike Taylor 33, Troy Polamalu 32, and Will Allen 31.

There is a Steeler lesson to be learned from 1979 when Noll chose to keep defensive end Dwight White, at 30, and release draft pick Dwaine Board, who then was swept up by the 49ers, became a pass-rushing fixture for a decade, and helped San Francisco win three Super Bowls.  The lesson:  be careful how long you hold on to your aging stars, especially when you've got young talent already in hand, and ready to go.