San Diego appears unaware of an NFL rule prohibiting more than six players lined up on one side from the long snapper. Apparently, the official staring at the play wasn't aware of it either.

Share All sharing options for: Official staring at seven Chargers on right side of field goal snapper

The NFL released the following statement on the matter, not that it'll change anything or make Steelers fans feel any better:

With 0:08 remaining in the fourth quarter of Sunday's game between the Kansas City Chiefs and San Diego Chargers, Kansas City faced a fourth-and-12 from the San Diego 23. The Chiefs attempted a 41-yard field that was no good.

On the play, San Diego lined up with seven men on one side of the snapper. This should have been penalized as an illegal formation by the defense.

Rule 9, Section 1, Article 3 (b) (1) of the NFL Rule Book (page 51) states that "No more than six Team B players may be on the line of scrimmage on either side of the snapper at the snap."

The penalty for illegal formation by the defense is a loss of five yards. This is not subject to instant replay review. Had the penalty been assessed, it would have resulted in a fourth-and-seven from the San Diego 18 with 0:04 remaining, enabling the Chiefs to attempt a 36-yard field goal. 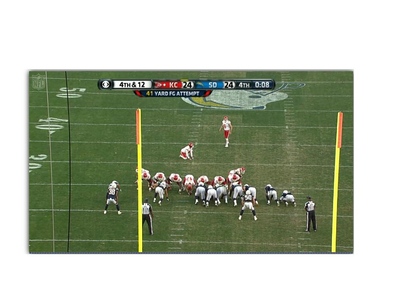 (nod to reader JRowden7 for this)

This is almost getting comical.

We complained whined wrote about a fumble that apparently didn't happen. Now, photos show a clear miss of NFL rules from an official who appears to be staring directly at the violation.

My Maths aint so gud, but thar seems to be eight seven players to the right of the snapper (eight are on that side but seven are on the line).

And our buddy, Mr. Official to the right, is either incapable of counting, or he's thinking about what flavor martini he plans to order at the airport lounge after the game.