It's no wonder NFL placekickers are all rumored to be headcases.

Even the most active only see the field for about 6 -10 plays per game. They are usually the least compensated starter on a team, despite being the only player in his positional group, having no backups. However, unlike any other player on the team, one mistake - one bad play - can cost a team the season, the player his job or even his career.

Shaun Suisham has reason to begin losing his marbles. In a sporadic career, caught in a ricochet between the Redskins and Dallas Cowboys, Suisham found an unlikely home in Pittsburgh after the Steelers parted ways with Jeff Reed, their kicker for their Super Bowl victories in 2005 and 2008.

Reed began the 2010 season as the kicker after competing with Suisham in training camp, but multiple alcohol-induced run-ins with police and bathroom towel dispensers had worn thin his welcome. After missing a 26-yard field goal against the New England Patriots, the Steelers released him and called Suisham back. Pittsburgh reached the Super Bowl by the end of the season, only to fall to the Green Bay Packers like the football did from the arms of Rashard Mendenhall.

Suisham had one of his best seasons as a professional, missing only three field goals all season. Two were 53+ yard varieties attempted in situations where a futile offensive effort left little other choice. The third was a combination of terrible snap and worse hold. However, his otherwise perfect season may not be enough to insure a return to his job in 2013.

Considering kickers can play into Methusalian ages, Suisham is in the prime of his career from an experience standpoint. His only major flaw is a lack of power. He has become consistent from 50 yards and in, but anything beyond is a coin flip. He has shown a distance range of 55 yards, but not as successful attempts. His touchbacks created on kickoffs improved, although the league has moved the tees closer since Suisham originally signed with Pittsburgh.

He has two years remaining on his deal, scheduled for base salaries of $1.425 million in each season. With only $337,500 in dead money associated to each year, releasing him would save $750,000 against the salary cap in 2013. While the cap savings seem negligible when talking about a kicker who almost had a perfect season, the team may decide to go younger and count the financial difference as a bonus.

The Steelers have already signed Daniel Hrapmann to a futures/reserve contract. Prior to the beginning of the 2012 regular season, Hrapmann had competed with Suisham in the preseason, kicking well with the majority of the workload. If the Steelers feel their offense may yet again be putting their placekickers in long distance situations with games on the line, they may choose Hrapmann over Suisham if he can convince them he has a longer range than his competitor. If the team chooses Hrapmann, Suisham's release would result in a total net cap savings of $345,000.

Kicker is not the only position of concern, either. Drew Butler, an un-drafted free agent and son of former Chicago Bears kicker Kevin Butler, won the job when 2011 starter Jeremy Kapinos couldn't get out of the tub, according to Mike Tomlin. Butler showed a powerful leg and pin-point accuracy at moments in his rookie season, however a blocked punt and several untimely poor punts leave his status for 2013 as questionable.

Kapinos, who landed on injured/reserve, is scheduled to be a restricted free agent. To choose a healthy Kapinos over a sophomore Butler would require the team to offer him at least a base level tender of $1.323 million. If the emphasis is cap savings, the team would be more likely to see if new special teams coordinator Danny Smith can correct his inconsistencies, and not spend the extra million for Kapinos.

In addition to the kicking conundrums, the team's long-tenured long-snapper - Greg Warren - will become an unrestricted free-agent following Super Bowl XLVII. While these players do not attract the same attention on the market as lock-down corners or franchise quarterbacks, they are one of the most pivotal pieces on the playing surface. It is hard to find long-snappers as consistent and skilled as Warren, but even he contributed to the team's playoff-ineligible collapse twice.

His only poor snap of the year led to Suisham's only miss inside 50 yards, and a blocking miscommunication allowed a punt to be blocked by the man who was lined up directly in front of him, who reached the kick untouched by Warren or punt protector Ryan Mundy. While either mistake are probably not enough for the Steelers to insist on a change, but they cannot afford to offer him much more than his minimum worth. Warren would require base salaries of $840k in 2013, $855k in 2014 and $970k in 2015. If he is willing to accept these amounts, the team would be unable to find a player with his experience and track record any cheaper, unless they go with an unproven guy.

In our positional explorations, we have carried both placekickers on our 53-man roster tracker. The team will only keep one, and so shall we. For now, we will move Hrapmann to our projected cut list.

In Hrapmann's vacated slot, we will insert Greg Warren with the amounts listed in this post - not so much a projection of an expected salary or contract length, but more of a budget allowance. Shaun Suisham will be added to our bubble list, even though his departure is highly unlikely. His release would require an exceptionally strong camp by Hrapmann or a desperate need for the $345k cap savings. 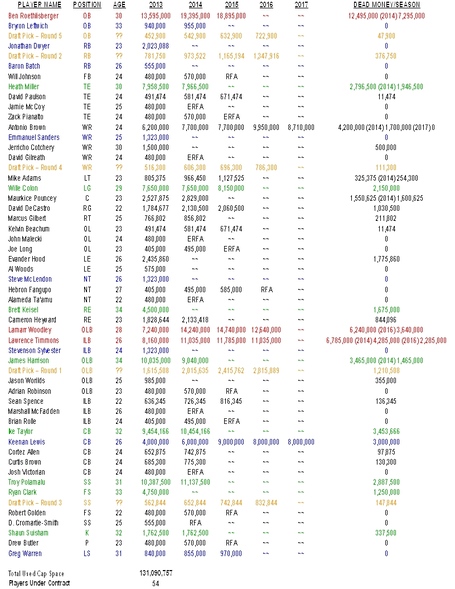 We've been placing draft selections through reader's polls. Our sixth-round selection is still open for voting, which can be found here. The poll below asks where our seventh-round selection will come from. With one more post in this series before the Baltimore Ravens and San Francisco 49ers end the 2012 season with the Super Bowl, we will quickly review our cap stance with the parameters we've established, examine the players we've determined are on the bubble and install our final two picks as per poll results.

After the Super Bowl is when the real fun begins.