Mocking the Steelers roster: The price for loyalty

Trying to keep their prized bulls may just cost the Steelers the future of the farm, if they don't put them out to pasture before it's too late.

Share All sharing options for: Mocking the Steelers roster: The price for loyalty

The Pittsburgh Steelers have reached a crossroads - a financial intersection of past negotiations, restructures and personal loyalty. They currently stand at the apex with multiple paths to choose from. Hindering the decision process is the uncertainty of what lies at each end.

Severely over the cap in comparison to most of the NFL, the team's roster finds itself afflicted with several aging veterans currently scheduled to have deep pockets as they near the end of their respective careers, after being parts of a multiple-championship generation. While their base salaries comprise the majority of their cap hits, it is the loyalty shown in the past to these players which has compounded the fear of a fiscal cliff scheduled for March 12th, the beginning of the league-year when all teams must adhere to the rule of 51 - meaning the top 51 salaries must fall below the salary cap of $121.1 million.

The Steelers are already currently over this limit by almost $14.5 million. 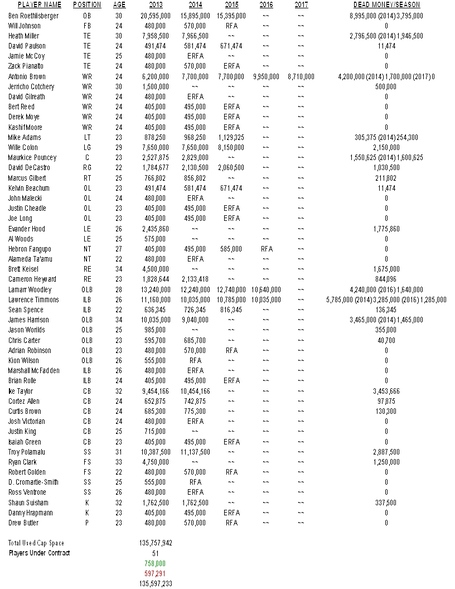 Unfortunately, Pittsburgh will be even further over the cap by the time the deadline rolls around.

Also included in this March 12th deadline, are all tender and tag offers. The Steelers are expected to offer most, if not all of their restricted and exclusive rights free-agents at least minimum level tenders. RFA tender levels are as follows:

Players expected to receive tenders, and the projected levels of those tenders, are:

Exclusive rights free-agents are players with less than three accrued seasons whose contracts expired naturally. The amount of the tender is determined by the number of accrued seasons currently accredited the player. Pittsburgh has two such players - Baron Batch and DeMarcus Van Dyke - both with two accrued seasons earning them each a tender of $555k.

The two largest question marks of these groups are Sylvester and Van Dyke. Van Dyke may not be offered a tender because of Josh Victorian, who is already under a cheaper contract and had decent showings toward the end of 2012. Sylvester, unless expected to take the place of former starter Larry Foote, is more likely to become a free-agent first, and then receive a cheaper offer than his tender level would have dictated. There is also the outside chance the team would pass on Sylvester altogether, using an amount similar to his tender to sign Foote for another season.

Teams have to also be considering all of their own free-agents which they wish to re-sign, and any which they have targeted leaving other teams, while vacating room to clear the cap by the deadline. The free-agents sign much later, but the team will have to prepared cap-wise to sign the player when the time comes. In addition to the aforementioned Foote, other UFAs include Max Starks, Ramon Foster, Doug Legursky, Casey Hampton, Keenan Lewis, Mike Wallace, Rashard Mendenhall, Charlie Batch, Byron Leftwich, Leonard Pope and Greg Warren.

For the sake of this discussion, we will offer Warren a three-year veteran minimum deal to remain the team's longsnapper. We will also offer the same projected $35 million deal we have used for Keenan Lewis in the past. If these are the only two UFA's re-signed, they will still only add to the cap problem. Here is what our top 51 would look like with these nine additions included, and our nine lowest salaries omitted taking $3.645 million with them. 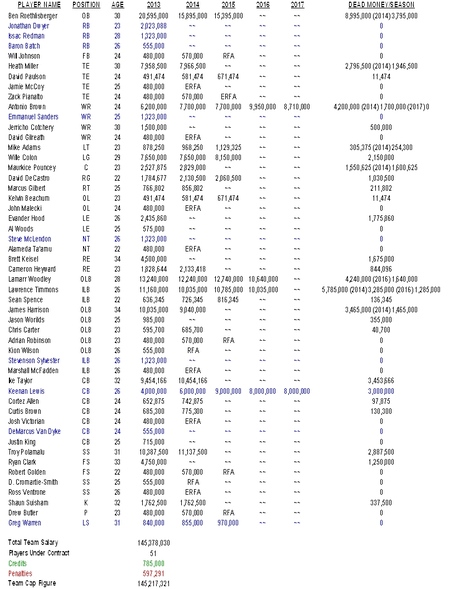 Please pardon my typo. The math is correct (I double-checked), unfortunately the Credits column should read $758k.

The nine players whose salaries fall below the cap count are:

On top of everything else, the team also has to be prepared to clear sufficient space to sign their upcoming draft selections.

With our adjusted team total expected to be more than $24 million over the salary cap, the Steelers have to decide which path will not only see them through to next season, but also will not bankrupt future seasons in the process.

This is where loyalty dies in the NFL - on the salary cap ledger. In the past, the team has relied heavily on restructuring contracts, pushing money into the future to save money in the current year, so they could save the men who saved a city.

We discussed the dangers of restructuring in our last simulation. However, as dangerous as it can be, with at least three players, restructuring is almost guaranteed. The only question will be how much. Ben Roethlisberger, Lawrence Timmons and LaMarr Woodley have been the first three contracts to be restructured in each simulation we've run, because all three are expected to continue to lead this roster as other aging vets reach the end of their own roads.

Timmons and Woodley have four years remaining on their deals, and are expected to see simple restructures. Roethlisberger has only three years left. He could see a simple restructure, but as the franchise quarterback with seemingly five to six seasons left in him, it would not be surprising to see him receive an extension in either 2013 or 2014 to create more future in which to push restructured money. 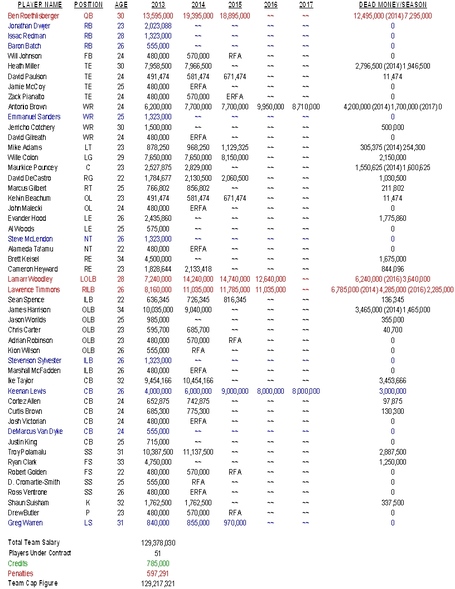 The Steelers will still have to clear more than eight million dollars by the deadline to get below the cap. Unfortunately, this is where decisions have to be made. Antonio Brown has been added to the list of probable restructures, due to the one-time $2.5 million bonus due in 2013; although restructuring his contract alone won't provide enough relief to forgive the remainder of blemishes on the roster.

Attention quickly turns to the other seven top contracts which all belong to aging, and sometimes injured veterans from glory days gone by - Ike Taylor, James Harrison, Troy Polamalu, Willie Colon, Brett Keisel, Ryan Clark and Heath Miller. Restructuring is barely an option with any of these players, unless an extension is involved. Here is what their contracts look like now:

Because Clark and Keisel are on the final years of their contracts, their only true options are extensions, releases or do nothing at all and let them play it out. Teams do not usually restructure a contract which has only two seasons remaining, but for the sake of discussion:

For quick reference, here is a breakdown on how the restructures affected each year. (Green = Savings, Red = Addition):

If current RFAs are not offered multi-year deals instead of tags, players like Dwyer, Sanders and McLendon will be free agents in 2014, as will Ziggy Hood and Jason Worilds. Considering none of their new contracts would include 2014 hits cheaper than their 2013's, the team will not want to push any more money into future years than they have to. While simple restructures would put us under the cap, with enough room to sign draft-picks and another free-agent or two; each one adds a significant addition to following years.

The front office could delay the inevitable, and offer extended restructures to soften each cap hit by giving more years to spread converted money across. However, players like Harrison, Keisel and Clark are reaching the boundaries of playing age. They may be able to play a solid 2013, but will they be able to uphold the standard in 2014 or 2015. Harrison and Keisel would be 36 by this time. The team could offer the extensions under the expectation of the player retiring before the total deal reaches fruition.

Of course, with the younger players who will be up for new contracts themselves over the next few seasons, releasing a veteran now not only avoids stiffer cap penalties later, but also prevents any guarantee clauses from coming due upon the deadline. Here is a snapshot of the savings for each veteran if released prior to the March 12th ultimatum:

There are countless ways for the team to find its way through this salary cap maze, but only the releases prevent burying the team even further in future years. The team will have to decide if the next generation of championship contenders are already on the roster simply waiting their turn, or if veterans are necessary to buy more time to accumulate better talent. Players could exhibit loyalty to the team by renegotiating their non-guaranteed base salaries to help clear cap space, but this decision lies primarily with the player, not the team. Team's cannot expect a player to renegotiate toward a paycut, meaning they will focus on restructures or releases.

Loyalty to their players has caused the team to find itself caught in cap quicksand. They may struggle and fight against the gravity of the situation for a while, but if they aren't careful, they'll be in over their heads with no end to their decline until they hit the bottom.

In our last installment, readers voiced their opinion through our poll which asked what should be done about Willie Colon. This time, the poll asks a slightly broader question about how our roster turnover should happen.