For which the author spent way too much time looking up data and making charts...

I began this journey through the AFC North last July. In the course of the initial posts I looked at each position group, dug up as much information as I could think of on the players, and posted a mind-numbing number of charts. I then gave my assessment of each group based upon what the stats seemed to say.

Each week during the season I updated the information, and here we are at the end. It’s time to pay the piper and face up to my pre-season assessments.

Unlike the pre-season post, though, I’ve decided to combine the information for all receivers. As I discovered in my addendum to the Quarterbacks final roundup, there was a lot of variation among the quarterbacks of the AFC North in who they threw to and how often. So it made sense to me to lump the TEs and backs in with the wideouts. (Don’t worry—you "three yards and a cloud of dust" folks will get a separate post comparing the running game.) However, it's honestly too much information for a single post, so I will divide it up into two parts. The final analysis, however, will take into account all the principal receivers, whatever their official title.

I began the pre-season post by making an assumption as to who would be the No. 1 and No. 2 receivers and the No. 1 tight ends. These were taken from the then-published team depth charts. The "depth chart" for my article was as follows [I’m also including the RBs as given last July:]:

(The Browns and Bengals did not have anyone clearly designated as a fullback.)

The first thing which will strike the notice of the discerning AFC North fan as they cast their eyes down the list is this: the only team in which all of the listed players were still active at the end of the season was the Ravens. Armon Binns was lost to IR rather early in the season, and Mohamed Massaquoi followed a few weeks later. David Johnson was lost to the Steelers in training camp. In all three cases it could be argued the players who stepped into the breach (Andrew Hawkins, Josh Gordon, and Will Johnson respectively) played as well or better than the men they replaced.

But there were other in-season injuries to our list as well, primarily to the Steelers. Antonio Brown missed several games with a high ankle sprain. Isaac Redman missed several games with an ankle injury. Mike Wallace missed the final game of the season with an injury, and Heath Miller was very seriously injured in the next to the last game. In other words, not a single player on the original Steelers list managed to play all 16 games. This was, of course, a large part of the narrative of the Steelers’ season as a whole.

The other teams were more fortunate. Of the listed players other than the ones previously mentioned, only Trent Richardson missed time, and only one game, although his effectiveness was questionable for a couple more games due to his injuries.

Of course, it’s a bit more complicated than that. The men who populate the depth chart prior to the season don’t always end in the same place, even if they remain injury-free. Sometimes they are supplanted by other players. One could certainly make this case for Andrew Hawkins vs. Armon Binns. By Week 6, Binn’s last game, Hawkins had bypassed him in total targets (36 vs. 29.) Binns was probably the better receiver—his final WR rating on Pro Football Focus was 95.5, vs. 90.7 for Hawkins, but for whatever reason Andy Dalton was throwing to Hawkins increasingly often.

In the case of Massaquoi, not only was Josh Gordon surpassing him in targets as the season progressed, Gordon was outplaying him. In the case of Isaac Redman, it’s really complicated, but I will address this in the RB post.

It’s one of the many ironies of this season to note the team who had the most stable personnel and scheme was the team who changed offensive coordinators in mid-stream, as it were. And those of us who felt (or perhaps "hoped," in the case of the rest of the AFC North) this would be the final straw for the struggling Ravens were obviously proved wrong, as head coach John Harbaugh’s bold (or foolish, according to taste) move was triumphantly vindicated.

But enough of what might have been. Let’s look at what was. All figures are for the regular season. Once I finish the series, if I have the time and inclination I’ll write a post-season review. But obviously as a Steelers fan I don’t have skin in the game this year, so don’t be shocked if it doesn’t happen.

I’ll begin with drop rates, giving comparisons for the entire league. Then I’ll get specific for the wideouts who ended up being the primary receivers. In the case of Cincinnati, there will be two, as A.J. Green and Andrew Hawkins caught the lion’s share of the passes, and the same for Greg Little and Josh Gordon. In Pittsburgh and Baltimore things were a bit more evenly distributed, so the three principal wideouts will be charted. I will compare these figures to their drop rate in previous seasons, if any. One tight end will be charted for each team. Because Pittsburgh never had a principal back, the receptions were fairly evenly split three ways, and all three backs will be documented. There was a very clear No. 1 back on all of the other teams.

Receivers may be called upon to block, either on passing or running plays, so I’ll give the Pro Football Focus assessments for this aspect of their play.

Finally, I’ll finish up with a plethora of stats and some rankings. If this sounds like an awful lot of stuff to look at, it is. So this post will just give the charts and graphs for the wideouts. The tight ends and running backs will get their moment in the sun in Part II.

Pro Football Focus has drop rates for the past five seasons, so I decided to compare as many years as the receiver was in the league, whether they began on the AFC North team they currently inhabit or not. Thus they are grouped by years rather than by team. In every case, the first chart is league-wide. The higher bar is the highest drop rate in the league among what I'm calling "high-target" receivers. I arrived at this number by averaging the number of targets per receiver, league-wide, and eliminating the receivers who fell under the average number of targets that season. I then determined the highest drop rate and the average drop rate for that subset of receivers.

So for each season a receiver played you can not only see his performance in 2012 compared to earlier seasons (if any,) but you can compare his performance to the league high and average. Thus you can observe that Anquan Boldin only once had a drop rate higher than the league average (2011,) and it was an uncharacteristically poor year for him in the metric. Conversely, you can see Jacoby Jones has improved steadily, but not until 2011 did he manage to even slightly best the league average.

Below each receiver's chart is a comparison of their "catchable targets." As usual, you can click on the chart and it will open in another window if you wish to be able to read the numbers more easily. Also note 2012 is the blue bars on the left-hand end, and you go back in time as you go to the right. Also, I wanted to keep the upper number on the chart consistent, and as low as possible, so note in 2010 the league high is 28%, but the chart only goes to 25%. 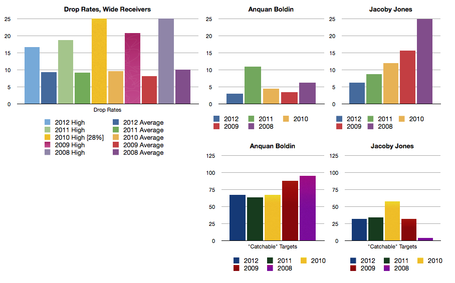 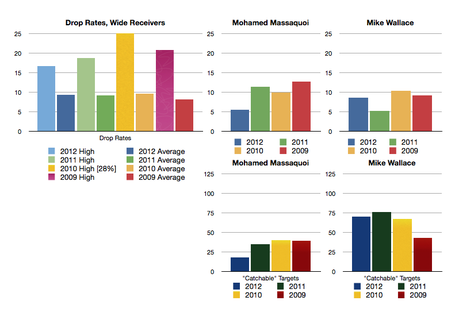 Note that for all the grief Mike Wallace has gotten about drops, he is below the league average for the past two seasons. Also note his targets dropped in 2012, but not a great deal. 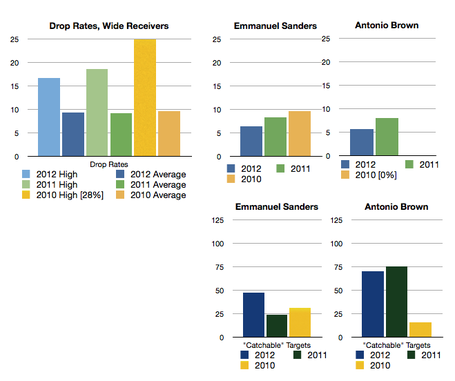 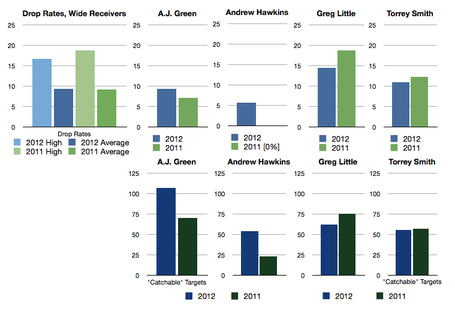 Finally we get to the Cincinnati receivers. Note the phenomenally greater number of targets for A.J. Green in 2012 than any of the other receivers on any team. At 158 targets, with 107 of them considered catchable, he was targeted more than three times the league average for the year, which was 34 catchable targets. The closest AFC North receivers were Mike Wallace and Antonio Brown, with around 75 catchable targets each. 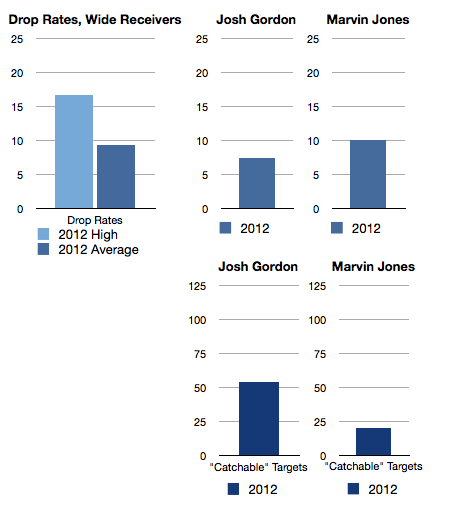 Anquan Boldin not only wins the AFC North Surehandedness Award, he wins it for highly-targeted receivers league-wide. The closest highly-targeted wideout to Boldin's stellar 2.99% drop rate was Roddy White, with 4.17%. If you expand the list from the single most targeted receiver on each team to the two or three top receivers, he still comes in No. 5 in the league, and with far more targets than the first four. (The closest is Percy Harvin, with 81 to Boldin's 108.) Comparing the AFC North, the order is:

Naturally, how well they hold on to the ball is scarcely the only judge of a receiver. There are lots of standard and not-so-standard rankings one can find. One I find quite intriguing is the PFF Wide Receiver Rating, which judges not just the receiver but the combination of receiver and quarterback. It ranks the receivers by the quarterback's rating when throwing to that particular receiver. I think it is quite interesting, so that's what you're seeing on the first chart. It is a ranking, so lower is better. The second is the PFF overall wide receiver ranking when all of the usual stuff is taken into account: Once again lower is better. The first chart is out of 87 players ranked, the second out of 107.

Pro Football Focus isn't the only site with a rating system. Here is another one:

The FO guys limit their rankings to players with a minimum of 50 passes (which also happens to be the league average number of targets this season, and my cutoff point for 'highly-targeted' receivers.) DYAR is a stat which measures the total value of a player. At least in their opinion. DVOA ranks the player's value per play. (Click on "Football Outsiders" above to find a more comprehensive explanation of the two metrics.) In both charts lower is better. 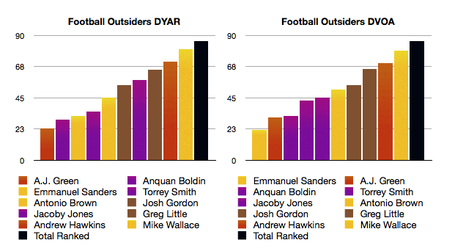 I thought it would be interesting, as a Steeler fan and Hines Ward admirer, to look at the figures for blocking. This is, again, a ranking, so lower is better: 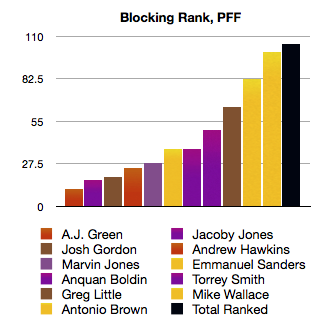 All I can say is, the "Young Money Crew" weren't paying attention when Hines was demonstrating. A.J. Green was, though...

Finally, here are a few odds and bits to look at: 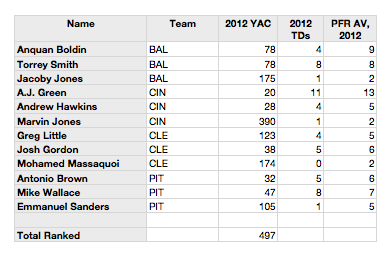 The YAC is ESPN's ranking for Yards After Catch. Again, lower is better. Conversely, higher is better in the next column, and the last. The final column is Pro Football Reference's Average Value for the 2012 season. A.J. Green, it would seem, is a stud by anybody's reckoning.

That will do it for now. As noted above, the analysis, including the prognostications I made last summer, will be in the following post. For now, let's just say I was possibly a trifle over-optimistic about the Young Money Crew...

In case you’re seriously bored (the draft is still a long way away, after all, and the Super Bowl is over,) here are links to the original articles. You can get the full run-down, all of the charts, and can laugh at my quaint naiveté as I attempt to rank each team’s position group: Wide Receivers; Tight Ends; Running Backs.