Part I: Outrageous assertions based on statistical “facts.” PaVaSteeler would argue these four metrics: Completion percentage, Yards Per Attempt, TD percentage, Passer Rating are all that is needed to measure a quarterback’s individual performance based solely on the K.I.S.S. concept (Keep it Simple Stupid).

There is no mystery to these statistics; there is no reliance on some “data mined” algorithm that hasn’t been proven. Rather, the four metrics used are comparable for any period of time even prior to 1970. Why?

Because this all-natural list (contains no algorithmic preservatives or artificial quantifiers) represents the top 10 percent performing players simply as compared to one another. A very detailed explanation of how these findings were arrived can be found through this link: Top QB Ranking Methodology

It doesn't matter what "era" the quarterback played in, for these metrics simply measure their effectiveness in what they did, and compares that effectiveness against the measured effectiveness of all others. The QBs of the ‘70s didn't pass as much as they do today, but what does that matter? Just because defenders could beat the Blount out of a receiver until 1978, all that means is quarterbacks passed less and teams ran more; however, quarterbacks still amassed completion percentages, touchdown percentages, still risked interceptions and still could be measured by a passer rating. It is those percentages that PaVaSteeler is using, and simply by comparing those of one quarterback against all others.

While it may appear that these metrics are redundant since the Passer Rating metric makes use of the other three, it is informative to break them out. For example, who would you say has the highest completion percentage of all quarterbacks who have played at least five years beginning no earlier than 1970? It is not the same player who has the highest passer rating, nor the player(s) with the most attempts or yards.

Consider this two part article a partial mea culpa for PaVaSteeler's last couple of pieces dealing with Steeler Nation's least favorite team and quarterback. But only a partial one, because the fact of the matter his, whether anyone wants to believe it or not, "he who shall rename nameless" still is in the top 13 percent of all quarterbacks who have played their first five years between 1970 and 2012.

But does that make him elite? For that matter, is Ben Roethlisberger elite; or Tom Brady, Drew Brees, or Kenny Stabler?

By definition, elite means the best of a class, the "most" of a recognized category or grouping, the "cream of the crop" if you will.

By this definition, the title of "elite" for quarterbacks should be reserved for one currently active player and those who are in the Hall of Fame in Canton, Ohio. To suggest otherwise is to make assumptions that can't be supported by consistent logic, nor takes into account many aspects of a player's career that don't lend themselves to quantification by the sabermetricians at all, but are recognized nonetheless as being equally important to the history and growth of professional football.

At what threshold do we cut off the discussion the top 10, at the tenth place in a list or the top 10 percent? And in terms of defining elitism for quarterbacks, what statistical categories are truly germane to the discussion? The favorite "flavor of the month" statistics such as DVOA, DYAR, QBR rely on so many factors outside of the quarterback's direct performance control, including such things as a baseline defensive performance metric or a proprietary algorithm such as "clutch factor"; metrics that have had few seasons beyond 2003 quantified to establish and verify them by the creators of these sabermetrics. And, as I pointed out in a previous article "The Fantasy of Mining Football Stats", all they are doing in reality is data mining, and the article points out the hazards and fallacies of such efforts.

Others, more "old school" would argue simply yards and touchdowns. But is this a complete enough picture to separate the true men from the boys; and is yards in of themselves truly a valid measurement of high performance, or simply reflective of a quarterback whose game relied on prolific passing?

For example, consider Peyton Manning. For all the derision he has recently suffered for having won only one Super Bowl and having a 9-11 playoff record, he is still talked about as being one of the "elite" quarterbacks because of his individual performance statistics, not his playoff or Super Bowl records (after all, Jim McMahon and Mark Rypien both won as many SBs as Peyton Manning).

But, for all his virtuosity, he only ranks tied at 17th in PaVaSteeler's final rankings. Why? Because with Manning, his statistical achievements are primarily due to the quantity of what he does; Manning ranks behind only Dan Marino and Brett Favre in terms of passing attempts and yards; second behind only Favre in completions and touchdowns. But true measurements of his effectiveness as illustrated by the four metrics used in this analysis (Completion percentage, YPA, Touchdown percentage, and Passer Rating) are not quite as stellar. For his career, Peyton Manning ranks 6th, 12th, 5th, and 5th respectively. And in his first five years of his career, he ranked 17th, 26th, 27th, and 27th .

It might be argued that such career rankings certainly earn Manning consideration for "elite" status; but if you think so, then you have to consider Dallas Cowboy quarterback Tony Romo in the same way. Romo's stats in the quantitative metrics used here (see above bold) surpass Manning's considerably. Again, Manning is one of the most prolific quarterbacks of all time; that does not, or should not equate to elite.

What truly sets Manning apart though, and that can't be quantified by any of the stats used today, is his uncanny ability to dissect a defensive scheme almost instantly at the line of scrimmage and adjust his play calling accordingly. This is partially reflected in the metrics used obviously, given how high he does rank; but you can't memorialize what you see him do on the field in numbers; the sheer virtuosity of his orchestrating both his own players' actions, as well as the movements and reactions of the opposing defensive players sets Manning above the rest and assuredly will be one of the reasons for his induction into the HOF, whether it is ever stated as such or not.

Another example: Joe Namath may be brought up as an example of a quarterback voted into the Hall of Fame who has no business being considered elite, given his career records. After all, he barely completed 50 percent of his passes; had a quarterback rating of only 65.5 percent, threw 47 more interceptions than touchdowns, and had a won/lost record of 62-63-4. Yes, he won a Super Bowl, but so have many other quarterbacks who aren't in the HOF.

Yet Namath is elite. Name one other quarterback who did as much as Namath in making the Super Bowl what it is today, let alone the NFL. Namath's brashness, his "bad boy" image, and most of all his fulfillment of his own prediction of victory for the upstart AFL Jets in Super Bowl III; all of this sets Namath apart from any other quarterback who has played the game in terms of having a direct impact on the game of professional football. It is just as much for these qualities, if not more so, than his statistics that Namath was enshrined into the company of other elite quarterbacks in the Hall of Fame.

Here is PaVaSteeler's Top 28 Quarterbacks since 1970. The shaded/bolded players are already in the Hall of Fame. The players in italics, with their winning records, are currently active.

There is one player whose performance in his short five year career is so far above all others who have played since 1970 that even a liberal minded PaVaSteeler would have no qualms about breaking his own rule and call him right now an "elite" quarterback.

The table below shows the top 28 players in this ranking who represent the top 10% of all quarterbacks who have played since 1970. The data is formatted in this manner: under each metric for every player there will be two numbers: X \ Y where X = the rank of a player's stat in a given metric (highest equals best performance thus ranked 1, second highest ranked 2, etc), and where Y = how many players had a higher ranking. For the First 5 Years category, the lowest possible ranking is 111; for the Career category, the lowest possible ranking is 285.

(please Note: Matt Schaub should be italicized; he is still active) 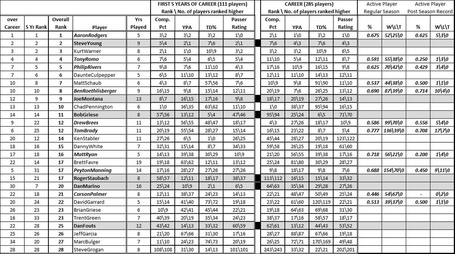 Part II of this series: How I Learned to stop Worrying (about stats) and Love the Game will explore this in much more detail