In Part I, PaVaSteeler made some outrageous assertions. In Part II, he will back those assertions up and continue his analysis of the concept of labeling a quarterback "elite" based solely on sabermetrics.

Briefly, we started with all 285 quarterbacks who played at some point between 1970 and 2012; eliminated all who did not play their first five years within that time range; subjected both their final career records, and their records after the first five years of their careers to comparison to the others. The result is a list of the 52 top performers; a list then ranked and sorted to capture the top 28, meaning the top 10 percent of all 285 quarterbacks who have played between 1970 and 2012.

The Green Bay Packers quarterback Aaron Rodgers is by far and away the top performing quarterback in terms of individual performance for the last 42 years, and as such, by the definition used at the beginning of this series, he is truly the "elite" quarterback actively playing today; the "cream of the crop".

Under the metrics used, Rodgers ranks either third, with two players ahead of him, or second or first, with two or one player ahead of him. For example, Under TD percentage, Rodgers score is 3\2, meaning he is behind only Dan Marino (2\1) and Kenny Stabler (1\0); not bad for having played 11 and six years less (respectively) than either of the men ahead of him.

As you can see from these player stats, the tried and true numbers don't necessarily match up with the perception of the player, nor do they capture other aspects that do in fact come into play by what should be the sole arbiter of the title "elite", the professional football Hall of Fame.

A very detailed explanation of how I arrived at my findings can be found through this link: Top QB Ranking Methodology

As a result of all this ranking and sorting, the quarterbacks listed represent the best in their class, category, group, the "cream of the crop". Six of the players are already in the Hall of Fame; twelve of them are currently still playing. That leaves ten retired players who are not in the Hall of Fame; of those, two most certainly will be inducted once they meet the five years retired requirement. That leaves eight players, all past the five year rule, whose career statistics say they should be in the Hall of Fame because they are in the top 10% of their class based on their stats. But they're not. Sabermetricians would claim that stats don't lie, but they're not in. Why not?

Because it's a team game, and it's a matter of perception, and even then there's no consistency; players who "lone wolf it" by performing at a high level on teams destined to fall short of the ultimate prize have little chance to be recognized for their service. Note, little chance doesn't mean no chance; just ask Dan Fouts. He led the San Diego Chargers to the playoffs four straight seasons, where he compiled a 3-4 postseason record. Quarterbacks such as Fouts did not have the benefit of other highly skilled players surrounding them, or on their defensive units, which allowed them to win multiple playoff games and Super Bowls. Does Tony Romo deserve to be in the Hall of Fame? Why not? His personal stats indicate he should be a lock for it; he ranks fourth out of all 285 quarterbacks. You can't disallow him just because he doesn't have a Super Bowl victory to his name, but allow Dan Fouts in, who ranks 25th and expect the argument that statistics are a true measure to remain valid.

In Romo's six years as compared to Fouts' 12, Romo has outperformed Fouts in: Completion percentage, Yards per Attempt, Touchdown percentage, Passer Rating, Interception percentage and Game Winning Drives per year. Neither player has won a Super Bowl, but Fouts is in the Hall of Fame, and there is widespread debate amongst Cowboy fans whether the team should even re-sign Romo.

Fouts is similar to Manning in that his claim to fame is his prolific passing; not the successful rate at which he completed passes (ranked 42nd), threw touchdowns (ranked 33rd), or his passer rating (ranked 60th). Rather, Fouts heralded the beginning of what we now have as a style of football; Fouts was the progenitor quarterback of the West Coast Offense, and in an era where the run was the "bread and butter" of a team's success, Fouts and his head coach Don Coryell helped change the face of the game. For this, he is well deserving his place in the Hall of Fame.

Maybe it was the company those HOF players kept, if you will, that helped them rise to the top. Bradshaw and Montana were the QBs of two dynastic teams; teams with fearsome defenses, powerful running attacks and wide receivers like Lynn Swann and Jerry Rice.

This concept of "the company they keep" is further illustrated by many of the names in this list that rarely come to mind when discussing the top quarterbacks; that is because many of these players have not had the luxury of being on dynastic teams, or even teams with decent defenses, or offensive weapons of great caliber. Names like Chad Pennington, Marc Bulger, or Steve Grogan. Yet these players' individual statistics are at the top of their class; after all, they're in the top 10 percent of all quarterbacks who have started playing since 1970.

Danny White went to three Super Bowls and has a Super Bowl ring. He was Roger Staubach's backup in Super Bowl XII (1978), in which the Cowboys beat the Denver Broncos 27-10. White was also a backup in Super Bowl X (1976) and Super Bowl XIII (1979), both of which the Cowboys lost to the Steelers. He did not have any playing time in any of these Super Bowls, and yet, White at No. 15 ranks two spots ahead of Staubauch according to the stats. Why is one in the HOF and not the other? Because Staubach was surrounded by the Super Bowl winning Cowboys of his generation, while White inherited a dynastic team on the decline, once he supplanted Staubach as the starting quarterback.

In part one the question was asked: "At what threshold do we cut off the discussion the top 10, at the 10th place in a list or the top 10 percent? And in terms of defining elitism for quarterbacks, what statistical categories are truly germane to the discussion?"

So, is a quarterback who accumulates the most yards in his career a better quarterback than one who had half as many? Three quarters? Where does the line get drawn by the sabermetricians beyond which are the "elite" quarterbacks, and beneath which are simply "the really good ones" you should only pick for your fantasy team if you have no other choice?

Let's start here. In Part I, Aaron Rodgers was listed as the absolute top performing quarterback since 1970. Here are his stats (click on table to enlarge)

The first number in each metric represents where Rodgers ranks among all quarterbacks; the lower the number, the higher he ranks. The second number represents how many players ranked higher than Rodgers (out of 285 in the Career ranking, 111 in the First 5 Years).

For example, Rodgers passer rating score is 1\0 for both categories; no one ranks higher. For interceptions, Rodgers ranks next to last in the First 5 Years category, 133rd for Career.

This table should suffice to convince you of the argument presented here that the stats for yards or attempts are meaningless: Rodgers career is five years; for the First 5 Year category, he ranks No. 1 in yards, and fifth in attempts, yet when measured against all others over their entire career, he ranks 56th and 73rd respectively, and yet ranks in the top three in each of the four key metrics identified as the most germane for measuring a QB's performance.

So where does everyone else rank? Obviously, below Rodgers, but how far down? Rodgers is like that one kid PaVaSteeler hated in Algebra II; the kid that always scored a 97 on his math tests and ruined the curve for everyone else. To illustrate this, PaVaSteeler measured all 27 of the remaining top 10 percent of quarterbacks from Part 1 in the four key metrics Completion percentage, Yards per Attempt, Touchdown percentage, Passer Rating and calculated how many metrics the remaining quarterbacks ranked as high or higher than 90 percent, 95 percent and 97 percent of Rodgers stats. There are four metrics, so the highest number each remaining player could achieve is four for each percentage.

Again, the sabermetricians want to quantify a point passed which a player is elite; what is the cutoff? 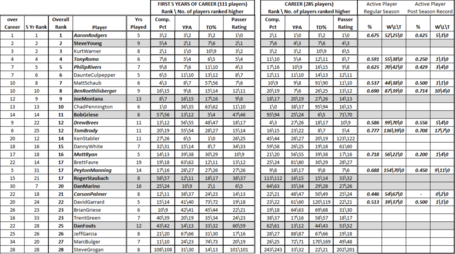 And here are the results of comparing the remaining 27 QBs against Rodgers (click table to enlarge): 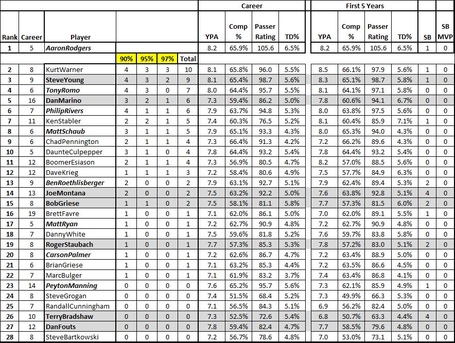 Notice anything? Aside from Kurt Warner and Steve Young swapping places from the original ranking, there are some key names missing. Where's Tom Brady or Drew Brees? If the Sabermetricians' logic holds sway, and that quantification of performance is possible and carries the most weight in determining the status of a player, and since neither of them have stats that come within 3, 5, or 10 percent of Rodgers' measurable performance ratings; does this then make Brady and Brees "un-elite"?

For that matter, where is Eli Manning on either of these lists? And what in the world is Chad Pennington doing ahead of Ben Roethlisberger, Joe Montana, or Terry Bradshaw? And where is Joe Flacco (ranked 37th on the first list, 39th on the second), the most recent winner of the ultimate prize, a Lombardi?

Basically, by using a sledgehammer where a fly swatter should have sufficed, PaVaSteeler hopes yinz get the point. There is far more to what makes a quarterback "elite", than the numbers. Does he have a defense that can keep the other team from scoring? Does he have a running attack to support his passing game? The sabermetricians will tell us that it is just those factors they are trying to quantify to settle this debate.

But how do they quantify Namath's brash egotism and the self-confidence that such egotism gave voice to, just at the right time to capture a national audience's attention and start the Super Bowl down its path to an international event?

And for that matter, how can the sabermetricians quantify Roethlisberger's ability to extend a play time and time again over his career, and thus snatch a Super Bowl victory out of sure defeat in the last couple of minutes, when he played such an average game the previous 56?

PaVaSteeler is not concerned that his theory will be disproven any time soon; he leads a simple life. Aaron Rodgers, by dint of having won a Super Bowl, and by any legitimate standard of measure outperforming all other quarterbacks in the modern NFL era, is an elite player. PaVaSteeler can accept that and sleep at night knowing his team's franchise QB, Big Ben may never be called "elite", because it doesn't matter. Roethlisberger and the Steelers play football the way PaVaSteeler believes it should be played, and they're highly successful at it. When the 2013 season rolls around, PaVaSteeler will be cheering, cursing, rejoicing or complaining as loud as anyone, because after all, isn't that really what watching football should be all about? Enjoying it for the athletic prowess displayed, the drama, the last minute heartbreaks or near miraculous comebacks?

Does everything have to be quantified to be enjoyed? Don't count on it.