Antonio Brown was on ESPN's First Take with Stephen A. Smith recently wearing a hat that appears to be one Al Czervik was referring to in Caddyshack. He spoke about the team a bit, too, but the message was lost in the contrast of tan-gold off the gray of his suit.

Share All sharing options for: Steelers Antonio Brown on First Take, talks Steelers, looks for a free bowl of soup 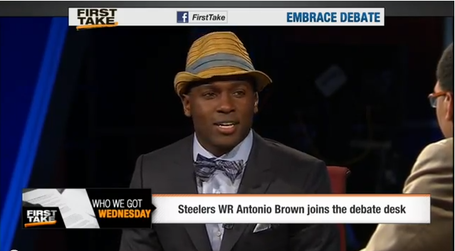 Steelers wide receiver Antonio Brown appeared on ESPN's First Take with Stephen A. Smith recently, and the words he spoke were outweighed by the ghastly hat he chose to wear.

As Al Czervik said, "this is the worst lookin' hat I ever saw. I betcha if you buy a hat like that you get a free bowl of soup! Oh, it looks great on YOU though!"

As for the show itself, Stephen A. seems personally offended why the Steelers finished 8-8 and missed the playoffs.

"A lot of guys changed in our locker room," Brown said. "We gotta get better as a whole. We gotta carry that legacy-"

At this point, Smith cuts Brown off with 14 "STOP!" calls in a row. He didn't let Brown off the hook, and perhaps he shouldn't have. He brought up an alleged "fractured atmosphere" in the Steelers locker room in wake of accusations against LaMarr Woodley in regards to his conditioning.

"Guys (weren't) really together last year," Brown responded. "For guys to throw a guy like LaMarr Woodley, a Pro Bowl player, under the bus, just shows you the men we had in the locker room and that's going to be something we fix in 2013."

Brown disagreed with the notion Woodley was out of shape, and said he considered Woodley his brother. Smith makes a fair point (and one that didn't require me to turn the volume down), Woodley had a hamstring injury, making it difficult to get that high-level, weight-cutting cardio work in.

It's unclear how long Woodley had the hamstring injury, but judging by the way he looked even in the preseason, he's had it for roughly the last 15 months.

As for Brown, he called out whomever it was who mentioned Woodley's conditioning, saying more of the problem is the anonymity as opposed to the message.

Brown's comments, and his hat, make sure people notice it's him speaking and that he stands by his words.

Maybe we'll see more of that from now on.