The plural in the title isn’t a typo—the award in question was presented to Steelers head coach Mike Tomlin and his wife Kiya.

A small item on Steelers.com caught my eye the other day, but I didn’t have time to write about it. I noticed it again today, and also noticed it hasn’t been mentioned so far as I know on BTSC, so I’m jumping into the breach. This isn’t an award likely to garner the Tomlins national attention, but it is an important award nonetheless. You can read the article here.

The award is the Career Achievement in Leadership Diversity and Community Service Award, given by the Chuck Cooper Foundation. As Teresa Varley of Steelers.com noted:

The Foundation’s goal is to help further the education of students in the Pittsburgh area, something that is a passion for the Tomlin family as well.

So who is Chuck Cooper? I certainly didn't know, but he turns out to be a very interesting man.

He was a professional basketball player who hailed from Pittsburgh, and returned to Pittsburgh at some point before he died. As the Wikipedia article states,

Cooper is one of three players with legitimate claims to be the first African American basketball player in the NBA. Each satisfied a different condition of being "first".

In Cooper’s case, he was the first to be drafted by an NBA team. The Celtics drafted him in 1950. Another article about Cooper quotes his wife Irva:

I think that even though he was the first trailblazer, I don't think he enjoyed that experience. I think it was painful, and nobody likes pain.

Cooper played for West Virginia University for a semester after graduating from Westinghouse High School, but then enlisted in the Navy in 1944. After a one-year tour of duty he returned to Pittsburgh and finished his education at Duquesne University, graduating with a degree in education. He was a standout on the men’s basketball team, and although he encountered some hostility from opposing players, Duquesne University supported him, even to the point of canceling games with Southern schools who objected.

He joined the Harlem Globetrotters and garnered enough attention so the Celtics’ owner Walter Brown drafted him in the second round. As noted in the answers.com article quoted earlier:

When an associate pointed out that Cooper was black, Brown answered that (according to the HoopHall: Basketball Hall of Fame Web site) he didn't care whether Cooper was "striped, plaid, or polka dot."

Cooper also played for the Milwaukee Hawks and the Fort Wayne Pistons before leaving the league. As the answers.com article continues:

Cooper's life after basketball was notable for his level of commitment to social activism and for his resolutely maintained distance from the basketball world. He...enrolled in social work classes at the University of Minnesota and earned a master's degree in 1961.

Returning to Pittsburgh, he worked for and eventually rose to the position of director in several neighborhood antipoverty organizations. He was named head of the city's parks and recreation department in 1970, becoming Pittsburgh's first black department director. Later he moved into an urban affairs post at Pittsburgh National Bank, where he spearheaded development and affirmative action programs. Pittsburgh residents of the 1970s and 1980s knew Chuck Cooper mostly as a member of numerous high-profile boards and civic organizations. He was inducted into the Pennsylvania Sports Hall of Fame in 1974, and in 1983 Duquesne established a Chuck Cooper Award to honor talented basketball underclassmen. The basketball career of the player who blazed the way for all the sport's numerous African-American stars, however, was largely forgotten when he died of liver cancer on May 2, 1984, in Pittsburgh.

The Chuck Cooper Foundation was formed to honor Cooper. Their mission statement is as follows:

Cooper was clearly an impressive man, and it is an honor for the Tomlins to be recognized. Kiya Tomlin accepted the award, as the annual luncheon, held on Black History day, occurred after Coach Tomin had left for the Combine. In typical fashion, Tomlin told Teresa Varley:

[W]e just feel like we are doing what we are called to do. We are greatly blessed personally and professionally and giving back goes with that...We want to help [make the city and the educational system better] not only for myself living and working here, but we are the parents of three kids and Pittsburgh is a significant portion of their upbringing. As members of the community it’s our job to make it the very best that we can make it for them and others. 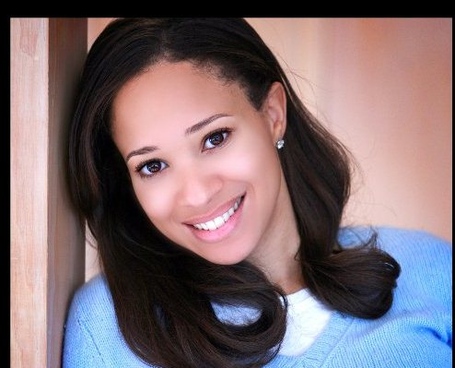 Kiya Tomlin, co-recipient of the award, is a designer of women’s wear with a studio in Pittsburgh’s East End. The photo is taken from her website.

She attended William and Mary on a full scholarship (gymnastics) and was a pre-med student. At the time, she viewed her interest in fashion and dress-making as a hobby. In an interview with CBS Pittsburgh she talked about Coach Tomlin:

He is very supportive. He doesn’t pretend to know if it’s good or not," she said.

"We went out to a charity event one night and the attire was artsy chic, so I had on this red dress, it was a tent dress and it was short, long sleeves and it had a hood.

This quote tells me all I need to know about Coach Tomlin. If he can navigate the tricky shoals of marriage this well, dealing with football players should be child’s play for him. After reading this, I officially consider anyone who thinks he has lost the locker room to be out of their mind.

In the interview, posted last June, she also noted her feelings about Pittsburgh:

This is our third NFL team and I’ve never seen anything like it. It’s a really cool experience.

While looking for information about her I ran across this video, made when she spoke to students at a Western PA high school about how to dress appropriately for how you wish to be perceived. She began the talk in sweats and stripped down to an outfit which would send a different message as she spoke. I know you all want to see it now : ) She certainly got the students' attention.

Here's a lovely quote from an interview with Pittsburgh Urban Media.com:

KT: Aside from a pair of pajama bottoms and a poorly made button down shirt about 15 years ago, no. My husband did love the pants and keeps asking me to make him another pair. He is also waiting for me to mend a bunch of clothes, too. I tell him I don't do alterations. As for the kids, they grow so fast it's not worth the time. Occasionally I'll design a dress for my daughter, but she is 6 years old and has a fashion sense all her own. She thinks pink cowgirl boots go with everything.

Congratulations to the Tomlins, and thank you to them for their work in the community. I am, however, left with one lingering regret after researching for this article. After learning more about Kiya Tomlin, I only wish she had been consulted about the throwbacks...