Steelers 2013 salary cap options: The end of an era

The big game is upon us celebrating not only the coronation of a new champion, but the official end to the 2012 NFL season. Brace yourselves. The off-season is here.

Share All sharing options for: Steelers 2013 salary cap options: The end of an era

Apocalyptomaniacs worldwide believed the ancient Mayan prophecies, which signaled the end of an era in human history on December 21, 2012, meant the end of the world was nigh.

Maybe the Mayans were really just Pittsburgh Steelers fans attempting to warn us of what lied ahead.

Granted, a case could be made for an inaccuracy to the specific date, as the Steelers transitioned into a new era of its storied past on Dec 23rd - the day any playoff aspirations for Pittsburgh died at the hands of the Cincinnati Bengals on Heinz Field in Week 16. However, said loss carried more weight than just a missed post-season appearance. It signaled the apex of the bridge crossing a generational gap.

The arc of exodus began following 2011- one season removed from a Super Bowl appearance - when modern legends Aaron Smith, Hines Ward and James Farrior were denied any more opportunities to help the Steelers add to their trophy case, while adding to their own personal ring counts.

This bridge is beginning to shape up as a three-year span, with more decorated veterans scheduled for discharge in 2012; and most likely the last to leave following 2013. Their releases and retirements have little to do with the team not needing their talents any more if they were healthy enough to participate. It's more about advancing age, decreasing health and NFL salary caps preventing the team from hanging on to fan favorites and team leaders.

As our positional exploration of all options regarding each player and their salary cap implications concludes, we will review our situation and all other relevant information - tools needed as we prepare to enter the next phase of this series, as the Steelers enter a new era of their history.

We've projected potential restructures, new deals and draft picks; but let's rewind and take a look at the players currently under contract with Pittsburgh. 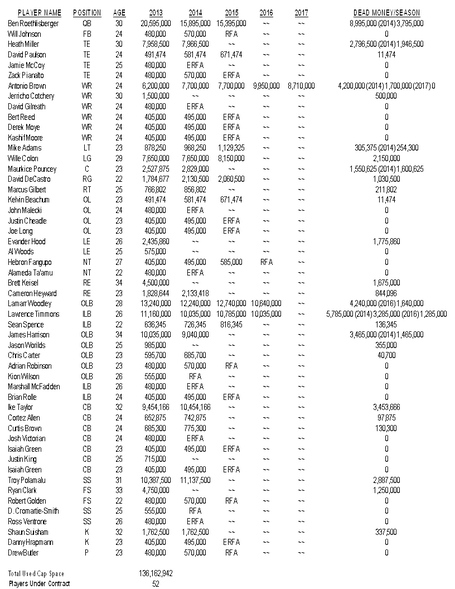 First, we examined the three most likely restructures of the off-season: Ben Roethlisberger, LaMarr Woodley and Lawrence Timmons. The actual total saved against the cap will be determined by the amounts the Steelers wind up moving. We established nearly-maximum restructures as examples, saving a total of $16 million against the NFL salary cap which is estimated to be at or slightly below $121 million dollars.

Next, we signaled the remaining top salaries on the roster whose employment with the team remain on the bubble. We discussed the possible options in each scenario in each player's respective positional group, postponing any verdicts and speculations until after the Super Bowl, in case of any immediate moves by the team following. This list includes the following players: James Harrison, Ike Taylor, Troy Polamalu, Ryan Clark, Brett Keisel, Heath Miller, Willie Colon and Shaun Suisham.

Baron Batch and DeMarcus Van Dyke are Exclusive Rights Free-Agents, which are players with less than three accrued seasons whose contracts have expired naturally. ERFA tender levels are decided by the players number of accrued seasons, and are reported as following:

Jonathan Dwyer, Isaac Redman, Emmanuel Sanders, Steve McLendon and Stevenson Sylvester are all scheduled to be Restricted Free-Agents. We established arguments behind which players would receive each level's tender in their positional group review. Each level requires different compensation should another team make an offer to a RFA.

Pittsburgh has multiple players scheduled to become Unrestricted Free-Agents. We've discussed potential dismissals like Mike Wallace and Rashard Mendenhall, but we did establish some budgets for a few possible re-signings, including: a veteran backup quarterback which could come from outside the organization, but designated as Byron Leftwich for now; one of the three veteran offensive linemen Max Starks, Doug Legursky or Ramon Foster should they find few offers in free agency; and future top corner Keenan Lewis. Larry Foote is listed at an amount equal to Sylvester's tender amount. The could decide to part ways with Sylvester and offer the same amount to Foote if paying for only one season. Our budgets were modest, with Lewis garnering the largest offer: 5 years, $35 million with a $15 million signing bonus.

Last, but not least, we established budgets for eventual draft picks. Pittsburgh will select 17th in the 2013 NFL Draft. While actual contract terms will be set through player negotiations, we set placeholders by using the contracts of the 16th selections in each round of the draft plus the $15,000 increase in minimum base salaries from 2012 to 2013. Draft pick placements by position were decided through reader's polls throughout this series, however these will only be determined on draft day.

The last two numbers we need to keep in mind are cap rollover and cap penalties.

At the end of an NFL season, teams are allowed to rollover any unused cap space to the following season as a credit. As reported by John Clayton of ESPN, the Steelers will have a credit of $758,000.

Penalties are the residual dead monies of released players. Dead money are cap-related designations which represent portions of a player's salary received upon the signing of their contract as a bonus. These bonuses, while already in possession of the player, are prorated proportionately along the first five years of the contract to avoid massive cap hits in initial seasons. Most releases accelerate dead money penalties into the season of the release, however some conditions allow the team to split dead money between the current season and the following. We saw an example of this with Baron Batch, who was released earlier this season and eventually re-signed.

Batch had received a signing bonus and had three years left on his contract when he was cut the first time. The team took one seasons worth of dead money in 2012, and pushed the other two seasons into 2013. Current reports estimate the dead money penalty to equal $597,291 - including the declared impending release of Chris Rainey. This figure is held against the team's cap figure like a contract cap hit, although it is basically negated by the rollover credit. This penalty figure is sure to increase by the time final cuts have been made in preparation for the season opener.

This concludes our review, ending the positional era of this series. However - like the Steelers themselves - we now enter the next phase - actually getting the team under the cap. With all the numbers presented here, the roster would hold over 60 players with a team salary cap hit of about $156.5 million -- approximately $35.5 million over the projected limit.

We designated bubble players who may be released to significant cap space, but as has been said - the Steelers are married to no one. Here is a breakdown of cap savings for every player currently under contract if released, based on current year accelerations only. 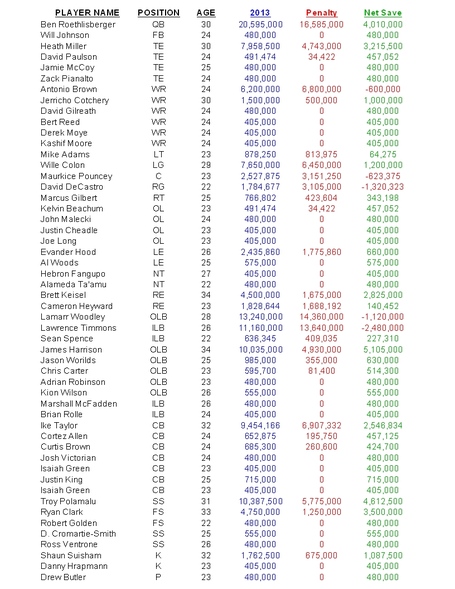 As Pittsburgh sets out upon the path to $116 Million which is a relatively realistic target for which the front office may aim, so shall we. Through the next leg of this series, we will explore different possible scenarios which we may see as GM Kevin Colbert and President of football and business operations Omar Khan begin working their magic, including manipulations of bubble player contracts and projected releases.

In preparations for our next step, a new reader poll asks which potential free-agent is considered the most necessary for re-signing. When making your decision, keep in mind the contract situations involving other players at the same position and the necessity for their return based upon their potential asking price.