Mocking the Steelers roster: Out with the old

As the AFC North unanimously celebrates the retirement of a legendary linebacker, two more of its defensive legends may be forced to do the same without the confetti, champagne and controversy.

Share All sharing options for: Mocking the Steelers roster: Out with the old

All criminal inquiries and derogatory rival spite aside, the retirement of Baltimore Ravens linebacker Ray Lewis was a significant moment in the history of the NFL, because his exit has put the rest of his generation on notice - it doesn't last forever.

While his statistical record and locker-room leadership will make strong debates for the legitimacy of his candidacy for the Hall-of-Fame when he becomes eligible five years from now, it is his age and tenure which make him a legend by NFL standards. Few players mean to their teams what Lewis meant to Baltimore, but even fewer get to play professional football as long as he did - let alone for the same team as a starter.

Recently, Antonio Brown spoke about a personal desire to end his career with the Pittsburgh Steelers. For a player entering only his fourth season, his comments shed a little light on the current machine the new CBA has created. NFL contracts used to be all over the place, as high draft-picks and free-agents pushed the market to its breaking point. With the new CBA in place, we're about to see a change in the mentality of contract negotiators on both sides of every deal.

Rookie contracts are now four-year deals without tender restrictions, like the situation involving Mike Wallace, who refused to sign the restricted free-agency tender offered by the Steelers which he was bound to by the structure of his rookie contract, which was signed prior to the installation of the new CBA. Wallace would not have benefited financially from the new system, outside of the possibility he would not have held out had he still been under contract.

The four-year rookie deals have essentially dictated three levels of the average NFL career. First, you get drafted or sign as an undrafted free-agent, which still become RFAs in the fourth years of their initial contracts. If a player survives his entire rookie deal, he is either a reserve or a starter. In either case, they will most likely enter the second phase of the NFL career which lasts three-to-five years. If the player was a reserve, it is unlikely they reach the third level, which is reserved for established starters. The third level has become the retirement contract. There is no definite ceiling, as each player is different; but it does mean the career is nearing its end.

If the average third-level career lasts 12 seasons and the average player enters the league at the age of 22, this projects the expected retirement age of 34 years old for the average player. Men who play to this age or longer, are never average players. Charlie Batch, Charles Woodson and Champ Bailey are in select company with Lewis as players to exceed the stereotype - but of course, they are all leftovers from the old regime.

In this new salary cap era, no player is expected to play so long. When fourth-year players exhibit a sincere cognizance of their career as a whole, evidently they aren't expecting to play so long, either. While players like Lewis leave the game on their own terms, most others are forced to exit for medical or financial reasons. The Steelers are hurting for cap money, and may have to forcibly retire a few of their own, only without the same pomp and circumstance Lewis was afforded.

In this space, we've explored the current and potential contract situations with each positional group. Now, the focus of this series will turn toward exposing the various scenarios which could dictate the final roster, as the team attempts to comply with the salary cap. The cap has been projected to be near $121 million, however for these discussions we will aim for a range of $115-$118 million.

In our positional exploration, reader's polls placed draft selections which resulted in some other projected moves. We will pick up where we left off in our next installment. With retirement of tenured veterans becoming a relevant topic thanks to Lewis, we will take a look at how retirement may end up affecting the make-up of the 2013 roster.

We've already presented the possible cap savings created by releasing each player. Coincidentally, the players whose releases would save the most space, are the same players we placed on our bubble list in our previous discussions - with the exception of Jerricho Cotchery, whose release would save one million dollars against the cap, but experience will be needed if Wallace leaves in free-agency as expected.

The player whose release saves the most cap space, is also the oldest player currently under contract with the team. This scenario begins with the retirement of James Harrison.

The Steelers have a strict best-player-available philosophy when it comes to the NFL draft. Most people feel the best player available in 2013 will be a pass-rushing outside linebacker. If so, Harrison would become the first target for cap clearance. Pittsburgh isn't known for starting rookies, but they really have little choice. In an off-season desperately needing cap space, he provides the most.

Also in this scenario, we see the involuntary retirement of fellow-34-year-old defensive end Brett Keisel. Arguably, both Keisel and Harrison still possess the ability to play at a high level; however this series is examining cap position. We will explore multiple scenarios where both players remain on the roster, but for this case they do not. Harrison's release would result in a cap penalty of $4.93 million, and Keisel's would hit for $1.675 million.

In this scenario, several other assumptions were made, including: the restructures of Ben Roethlisberger, LaMarr Woodley and Lawrence Timmons; the reallocation of draft-picks and the finagling of two other contracts on our bubble list - Troy Polamalu and Heath Miller. Both players received similar treatment, however each move would be made with different intentions.

In each case, a two-year extension was offered to the player. Miller is offered six million dollars in base salary in each extra season; he is scheduled for base salaries of slightly over five million in 2013 and six million in 2014. With the extension in place, four million of his 2013 base salary are restructured into a signing bonus creating one million dollar dead money hits in each of his four remaining season. This saves three million against 2013's cap, while locking up the most important piece of the offense for the remainder of his career.

Polamalu saw the exact same action taken with his salary, however the intentions with his would be the opposite. The team will want him to finish his career here - in 2014 like he was supposed to. Offering him an extension gives somewhere to restructure part of his scheduled $7.5 million base salary for 2013; it also gives the same opportunity in 2014 should he remain healthy and productive. Unfortunately, Polamalu doesn't sound like a man desperate to linger in the league, and his time will come to an end eventually. The Steelers can deal with dead money penalties in 2015 should he retire, while still saving money against their overall cap figure. 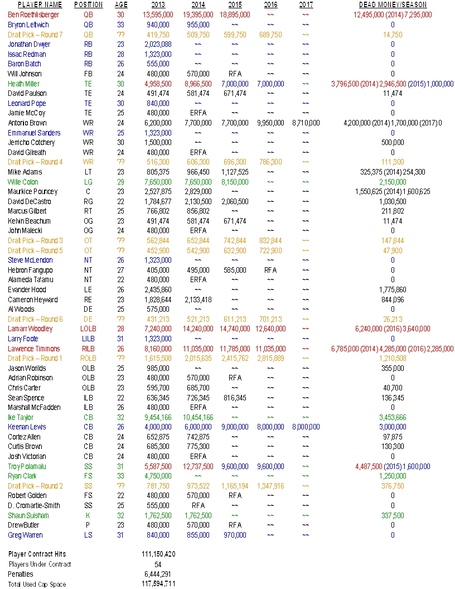 The penalties listed include the releases of Harrison, Keisel and Rainey; but it also includes the $758k rollover credit from 2012. At slightly under $118 million, we hit our target range. We only had to part ways with two modern legends who still wanted to play.

This off-season will be a tough one, as the team will be unable to keep everyone. Someone's favorite player will not be in Pittsburgh for 2013. These posts will continue to present scenarios such as this, to show how individual acts like one draft selection can force the team's hand as far as who becomes the cap casualty.

In this scenario, Harrison was forced into retirement because another pass-rushing linebacker was drafted for his position, making Harrison expendable; however, even if the team does select such a linebacker, they may choose to pursue other actions in an effort to keep Harrison, too. In the poll below, voice your opinion on this decision, should this be the case.