Mocking the Steelers roster: In with the new

Restructuring contracts, releasing veterans and re-signing free-agents sounds great when getting your team under the cap; but the impact on future seasons is undeniable.

Share All sharing options for: Mocking the Steelers roster: In with the new

The problem with cutting corners is, eventually, everything comes full circle.

This is the real problem facing the front office of the Pittsburgh Steelers organization - the karmic repercussions of cutting corners to squeeze championship rosters under the NFL salary cap.

The term "restructure" has been used far too loosely in the recent future. It became a necessity after ring-bearing veterans received their due, only to continue to draft players who would either warrant the same financial recognition, or fail to progress enough during their first tour of duty to make a clear evaluation for the sake of negotiation.

The danger in restructuring contracts lies in the breaking of one of the oldest rules in the book: "Never put off until tomorrow what you're supposed to do today, because you never know what tomorrow brings". This team's tomorrow brought a couple 1,000 yard receivers, some serious depth at cornerback and a ticking time-bomb.

Restructuring is so popular because it gives a team cap space in their current season, and it gives the player what they really want - their money. Cap rules allow a team to take most of a player's base salary in the current year and convert it into a signing bonus.

This converted money is paid to the player when they agree to the restructure, essentially paying the employee in advance for his season's efforts. The unconverted base salary is still paid out to the player on regular paydays. The team is gambling on the player's health, but they benefit by deducting the converted amount from the cap ledger, and divide its hit evenly across the remaining seasons on the players contract.

You'll never hear a player complain about being asked to restructure his contract. A common misconception among fans involves a player's restructuring of their deal being some token of their loyalty to their particular organization. This is bonk. Who wouldn't want to received their annual salary up front? Get sick and need to miss work? Who cares? You already got paid.

This is the bet bankrupting the Steelers.

While many human beings would abuse their position of having received their wages prematurely, players have not necessarily been guilty of this sin. They really have been unable to work, however the consequences left for the team to pay are still the same. Players like Ben Roethlisberger, LaMarr Woodley and James Harrison have all restructured contracts only to miss snaps during crucial times.

The second side of the restructuring coin represents those remaining years on the restructured player's contract. When highly paid veterans miss majority portions of regular seasons and post-season appearances, the team must not only replace the injured starter, but continue to count their enormous salary against the cap while doing so. When the injured player returns, his cap hit for the following years draw scrutiny and skepticism due to uncertainties about the player's health in those seasons. If they can't play, why do we pay?

Unfortunately, salary cap regulations prohibit a team from paying a player out of heart-felt loyalty; especially, if the player has restructured his deal at some point. It's one thing for a team to be unable to afford a large base salary, but when signing bonuses and restructured salaries get pushed into future years, those designations can never be moved. Releasing a player may subtract their base salary from the cap ledger, but those advances still count. This is why these bonuses are called dead money.

When we restructure contracts, we are guaranteeing their pay, receiving no guarantees in return. Based on several comments by general manager Kevin Colbert, the team has learned its lesson, and is no longer marrying itself to anyone. Loss is always difficult, but it is inevitable. The Steelers seem to be psyching themselves up, preparing to bite the bullet and get it over with as quickly as possible; without allowing the empty holes to become infected and decay.

In our positional explorations, we described possible scenarios including the restructures of Lawrence Timmons, Woodley and Roethlisberger. There are other players on the roster who are also eligible for restructures, but the team will do as little of this as possible. Timmons and Woodley still have four years remaining on their contracts, both laden with heavy pockets of dead money. While restructuring increases the last three years of their deals, each season's extra cap hit would be least detrimental because of the length of their deals.

Roethlisberger only has three seasons left on his contract. His $11.6 million base salary for this year inflates to $20 million when including his dead money. The Steelers will continue to live vicariously through their franchise QB, meaning they are willing to pay as much as required to keep him on the roster. His restructure is almost guaranteed, although his may include a twist.

BTSC editor Neal Coolong made a strong argument for Roethlisberger to receive an extension this year, which would not only lock him up through the remainder of his expected career, but also provide extra seasons to spread his 2013 salary across when he does restructure his contract, reducing each respective seasons resulting cap hit. This would definitely be in the team's best interests, and I agree wholeheartedly with every facet of Mr. Coolong's plea. We only differ on the date.

We began an experiment in our last installment, Out with the old. We simulated the releases/retirements of James Harrison and Brett Keisel. We performed similar tactics as described in Roethlisberger's case, with Troy Polamalu and Heath Miller. We gave each of them two-year extensions, and then restructured their 2013 salaries. We got under the cap, finishing slightly under $118 million including penalties and rollover credits.

Our restructures of Roethlisberger, Woodley and Timmons saved us the most cap room in 2013, but do nothing but harm after. Roethlisberger's remaining two seasons inflated to nearly $20 million in each year. Woodley's neared $15 million, and Timmons topped $11 million. Polamalu and Miller saw their cap hits for 2014 jump as well.

Here's where we left off, although I've taken the liberty to add the final numbers for 2014 and 2015 as well: 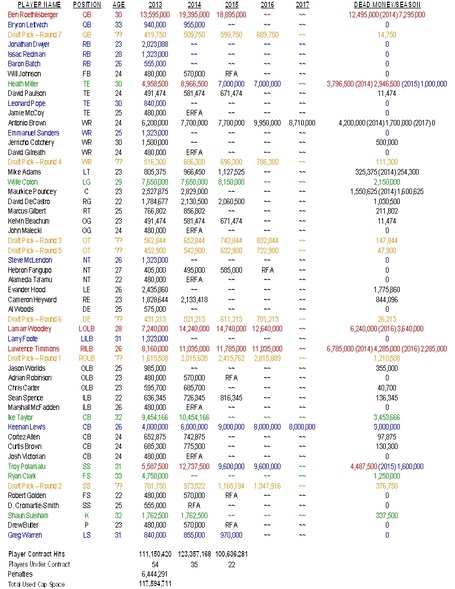 Restructuring contracts is dangerous, but it is not impossible to recover from. In fact, the team will not completely outlaw this technique. As young starters reach the end of their rookie contracts, they will require significant offers to remain with the team. However, future restructures will never again be allowed to carry the weight they have so far.

To provide an example of how the team can climb out of the hole they dug for themselves, I continued this simulation through the next few seasons. Of course, several assumptions had to be made.

The first assumption involves the team not suffering the multitude of injuries sustained in 2012. If the Steelers can maintain their cap clearance, they can again roll it over into the following season as a credit. With slightly over $3 million in breathing room, I assumed half could be rolled over.

I had to project contracts for the following players who became free-agents as the simulation progressed to 2014:

I also included budgets for five ERFA's ($575k each) and one RFA ($1.4 million); and seven more draft picks at the same budgets we used for 2013. Hopefully, the Steelers will be drafting lower in 2014, making these budgets a bit over-estimated.

The only cut I made was Ike Taylor, who was in the final year of his deal in 2014. I absorbed his entire dead money penalty, which would result from a release or trade. I prevented myself from restructuring Woodley and Timmons again, but I did rework the contracts of Antonio Brown, Polamalu and Roethlisberger.

This is the year I expect to see Roethlisberger to receive an extension. He may not be willing to sign one in 2013 as the team undergoes an offensive transformation. If everything goes well in 2013, he may be more susceptible to finishing his career in Pittsburgh. Giving him a three-year extension now, allows the most years to spread the largest salary of his contract - $12.1 million in 2014. Each extended year is set at $12 million per season. Should he decide to retire at any point during those three years, the team would only save cap space even though this scenario involves one final restructure in 2015.

Here's where I wound up, with adjusted final numbers for 2015: 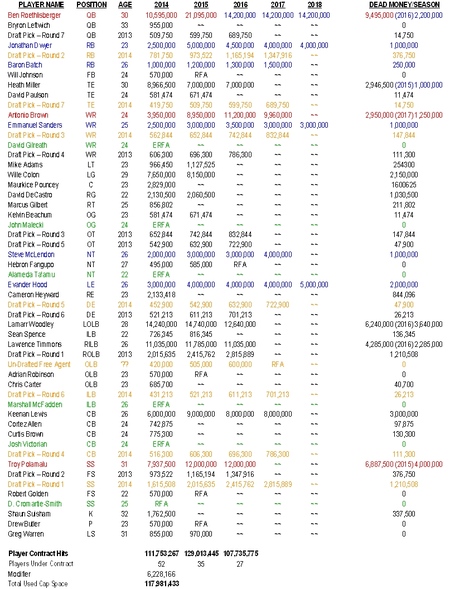 Moving into 2015, we find the retirement of Polamalu. I took his entire dead money penalty in 2015, although for a hit of this magnitude I would expect a post-June departure allowing the team to split his penalty between 2015 and 2016. We also say goodbye to Willie Colon, whose contract I did not touch up until now.

I again only took half of the expected cap clearance from 2014 and applied it forward, for a discount of $2 million. I added another round of draft picks, some contract estimates and reworked some other deals. Timmons and Woodley received extensions to permit the restructuring process, although I see Woodly becoming a cap casualty before the expiration of his deal. Antonio Brown would be auditioning for an extension of his own in 2015. If he has lived up to the team's hopes, he could be offered an extension following 2015, giving plenty of room to restructure his deal again. 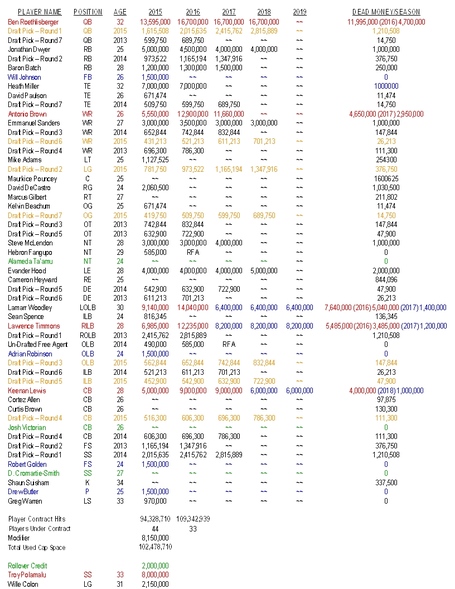 Considering our cap figure is at least $20 million below prematurely estimated cap levels, the team should have enough money to re-sign most of their nine free-agents, which include Cortez Allen and Curtis Brown, Maurkice Pouncey and Marcus Gilbert, and Cameron Heyward.

The reader may draw their own conclusions as the whether this scenario was successful or not. We managed to get below the cap each season, with little room to doubt in years beyond. Eventual departures of Roethlisberger, Heath Miller and Woodley, will provide extra breathing room as the team continues to level the dive-planes. However, no matter how hard they try, the Steelers will not be able to completely escape the contract restructuring ways which led to the difficult situation they're in now - but even in our simulation here, we've shown it is possible to work one's way out of it.

In our next installment, we'll return to our reader's poll determined scenario. This time, the poll asks your opinion on a name who has had cases made to both keep, and release him this off-season. What do you think should be done with Willie Colon?