Sanders is a restricted free-agent in a year he is expected to be a co-starter at receiver. On Thursday, he officially added another reason to why he needs to have a breakout year.

Share All sharing options for: Steelers Emmanuel Sanders gets engaged

Steelers wide receiver Emmanuel Sanders has a reason to work for a breakout year in 2013 - his final season before hitting unrestricted free agency. 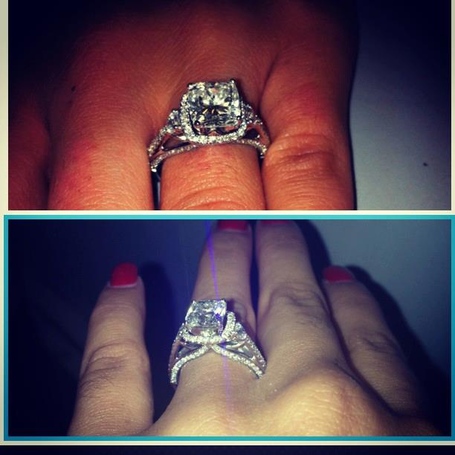 Sanders announced his engagement via Facebook Thursday, and the ring he gave his future wife is impressive.

Whether it could have been $15,000 more expensive remains to be seen, however.

What's clear, outside that enormous rock, is it's a big Prove-It year for Sanders.

With Mike Wallace expected to sign elsewhere this off-season, the Pittsburgh Steelers will turn to Sanders and Antonio Brown to lead their offense in 2013.

Brown is expected to perform because of the large contract he signed prior to last season, and because his name is on top of the depth chart where Wallace used to be. Sanders is the second receiver, but is a restricted free-agent this season; meaning he must prove to the organization they need him to remain a co-starter this year.

Sanders has had a slightly disappointing career so far, riddled with injuries and young money crews. When healthy and focused, Sanders has all the tools to be a successful receiver for Ben Roethlisberger. He will need to put those tools to work in 2013, if he wishes to stay with the Steelers. His career is counting on it.

Not to say he couldn't find work as an unrestricted free agent next season, but he is unlikely to find a similar situation to what he's in now. Starting opportunities are few and far between in the NFL. If Sanders can shake the fragile label he has been developing, he could hang on to the starting job which was intended to be his before Brown began to stand out.

However, while each player hopes to hang on to their futures, Sanders will not only need to perform well for himself and his teammates, but now he needs to perform for his family. His future is happening now, and he needs to make the most of his opportunities. It will be up to Sanders to fight through life's distractions, much like fellow teammates Ben Roethlisberger and Jonathan Dwyer, who both became fathers over the past 12 months. Behind the Steel Curtain would like to congratulate Sanders and his wife-to-be on their eventual wedded bliss.