Steelers current economic challenges are due to the draft, not restructuring contracts of veterans

It's not rocket surgery; the Steelers wouldn't have to restructure the contracts of veterans if they have less expensive alternatives in place. They don't because they haven't drafted them. And the size of contracts being given to quarterbacks is a league-wide phenomena only avoided by teams that do not have franchise quarterbacks.

Share All sharing options for: Steelers current economic challenges are due to the draft, not restructuring contracts of veterans

Tribune-Review reporter Mark Kaboly does an outstanding job with a feature piece in Sunday's edition regarding the Steelers recent trend of restructuring contracts.

Some interesting points in the feature:

The previous CBA had brought in huge amounts of money for the players, which is what led to a vastly higher salary cap figure than in previous years. Teams had to spend more, and logically, made it harder to reach the cap. Without a cap in 2010, after the owners opted out of the CBA (their collectively bargained right, and one of the main reasons the lockout happened in 2011), the salary cap dropped $3 million from where it had previously been.

Today on BTSC: 'Championship Roster' Mendenhall to Miami? Wallace too?

That pushed the usually fiscally responsible Steelers to the edge of that cap, just as they began to suffer what all teams with the same problem will have to face in the very near future; the ginormous price of a franchise quarterback.

This isn't intended to get into the contract signed by Ravens quarterback Joe Flacco. It's worth mentioning, though, Flacco's $29 million up front can be argued was back pay for last season, when the Ravens made the unprecedented decision of making their starting quarterback play into the last year of his rookie contract despite having started every game in his tenure. He also won a Super Bowl, despite playing without a contract the following season. You better believe he's gonna want to get paid, and he should be.

But while everyone praises Ozzie Newsome for making that deal, and bashes the Steelers for restructuring players often, two things need to be pointed out: 1.) Flacco has a $28 million cap hit in 2015. Roethlisberger has never been within $9 million of that. If you think they aren't restructuring Flacco in 2015, there's something wrong with you. 2.) Roethlisberger accounts for three of the team's 13 restructures in the last three years.

While it's true, as Kaboly's article points out (and is supported by the excellent insight of Andrew Zimbalist, an economics professor at Smith College in Massachusetts), that money gets pushed into future years, but the cap number of your starting quarterback is becoming just a delayed bonus. The cap is not going to increase the way many fans suggest it will, and Baltimore, just like Pittsburgh, and Green Bay, and Atlanta, and the Giants and any other team who signs a quarterback for that market value amount, is likely going to have to ask their quarterback to take a big lump sum in March if they wish to keep other players around.

That's where the financial side of the league is going right now. 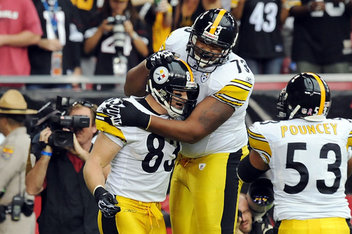 The question is, will he sign somewhere else first?

If Joe Flacco's deal is the highest in the game, what's Aaron Rodgers going to ask for? Flacco plus 20 percent at least. Atlanta's Matt Ryan is going to ask for something similar. If Russell Wilson and Colin Kaepernick (the two are currently poised on the brink of what could be the NFC's two best rivalry games next year) continue doing what they did in 2012, what are they going to ask for, considering they've been paid a fraction of what quarterbacks vastly inferior to them statistically have done?

By 2015, you're going to see a quarter of the league's QBs getting paid around where Flacco is.

It's a vicious circle, and while people can hem and haw as much as they want about how the Steelers have restructured contracts, the fact is, contrary to Andrew Brandt's opinion (he was quoted by Kaboly), the only teams not restructuring right now are the teams without franchise quarterbacks.

It doesn't take an economics professor at Smith College to see what's moving all of this. If Flacco didn't play the way he did in the playoffs, the Ravens do not win a Super Bowl. If Kaepernick didn't create a significant match-up problem for teams on the edge, and lead two ferocious comebacks in the playoffs, the 49ers don't have the ball 1st-and-goal from the Ravens' 6-yard line.

The cap is not going to increase the way many fans suggest it will, and Baltimore, just like Pittsburgh, and Green Bay, and Atlanta, and the Giants and any other team who signs a quarterback for that market value amount, is likely going to have to ask their quarterback to take a big lump sum in March if they wish to keep other players around.

The Steelers restructured a few veterans in the past. Those players, per Kaboly, Roethlisberger three times; Timmons twice; Brown, Heath Miller, Chris Kemoeatu, James Harrison, Brett Keisel, LaMarr Woodley, Ike Taylor, Willie Colon once. These aren't Average Joe Nothing players, and the additional cap hits go only into years in which those players are signed. The real risk comes in releasing those players. Considering five of the 13 releases come from Roethlisberger - who would probably be the last person in the franchise to be cut - and Timmons, who is 27 years old and coming off the best season of his career. Sure, it tacks on a few million between them to future caps, but these are guys the team is and should be committed to for the long term.

They don't have to restructure the Kemoeatus and the Keisels anymore. They've moved past the idea of keeping that nucleus together to make one more championship run. Now, they're in transition. It's just that there are still a few bucks to pay on that.

The team's salary cap issues are not the problem here. Since when did the Steelers go out and sign a bunch of free agents anyway? As Kaboly pointed out, the last big name free agent they signed was Deactivated Duce Staley in 2004.

They restructured those players because the inertia of the last few big contracts they gave out caught up to them, and it wasn't met with an increasing salary cap, which was projected at the time the lockout occurred.

Their lack of ability to find players of that quality in the draft to replace those expensive players when they leave - the way they often have throughout the history of this team during the Salary Cap Era - is what's going to make or break this team's chances of success in the next five years.