In case you missed it over the weekend, here's a run-down of the news associated with the Steelers unrestricted free agents, and the teams from whom those players are getting interest.

Nothing, of course, is official. That's exactly how the league wants it. There's plenty of rumors flying around about which player is talking to which team, and all the bigger named Steelers free agents have been linked somewhere.

James Harrison: Released by the Steelers on Saturday, and his agent is making a whirlwind "he loves your team" tour across the league. It's anyone's guess right now where he'll eventually sign, and for how much, but he's certainly getting his name out there.

Harrison's legacy is defying the odds 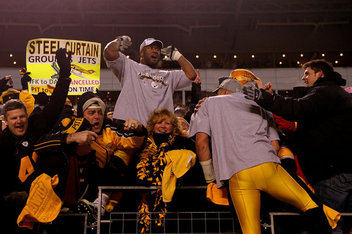 James Harrison's Steelers career came to an end, but his legacy will remain as strong as he is.

Mike Wallace: Thought by some to be the top target in free agency, the wide receiver seems to be all but signed by the Miami Dolphins. Their warm weather and heaps of cash are thought to be the two biggest drawing points the Dolphins are using to lure him to South Beach.

Keenan Lewis: The cornerback has been linked with the Browns, but hasn't been making many waves in the rumor mill. It seems out-of-place to continuously hear Dolphins CB Sean Smith linked to reports of $7-8 million per year offers when Lewis has done more, has more upside and is the more imposing physical specimen of the two.

The suspicion is simply that Lewis's camp isn't making public the conversations the sides are having. If Sean Smith is getting legitimate offers around the $8 million a year mark, so is Lewis. The question is with whom he's discussing, while the possibility still exists he stays in Pittsburgh.

It just looks less likely with each passing hour he's able to talk money with other teams.

Rashard Mendenhall: Looks to be building a bit of a market for his services, and it makes sense. While dogged frequently in Pittsburgh, he's a prime candidate for a change of scenery kind of uptick in production that running backs sometimes have. He played 2012 on a damaged knee, but continued rehabilitation of that knee, and a clean slate somewhere else, could make him one of the more productive free agents of this class.

He's been linked to Miami and Denver is allegedly interested as well.

Ramon Foster: The Steelers have said they would like to make him an offer, but are waiting to see how their financial situation ends up. This could mean they are still involved in contract talks with Lewis (the one free agent the team seemed intent on signing), or they're simply waiting to see how the market plays out for Foster.

Casey Hampton: Nothing has been said of the veteran as of now, but the older veterans are not often the players teams seek out on Day 1 of free agency. No word has been said whether the Steelers will bring Hampton back, but the fact the team retained Steve McLendon via restricted free agency could play a part in whether Hampton will return.

Be sure to check out all the Steelers free agency news and commentary here on BTSC, and stick around for the latest updates as they happen.