Despite the pleading of a very intelligent and rational BTSC writer, many expected the Steelers to cut their eldest offensive lineman. Colon never sweated it, and he had every right to.

Evidently, the Pittsburgh Steelers disagreed with the popular consensus surrounding the future of Willie Colon; or at least, his present future.

Many in the media and the team's fan-base believed Colon fell into the lowest percentile of Pittsburgh's personnel prioritization after prematurely ending his third consecutive season on injured reserve, although all three incidents were unrelated.

James Harrison, who was expected to be much higher on the team's list, saved the team four times as much cap space as a Colon release would have. The team tried to renogotiate Harrison's base salary for 2013 into a reported 30% pay decrease, which he evidently declined, forcing the team to release him for the sake of affording the future.

Part of this future is evident in the suddenly young and talented offensive line, built through early round draft picks; but the team has no experience under contract. Max Starks, Ramon Foster and Doug Legursky are scheduled to become free agents. The only member of the trio to be connected to a return has been Foster, but even he will have to wait until late in free agency to receive a competing offer from the Steelers, who he has gone on record as wanting to continue his career, no matter his role.

Marcus Gilbert and Mike Adams are expected to hold down the perimeter of the fort, while David DeCastro and Maurkice Pouncey secure two-thirds of the interior. Of the four projected starters, Pouncey is the most experienced entering his fourth NFL season, outside of Colon. Unless the team re-signs one of their UFAs, the most seasoned veteran backup would be Kelvin Beachum, a 7th-round draft pick in 2012 who was forced to start several games at tackle after injuries to Gilbert and Adams.

Despite talk of scheme changes with a new offensive line coach, Colon is the veteran voice of the positional group. He was the inspirator of a suffocating running game in early 2012. The young starters will need Colon to light the fire again with Rashard Mendenhall expected to leave, leaving the ball in the hands of recently tendered RFAs Jonathan Dwyer and Isaac Redman.

In the end, Pittsburgh understood the reality of the situation, and realized Colon's experience was more valuable to the team's future than an outside linebacker nearing the end of his career. This explains why the team is willing to honor his $5.5 million base salary, but was unwilling to handle Harrison's at only a million more. While Colon was viewed as dead weight at the end of 2012, it was Harrison's dead money which proved the true detriment to the team.

The team could still find a new future left guard in the upcoming NFL draft, which would force the team to re-examine Colon's situation. Releasing him after June 1st would charge half of his salary cap penalty to 2014, expounding the $1.2 million saved by releasing him before; but with a possible opportunity for early draft picks to play sooner at other positions like outside linebacker, Colon affords the team to postpone addressing the offensive line again until next year, or possibly 2015 should he excel as a full season starter at his new inside position - and Terrell Suggs start playing like a grown man and give up the cheap shots. 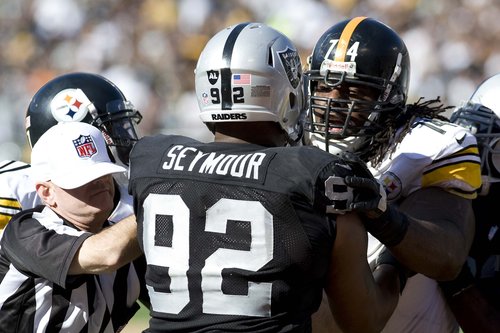 That's right - Colon was once a star defensive tackle.

While the future will simply have to play itself out, Colon can rest easy for now as he continues to rehabilitate his knee; although not too easy, as he will be expected to carry the young line through the growing pains. Like it or not, Colon is an integral part of his team, whether he is asked to play tackle or guard. And even if the team does draft a replacement, Colon is versatile and flexible enough to still warrant his roster spot and his contract. Personally, I still think he'd make a great defensive tackle.