The father of modern NFL draft analysis Mel Kiper jr. has thrown a monkey wrench so to speak into the draft speculation of Steelers fans everywhere by proclaiming that the Steelers will select Notre Dame tight end Tyler Eifert in the first round of the 2013 NFL draft.

Here's what Kiper had to say about the pick:

"Mike Wallace might be exiting, but in Eifert the Steelers add a different kind of matchup headache for defenses. Eifert has the speed to stretch the seam and also develop routes to the edges, and can't be effectively covered by anybody. He's too tall for corners and safeties, too fast for linebackers."

It's quite an interesting scenario to say the least and one that Steelers fans should consider instead of balking at. In his mock draft all of the usual suspects are gone. Ezekiel Ansah to the Lions, Dion Jordan to the Browns, Jarvis Jones to the Bills, Mingo to the Jets, and Cooper to the Titans. The only player out of the handful that have been linked to the Steelers that would be available is Alabama guard Chance Warmack.

So from the Kiper analysis the question begs, could the Steelers use a Jimmy Graham/Rob Gronkowski type to create nightmare matchups across the middle of the field? Also, do they need another tight end with Heath Miller on the roster? 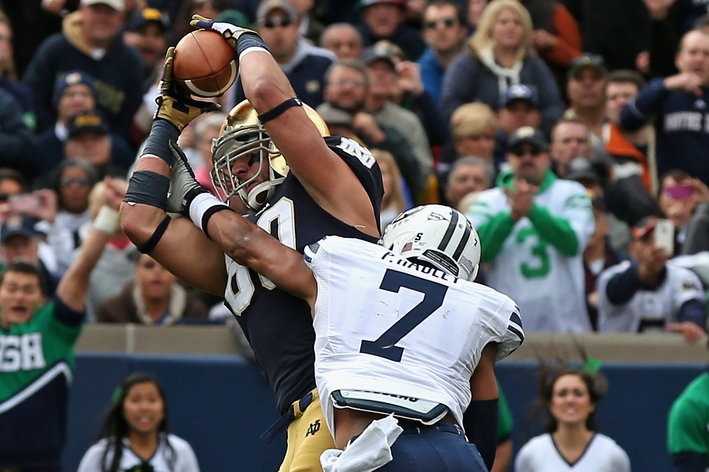 BTSC's Neal Coolong wrote during the Combine the Steelers drafting Eifert at 17 could simply be a case of taking the best player available.

Heath Miller is 30 years old and coming off of a brutal knee injury suffered at the end of the season, tearing his ACL, MCL, and PCL ligaments. Even if his rehab goes according to plan he won't be able to work out on that knee until July at the earliest and it's likely that he would miss the first month or so of the season if not more. In the short term David Paulson would be his replacement but he is a serious step down in talent. In the long term Tyler Eifert would be an excellent replacement for Miller.

Tyler Eifert was clearly the best tight end on the field at the combine. He measured in at 6-feet-6 and 250 pounds, and managed to run at 4.68 forty yard dash. He is a complete player and will be the first tight end taken and a first round pick in the 2013 draft. The question is that if the available pass-rushers are all gone as well as Jonathan Cooper and Kenny Vaccarro should the Steelers take Tyler Eifert over the available wide receivers? He does come with less questions than Cordarelle Patterson (raw player), Keenan Allen (injury and drop in production), and Tavon Austin (lack of size).