Steelers Salary Cap: After a slew of signings, the Steelers still may make some moves

With the first official day of the new league year officially in the books, here is a quick snapshot of the team's current cap situation entering day two.

Share All sharing options for: Steelers Salary Cap: After a slew of signings, the Steelers still may make some moves

After what felt like an eternity, the March 12 deadline came and went with all the free-agency one could hope for. When the dust finally settled, here is where the Pittsburgh Steelers currently stand with the NFL salary cap of $123 million. 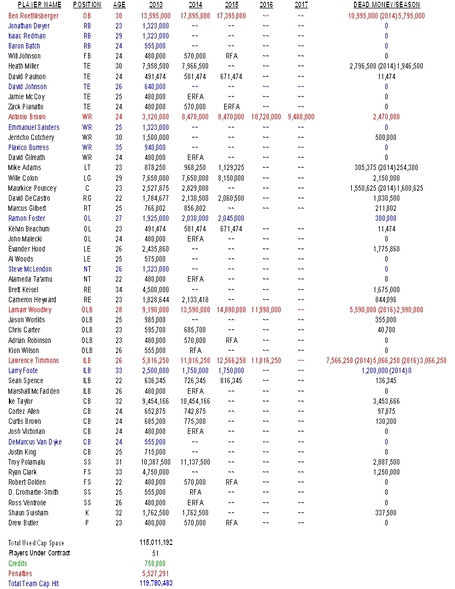 As of 4 PM ET yesterday, all teams are now required to be cap compliant with the top-51 salaries on the roster. The Credits column represents the unused cap space from 2012, and the Penalties designation represents dead money associated with 2013, like the releases of Chris Rainey and James Harrison.

Base-level RFA tenders have been offered to Emmanuel Sanders, Steve McLendon and Isaac Redman. Jonathan Dwyer received one as well, but he is the only one to sign his so far. ERFA tenders were handed out to Baron Batch and DeMarcus Van Dyke, with Van Dyke already signing his tender per reports.

Mike Wallace signed a prime-time deal in Miami, but the Steelers found another receiver in one of their other UFAs - Plaxico Burress - who was reported to signing a one-year minimum deal, as did TE David Johnson. Larry Foote and Ramon Foster received three-year deals, although actual contract amounts have not been disclosed; numbers in charts are best-guesstimates.

Aditi Kinkhabwala of NFL.com reported from Twitter Foote is scheduled to receive $2.5 million in the first season of his deal. To add his contract to this chart, I treated the base salaries as $1.3 million (2013) and $1.75 million (2014 and 2015), with either a $1.2 million signing bonus or 2013 roster bonus. Foster was reported to receiving three years for a total of six million, with $900k coming as a signing bonus. Stay tuned for updates as more specific information is leaked over the coming days.

With just little over three million in cap space to work with, the second day of free-agency is bound to hold just as much excitement as day-one. Keenan Lewis is still a free-agent, and he has been torturing fans through his social media accounts over who his new team will be; however, a sudden influx of new cap-casualty names into the free-agent pool yesterday may have diminished Lewis marketability a bit. While his price tag is still expected to be more than the team can afford, a lot can happen between now and later.

Another few names should be expected to be added anytime now. The Steelers are still without a long-snapper as Greg Warren is an unrestricted free-agent. The CBA would determine his base salary minimum to be almost a full million, so the team may be considering a switch to someone younger despite Warren's career-consistency. The team still is expected to sign at least one more quarterback, with Charlie Batch confident in his return and recently acquired John Parker Wilson.

Also, expect some number-crunching. The insistence over Willie Colon's release has gotten even louder, with many now pointing their fingers at today for him to be released. The Steelers could still restructure, or extend-then-restructure, some of their larger contracts to clear some more cap space, including Colon, Troy Polamalu and Heath Miller; but as slow as the team was to restructure LaMarr Woodley's contract, releases may be more realistic options.

The team will also be preparing to sign their upcoming draft-class, and we could still see return visits from players like Max Starks, Doug Legursky or Stevenson Sylvester. Continue to follow BTSC for all free-agency updates.