Back-up quarterbacks and long-snappers isn't exactly huge news, but the Steelers are clearly more active in this free agency period than they have been in a long time.

With contracts and dollars flying around (relatively speaking), the Steelers have put together one of their most active free agency periods ever in just one and a half days into it.

Reports have cornerback Keenan Lewis talking deal with his hometown team, the New Orleans Saints. Rashard Mendenhall took his ball and left town on the speed of a new deal with the Arizona Cardinals.

Recent reports indicate Cowboys outside linebacker Victor Butler is coming for a visit soon, but whether that will turn into anything remains to be seen. Dan Connor was in Pittsburgh, too, and the Steelers signed Larry Foote just a few hours after that. 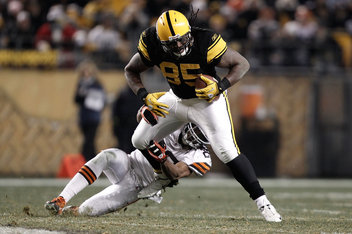 The Steelers signed tight end David Johnson on the first day of free agency. Look back over what else happened in one of the most active days in team history.

What else is coming today? We don't know, but we're going to be here all day watching over it, so keep your work browser open on BTSC, ensuring your respective employment authority figure doesn't notice, and we'll keep you informed.