With Sean Spence's future still in question the Steelers re-signed Larry Foote as a stop gap for their buck ILB position. It wouldn't be out of the question that the Steelers still consider an ILB prospect early in the draft. Arthur Brown might be one of those prospects. Prior to his Pro Day the Steelers reportedly met extensively with Brown over dinner. The following is a breakdown of Arthur Browns' strengths and weaknesses.

Arthur Brown was one of the highest rated high school players to ever come out of Wichita, Kansas. He eventually found his way to the University of Miami (Fl.). After redshirting a year Brown decided to leave Miami when his name came up in an illegal benefits investigation of an ex-booster Nevin Shapiro. He transferred back to his home state of Kansas to play for Kansas State. After sitting out a year due to NCAA transfer rules Brown started for the Wildcats in 2011 finishing the year with 101 tackles, 9.5 TFL, two sacks and one interception. He was named the Big 12 newcomer of the year. In 2012 already a potential second round pick Brown chose to play one more year at Kansas State. Brown's amassed 100 total tackles, seven TFL, one sack and two interceptions returning one for a touchdown. He was named the Big 12 Defensive Player of the Year.

Weighing in at the NFL Combine at 241 pounds, Brown answered the question if he could put on weight. Due to a shoulder injury he didn't work out at the Combine. He did participate in Kansas State Pro Day March 12. There he ran the 40 in the 4.58-4.62 second range, and posted 21 reps in the bench press. More importantly he showed the same movement skills he displayed on tape.

Arthur Brown on tape is impressive. In pass coverage Brown has very efficient footwork. He is the athleticism to flip his hips and stay with running backs on routes. In zone coverage Arthur Brown excels because of his excellent short area quickness. His quickness was displayed against West Virginia when he was asked to cover Tavon Austin on underneath routes. He displays impressive awareness on tape often pointing out coverage and following the QBs eyes to the ball. Brown has the ability to be a sideline to sideline linebacker because of his impressive lateral agility. He also shows the ability to slip blocks as well. The following play highlights Browns agility.

In this play Arthur Brown shows off his ability to disengage from blocks and his ability to play sideline to sideline. As the play begins Brown quickly reads run because the offensive lineman comes downfield to him. He uses a swim move and his lateral agility to slip the block. Then noticing the running back has no desire to become a receiver he sees a lane to the quarterback and shows off his impressive closing speed. On tape there are other examples of Browns ability to close when trailing a play and his ability to avoid blockers. 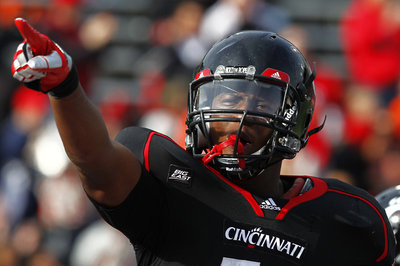 We break down several players who will be taken in the 2013 NFL Draft.

Despite being viewed as undersized by many Arthur Brown is extremely physical and is ability to take on and disengage from blocker well. He uses his natural leverage, lower body strength and good technique to attack lead blockers in the hole. The following play highlights this.

In this play Brown clearly recognizes because of the down and distance the play is likely to be a running play. When he sees the lead blocker go to the hole he attacks it at full speed. Brown wins the battle of leverage getting underneath the block. He minimizes his surface area and keeps his shoulder free. He finally uses his momentum and runs through the block. On tape there are many more examples of Brown playing downfield and attacking blocks. He does surprisingly well at engaging and then disengaging to make a play. His physicality earned him the nickname "The Judge" by his teammates.

Despite being technically refined Arthur Brown does have some weaknesses. His size will limit him to being a zone defender against many tight ends in the NFL. On tape his aggressiveness is appreciated but he will also over run a play because of it. In an effort to make a play Brown will shoot a gap or guess wrong this will leave an opening in the defense. While this doesn't happen constantly he did do this at least twice in every game I watched. When attacking blocks Brown was incredibly successful when he was allowed to run at the block, however when met in the second level it was much harder for him to disengage from a block. He also had more difficulty disengaging from blocks when meeting them square instead of attacking one half of the blocker.

His physicality earned him the nickname "The Judge" by his teammates.

Arthur Brown was a very physical player at Kansas State despite his size. He can either attack a blocker in the hole or use his agility to get around them. As a trail defender he is equally impresses. He has good lateral agility and shows the ability to play sideline to sideline. In the passing game he displays a good awareness of routes and has the short area quickness to excel in zone coverage. While Brown is over aggressive at time I believe he will be a good player in the NFL. He added weight without loss of athleticism confirms to me that Brown can play either the Buck or Mack in the 3-4 defense. Browns draft stock is different depending on what evaluator you look at but he should be draft anywhere from picks No. 15-50.