It's been a long three days, and the Steelers have been more active than in years-past, although to mixed reviews from its fan-base. Here's a look at the updated numbers as they stand.

Despite losing their third starting player to a new team in as many days, the Pittsburgh Steelers have not exactly been losers of NFL Free Agency, and it appears they are not done yet.

With the first three days of free-agency in the books, the Steelers creep ever closer to the salary cap limit. Here is a look at the updated numbers as of now. 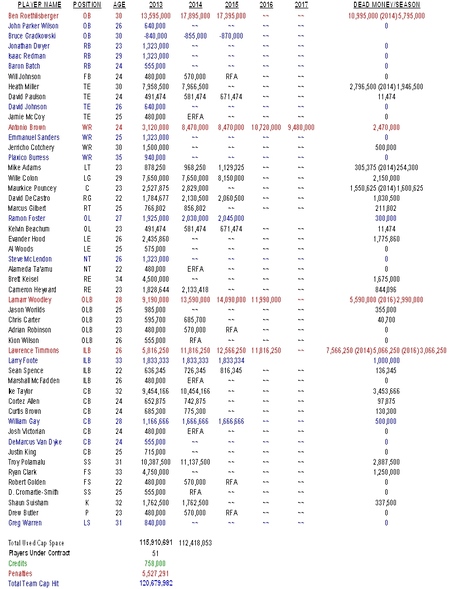 There are still a few credits available to the team, although they will be applied later in the process. The same can be said for the savings from releasing Willie Colon. The team will save money from him eventually, but for now his salary must be held against the cap. His savings will be applied after June 1st.

These aren't the only players on the roster. Only the top 51 salaries are held against the cap for now. Other players currently under contract which are ignored by the cap for off-season roster purposes:

The Steelers still have a draft-class to sign yet later this off-season, and with holes on the roster yet to fill, they are not done in free-agency quite yet. However, with tight cap constraints, more new signings will mean more cap space needing cleared. Colon's savings are expected to be enough to get the draft picks under contract, keeping the team about $2.5 million under the cap - exactly where they will want to be heading into the season.

By all rights, the team could simply fill the roster with first and second year players and enter the 2013 season still-cap-compliant. However, with several unsecured priority positions left to fill on the roster, Pittsburgh is expected to remain a player in free-agency.

Continue to stay up-to-date will all free-agency news with Behind The Steel Curtain.