In which the author demonstrates, via the stats she loves so much, why this is a much more exciting signing than it seems at first glance.

Share All sharing options for: Matt Spaeth? Steelers Fans, You're In Luck

Steeler Nation is in full panic mode at the moment. Wallace is gone? Okay, fine. Harrison is gone?!!! Who saw that coming?!! Keenan Lewis is gone? Whaaaat? Emmanuel Sanders has visited the Death Star and has an offer sheet?! Kill me now!

And where is all the money the front office saved? It is being used to sign a bunch of no-goods and has-beens!

Or maybe not. The latest signing, for example, is for a tight end no one was sorry to see leave, except perhaps Ben Roethlisberger, who can't seem to get a tall receiver to save his life. His name seldom came up, and Steeler Nation appeared ready to put the Spaeth era behind them.

But lo and behold, he's back, and while he was in Chicago last season he quietly had a great year. But don't take my word for it—let's look at the numbers.

Pro Football Focus rated Spaeth with a +10.6. Those of you who have looked at any of their ratings will be saying "Wait just a minute, that's pretty good." Yes, it is. It is better than the rating for the following well-respected tight ends:

All play for playoff teams, if you notice. There are many others I'm leaving off who were not on playoff teams, such as Jimmy Graham of NO. And get ready, this one is going to hurt. He also rated substantially better than our own Heath Miller. In fact, he was No. 7 in the league out of 62 TEs ranked.

They didn't like everything, naturally. The only metric in which he didn't have a positive ranking was in receiving, which is kind of a pity under the circumstances.

But let's look a bit deeper. Looking at his week-to-week rankings one notes he had one bad game, in Week 10 vs. Houston. He had a spectacular game in Week 12 vs. Minneapolis, even rating positively in receiving. So let's take a look at what about his receiving they are downgrading him for.

I first checked out his drop rate. I had to take all the filters off, because obviously he didn't get thrown at much. And sure enough, he was only targeted nine times, and dropped one out of seven passes PFF deemed catchable. That gave him a drop rate of 14.29, well above the league average, although well below his teammate Kellen Davis' 29.63 drop rate. And actually it was above Jimmy Graham's 15.0 drop rate as well...

On the other hand, in their Signature Stat of Pass Blocking Efficiency, Spaeth, who had 144 snaps in which he was expected to pass block, had an excellent Pass Blocking Efficiency percentage of 96.6, good for No. 16 in the league, out of 44 ranked. Once again this put him ahead of his teammate Kellen Davis, as well as Jason Witten, Tony Gonzalez, etc., and yes, Heath Miller.

Let's see how some other sites ranked him. Football Outsiders liked him better than David Paulson. Let's leave it at that... Pro Football Reference gave him an AV of 2 for 2011 and 2012. Hmm, not terribly inspiring. He didn't make it onto the Advanced NFL Stats chart, since they have only the No. 1 TE for each team ranked.

So finally, let's look at how his stats have progressed since he was drafted, at least according to PFF. 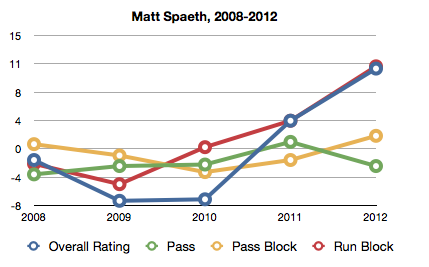 His drop rate has varied from year to year. Twice he had a drop rate of 0.0% (on half a dozen passes or so); his highest was 2010, at 18.18%. But his progress as a run blocker, and his overall rating, have both soared since being in Chicago.

I'm more than happy to take someone back who seems to have improved so much. Here's hoping he has a banner year in the Black and Gold, without Jeff Reed to lead him astray. And the photo may not be the picture of grace, but that was a touchdown, y'all : )