In which the author re-examines her conclusions from before the 2012 season and finds them unduly pessimistic.

There was a great deal of uncertainty in Pittsburgh last summer as to who would actually man the defensive front seven. But Pittsburgh wasn't the only team with question marks. Terrell Suggs was out for Baltimore for the season, or so most of us assumed. Scott Fujita was suspended in Cleveland. Cincinnati was in flux. So judging the relative strengths of the four teams in this area wasn't just a matter of comparing the players, but also a matter of guessing who those players would be.

And Baltimore distinctly muddied the waters. By mid-season, Suggs was in, Ray Lewis was out, and they were listing their depth chart in a 4-3 rather than their traditional 3-4 alignment. Scott Fujita returned in Cleveland, only to promptly incur a season-ending neck injury. Casey Hampton defied the odds and the pundits and was the starting NT for the season. (Some also thought this defied reason, but that's a different article.) And in Cincinnati, rookie problem child Vontaze Burfict played his way into the rotation. thus justifying the chance the Bengals took.

It can be pretty difficult to separate the performance of the front seven from the defensive line. But for the moment, let's confine our gaze to the guys plugging up the middle. What conclusions did I come to, pre-season, and how did I reassess at mid-season?

So how did they end up? We all know Pittsburgh ended the season with putatively the No. 1 defense in the league. And they earned it, too, according to the stats the NFL uses to make their assessment. But let's look at what it really meant, in terms of how well the units functioned. Most of my pre-and-midseason assessments were based on the collective "worth" of the individual players, but let's look at the figures for the lines as a unit. First up is Football Outsiders, who ranks the lines for both run and pass stops. The first bar in each case is the mid-season ranking; the second bar is the end of the (regular) season ranking: 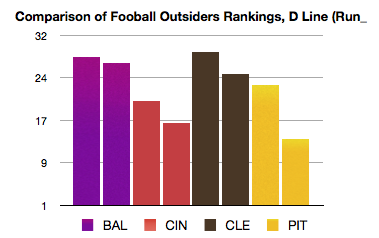 Every team improved in this metric, although the Steelers improved the most, the Ravens the least. Since this is a ranking of the 32 teams, this doesn't take place in a vacuum. So the AFC North improved in relation to the rest of the league in the second half of the season, none more than the Steelers. 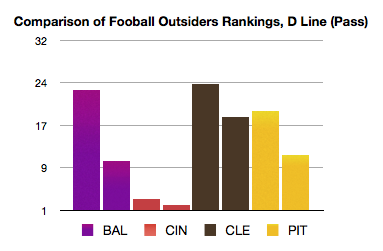 Once again every team improved. The Bengals barely had anywhere to go, as they were already No. 3, and moved up to No. 2. The most improvement was by the Ravens, the least (other than the Bengals) by the Browns.
If we were to average the run and pass rankings, the final "Power Ranking" would be:
Cincinnati Bengals (No. 9)
Pittsburgh Steelers (No. 11)
Baltimore Ravens (No. 19)
Cleveland Browns (No. 22)
Let's look at another metric and see what it says. Next up, Advanced NFL Stats.

Advanced NFL Stats have their own metrics, and I've chosen for this article the two which seemed most relevant, overall Defensive Win Probability Added and Defensive Run Win Probability Added. If I understand them correctly, the first is how much the defense reduces the other team's offensive Win Probability, the second how ineffective they render their rushing attack. Unfortunately, the Adv. NFL Stats folks don't break down the units, so this is for the defense as a whole. But I figured the defensive front are the ones most charged with stopping the run, so that seemed to be the stat that made the most sense. I'll bring in their pass coverage stats later on. Their overall defensive rank was:
Cincinatti Bengals: (No. 5)
Pittsburgh Steelers (No. 8)
Baltimore Ravens (No. 16)
Cleveland Browns (No. 18)
These rankings are heavily influenced by pass coverage, however. If we rank the defenses based on the chart above, which is more slanted towards line play, we come up with the following:
Pittsburgh Steelers (No. 3)
Cincinnati Bengals (No. 6)
Baltimore Ravens/ Cleveland Browns (T No. 14)
Although the rankings are a bit different, this is well in line with the Football Outsiders lineup.
Finally, Pro Football Focus. Once again, they don't break the defense down into line play vs. total defense, so I've chosen to give the overall ranking plus the run coverage:

They like the Ravens' run defense a lot better than anyone else does, and for that matter they like the Browns better than anyone else. If we average their rankings we come up with this:
Cincinnati Bengals (No. 3)
Pittsburgh Steelers (No. 11)
Cleveland Browns (No. 13)
Baltimore Ravens (No. 15)
So just for the heck of it, let's average all those averages. Here's what we get:
Cincinnati Bengals (No. 6)
Pittsburgh Steelers (No. 8)
Baltimore Ravens (No. 16)
Cleveland Browns (No. 17)

However you look at it, I was unduly pessimistic about the Steelers' defensive line in both my pre-season and mid-season rankings. However, this is scarcely surprising, since if we look at the difference between the Football Outsiders mid-season assessment and the one at the end of the season, we can see they improved tremendously over the second half of the season. 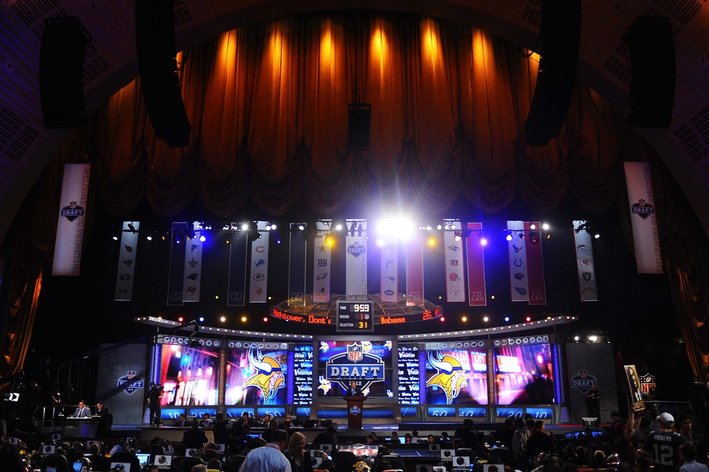 Teams have made some moves in free agency, Big Jay now looks at their draft needs

But the other thing to note is, prior to the season I didn't have any option except to do a sort of cumulative ranking of the players in each line and make a judgment based upon that. My midseason re-assessment continued this, with the exception of bringing in the Football Outsiders line ranking. But as we all know, the function of a unit can end up being more or less than the sum of its parts, for any number of reasons. As they played together I think the Pittsburgh line ended up playing better than the sum of its parts.

That's it for the moment. The next post will look at the linebacks, in a bit more individual detail. If you want to check out the original articles from the preseason and midseason, you can find them here and here.